All week long, Ed Glaser, the author of How the World Remade Hollywood, has been discussing just why remake and remix cinema is great. Here’s our final segment.

B&S: Are there any movies that didn’t make it into the book?

Ed: I wanted to cap it at 75, so there were definitely some I couldn’t fit. In many cases it was a matter of not wanting to do too many “duplicate” movies. I did three takes on Superman and Star Wars, but generally I tried to limit the number of remakes of a particular film to one, maybe two. So there are several other Rambos and James Bonds and Batmen that had to sit this one out.

There were also some I would like to have covered that I simply couldn’t dig up enough information about — and didn’t have the contacts where I could reach out to the people involved, as I did with other movies. For example, there’s the Alain Delon Zorro film, which would have gone in the “Capes, Conquerors, and Comic Books” section. And there’s a Thai Charlie’s Angels remix called Chai Lai Angels. Another time!

B&S: You could do a whole book on Italian Conan remixes.

Ed: It’s like you said, had already made the peplum movies, so your Ators or your Thors the Conqueror are basically just redressed sword-and-sandal flicks.

B&S: What about OK Connery?

Ed: It’s the most “all-in” Eurospy film ever made! Sean Connery’s brother plus five stars from the official Bond series! Producer Dario Sabatello was willing to throw a lot of money around to make it happen. The Bond supporting cast weren’t paid a lot in the UK for their roles. So Bernard Lee and Lois Maxwell and so on were happy to do it because they were paid more for OK Connery than they were for the actual Bond films. And that movie is an enormous amount of fun. 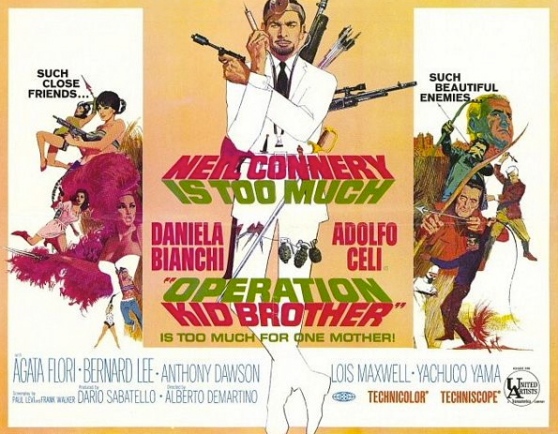 B&S: Even giallo makes its way to Turkey with Aska Susayanlar: Seks ve Cinayet, which is nearly a scene for scene remake of Sergio Martino’s The Strange Vice of Mrs. Wardh. How did they even find that movie? Maybe through the photonovels?

Ed: So, interesting thing. There’s a Turkish Snow White film Pamuk Prenses ve 7 Cüceler that’s a complete live action remake of the Disney movie. And what really surprised me was that it includes scenes that were planned for the Disney version but never actually animated. That had me absolutely baffled for a while until I discovered that those sequences were in the tie-in children’s books — both here in the States and in Turkey (some of which were bootlegs). So it’s pretty clear that the filmmakers saw at least one of those books and incorporated the “missing” material based on that. Before the days of VHS and DVD, it would have been handy to have a book version of the film to work off of. So I wouldn’t be surprised if tie-in photonovels were occasionally used when shooting international remakes.

B&S: With the advent of digital filmmaking, is it easier or harder for these movies to be made?

Ed: The world is more connected now so it’s very difficult. Certainly it’s no longer the Wild West it once was. What’s happening more is that Hollywood has discovered that there’s money to be made overseas with their existing IP and so they’ll partner with — or license that IP to — filmmakers in other markets. Thus the kind of stuff that you’re seeing in Bollywood now tends to be more officially licensed than it used to be. (I’m sure that’s not the case 100 percent of the time.) But there are major instances of that happening. There was a remake of the movie Knight and Day, and there’s been a Rambo film in the works for a number of years that I think is still in pre-production. There are specific deals between Fox and studios in India to make these kinds of films, and similar things happening in China, leading to movies like High School Musical China.

B&S: Does it feel different now because there’s less of a hunt for these films?

Ed: I appreciate their newfound availability. While I was writing my book both Robowar and Shocking Dark came out on Blu-ray. That was wild, because at the time I had Shocking Dark on a Japanese VHS tape and Robowar was just digital, because you couldn’t get a physical copy for love or money — at least an original one. The availability is fantastic. I think the main difference is that it’s now a lot easier to go from one film immediately to another, rather than digging around and waiting to see if another one will turn up from a grey market VHS dealer. But there’s still a lot of history behind these movies that remains untold. And a film being available on YouTube doesn’t necessarily alter that.

B&S: I think now we can share them more easily. It reminds me of what Guillermo Del Toro said when he first saw Zombie that none of his friends believed it was a real movie. Now you can show people these movies.

Ed: There is something to that. And there’s also a certain amount of good-natured one-upmanship that can happen with friends who enjoy similar kinds of movies — “Yeah, but have you seen this?” That can be a fun way to kind of exchange movies but it’s great that the material is available and is more shareable than it once was.

B&S: Where should someone start with remakesploitation?

Ed: I think The Last Shark may be a good start. It depends on how comfortably you want to ease in and what your favorite genres are. If you want to be delighted, Vinni-Pukh, the Russian Winnie the Pooh is probably the most wonderful thing that I cover in my book. 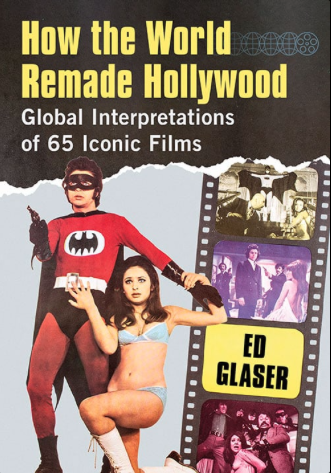 You can get Ed’s book, How the World Remade Hollywood, from McFarland Books. Here are the films that he covers (to see our thoughts on movies we’ve watched, just click the hyperlink):

Monsters, Maniacs, and the Macabre

Androids, Aliens, and the Apocalypse

I hope that this article allows you to discover the world beyond our borders and how other filmmakers reinterpret pop culture. To see some of these movies and hear from Ed, check out Deja View: Remakes and Rip-Offs of Your Favorite Films.