An Italian ripoff of both Predator and Terminator starring Reb Brown (Yor Hunter from the Future), directed by Bruno Mattei (The Other Hell), from a script by the husband and wife team of Claudio Fragasso and Rosella Drudi (who concocted Troll 2, a movie that is at the same time not a sequel and not about trolls)? You had me at Italian ripoff.

Major Murphy Black (yep, Reb Brown) is the leader of a team of commandos that are on a mission in the jungle. Only Mascher knows why they are really there — to test his new invention, Omega-1 (who is played by writer Claudio Fragasso), a robot that looks like a BMX racer with scuba gear.

But first, they have to rescue Virginia (Catherine Hickland, Witchery) from soldiers who are overtaking her hospital camp. Just like Predator, the team easily kills all of the terrorists/evil guys/generic villains, but it’s just to set up the real story. Yep, Masher wanted to see how his creation would stack up against Murphy.

The robot is smart enough to kill everyone, even his creator, and destroy the one device that is supposedly the only thing that can kill it. Also, Omega-1 is really a cyborg with he brain of Murphy’s old friend, Lt. Martin Woodrie.

Only Murphy and Virginia survive, despite numerous attacks by the cyborg. At the end, the cyborg corners Murphy in the jungle and shows him how to initiate his self-destruct sequence. And that’s that.

Are you wondering just how close this movie is to Predator? 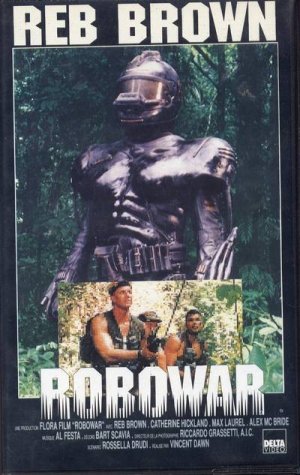 There’s your answer right there.

Even I can’t defend the fact that I waste nearly ninety minutes of my life watching this movie. On my deathbed, I will pull my family close and whisper, “I only regret one thing. Robowar.” Hopefully, they realize that I mean a Bruno Mattei movie and don’t think that it’s a Rosebudian cipher and they have to go on a quest to discover what I mean. I also hope that none of them watch Robowar.

That said, it is on Amazon Prime.