At nearly half the budget of Star Wars — $6 to $7 million dollars — Message from Space was the most expensive movie in Japanese history up until 1980. At the time, it was routinely panned by the critics. Yet watching it nearly 40 years later, I was struck by just how ambitious, fun and strange it is. 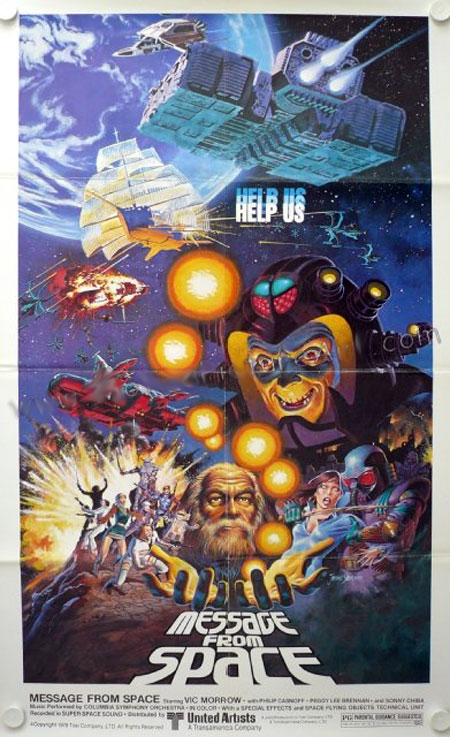 Jillucia was once a planet of peace, but that was before the Gavanas Empire turned it into one of their military bases. Kido, one of the planet’s leaders, sends eight Liabe seeds into space to find soldiers strong enough to liberate the planet from the steel grip — and faces — of the Gavanas. Princess Emeralida (Etsuko Shiomi, Sister Street Fighter) and Urocco follow them into space in a space galleon.

We meet some space racers — Shiro (Hiroyuki Sanada, Shingen from The Wolverine) and Aaron — and a spoiled rich kid named Meia who are chasing one another through some asteroids. These guys mess up the Kessel Run and wreck, but then find some Laibe seeds in their ships.

General Garuda (the name means phoenix and the role is played by Vic Morrow, who graced the screen in films like 1990: The Bronx Warriors and Humanoids from the Deep before dying while making Twilight Zone: The Movie) is a drinking man, embittered by the loss of Beba-1, his robot. He orders that a rocket send the body of his faithful companion into space, which gets him in trouble with his superiors, who see it as a waste. This leads him to retire and take up a bar stool on Milazeria, where he also finds a Liabe seed.

In that very same bar, Jack puts the pressure on Shiro and Aaron to repay their debts, as he himself owes the gangster Big Sam (no relation to Jabba) plenty of dough. Oh — he also finds a seed. To get the cash, they agree to take Meia to a forbidden zone where she can watch fireflies. On the way, the Gavanas attack, destroying the space galleon and a police ship.

All of our heroes battle, but when the seeds — and Garuda, who is sleeping off his drinking — reveal themselves, Emeralida explains that the seeds have chosen them to liberate her planet. Garuda responds by leaving in a huff, but Beba-2 promises to get him to change his mind. There’s supposedly a Chris Isaak cameo as a gambler in the bar scenes, way before he became famous.

What follows next is a confusing mess of double crosses and people trying to get rid of their seeds and ten-year-old Sam would probably be not paying attention, just wishing that some aliens would show up and have a laser battle. Luckily, the Gavanas do show up to declare war on Earth and Garuda realizes his destiny is to defend his home planet. And to make the film a million times more exciting, they meet Prince Hans, the rightful leader of the Gavanas. He doesn’t have their silver skin, but he is played by Sonny Chiba.

Urocco, Jack, Shiro and Aaron fly to Jilutia, with Shiro and Aaron’s ships mounted on Mayah’s ship. As they near their destination, Mayah’s Leyabe seed explodes, causing the ship to crash on a planet in the Bernard system. There they find what appears to be a Gavanas warrior without a metallic skin, and wearing a Leyabe seed around his neck. The warrior introduces himself as Prince Hans, the rightful heir of the Gavanas’ throne. He explains that Rockseia killed his royal parents and took the throne for himself.

The Emperor and Empress of the Gavanas meet with Garuda, who challenges one of their warriors to a duel. After walking less than ten paces, that warrior sneak attacks Garuda, who shrugs off a laser beam to the back (it must have been his snazzy military uniform and phoenix patch). Garuda bests the soldier, yet gives him mercy before the Emperor wipes the disgraced soldier out. The leaders — who had to have inspired Prince Zarkon and Haggar from Voltron — destroy the moon and demand that Earth surrenders.

Garuda, Jack and Beba-2 leave Jilutia but then turn around. All three parachute to the surface. In the meantime Maya’s ship approaches Jilutia, making the ‘chicken run’ approach used earlier by Aaron and Shiro. The pair separate their ships near the surface, and the three ships pull up and fly through a rocky canyon, simulating a meteor impact. The ships then re-connect and land. Urrocco finds the Jilutian survivors hiding in the hull of a space galleon. Urrocco and the others meet Jack, Garuda and Beba-2. They realize there are now six Leyabe warriors, but wonder who the other two might be.

Finally, it’s time for space battles and sword fights. Sonny Chiba goes off slashing everyone with his sword. There are suicide runs — Meia uncomfortably says, “They don’t call me kamikaze for nothing.” — and ships blowing up and planets exploding and all manner of space opera nonsense, ending with all of the heroes being saved from death by the seeds.

Message from Space was popular enough that it became a TV series in Japan. Over here, it didn’t fare as well. It’s a crazy looking movie, with gigantic sets, gorgeous costumes and lunacy aplenty, like people skydiving from space and silver faced aliens doing battle with drunken space captains and a rich girl and dudes who just like to race rockets.

Director Kinji Fukasaku (Battle Royale) really has a great time with the budget he’s been given and wastes none of it. It’s a glitzy, gaudy spectacle that the cynical amongst us would choose to deride and make fun of. I chose to watch it through younger eyes and find a fun and infectious joy at the heart of the film. Sure, it’s no Star Wars, but it’s still a fun Saturday afternoon film.

One thought on “ATTACK OF THE CLONES: Message from Space (1978)”