The Black Hole is more than just the first Disney movie to be rated PG and to feature swearing (as well as one of the most expensive they’d produced at that point). It’s also a dark film, one closer to Event Horizon than Escape from Witch Mountain.

The USS Palomino is near the end of its long journey through deep space as they discover a black hole. Its crew — Dr. Alex Durant (Anthony Perkins, Psycho), Captain Dan Holland (Robert Forster, Jackie Brown), Lieutenant Charles Pizer, journalist Harry Booth (Ernest Borgnine, The Devil’s Rain!), Dr. Kate McCrae (Yvette Mimieux, The Time Machine) who has ESP and a robot named V.I.N.C.E.N.T. (Vital Information Necessary Centralized) who is voiced by Roddy McDowell — somehow escapes the gravity of the black hole, along with a gigantic ship, the USS Cygnus.

Boarding what they believe to be an abandoned ship, they meet Dr. Hans Reinhardt (Maximilian Schell, Judgment at Nuremberg), a scientist who has studied the black hole alone for twenty years. Most of the human crew had gone back to Earth, other than Kate’s father, who stayed onboard until he died. Reinhardt’s goal is to fly the Cygnus through the black hole.

That’s all a lie — the human crew was lobotomized and is now the robotic drone army that prowls the Cygnus. The only others are Old B.O.B. (BiO-sanitation Battalion, voiced by Slim Pickens) and Maximilian, a demonic red robot eager for combat.

Only Durant wants to stay behind and help, but once he learns that the crew is human (the scene where he removes the reflective faceplate of a drone to see a zombie face is pretty horrific for a Disney film), he tries to run with Kate. Maximilian catches up and kills him and Reinhardt orders Kate lobotomized.

Holland, V.I.N.C.E.N.T. and B.O.B. rescue Kate just as Booth tries to leave alone, damaging the Palomino. As a meteor storm picks up, the Cygnus begins to break down. The survivors make their way to a small probe ship as Reinhardt is trapped beneath wreckage. His crew looks on, unmoved, as he struggles.

Once inside, we see visions of Heaven and Hell, where Reinhardt and Maximilian become one amongst the flames. Then, an angel flies through a crystal tunnel and creates a white hole, which we see the probe emerge through. Finally, we see the ship fly toward a new planet in an ending which can only be described as Disney’s 2001. Actually, that makes it sound stupid. The imagery of Hell is super intense, with robed figures watching Maximilian rise from the bowels of Hades. I could watch it on loop all day long.

So what really happened? In the novelization of the film, as our heroes crosse the event horizon, all matter ceases to exist. That said, Kate’s ESP links their minds, allow them to survive while their atoms are scattered. The Whitman comics adaptation ends with the crew reaching a parallel universe where they encounter alternate universe versions of Reinhardt, Old B.O.B., Maximilian and Kate’s father. In fact, this series went on past the movie, hinting at perhaps what a sequel would be about. Finally, in the Disney Read-Along album and book, the crew survives, with Captain Holland saying, “We’ve been trained to find new worlds. Let’s go find one for ourselves!”

NOTE: I listened to TONS of Disney storybooks and books on record as a child. Just the sound of the voice at the beginning of this sends me into warm, wonderful feelings of a childhood day spend with my feet under the covers, listening to this story over and over again.

Disney even put out a soundtrack for the movie that features the entire story, as well as dialogue not in the film!

There’s also an AMAZING Disney Sounds of Outer Space record that I listened to regularly. The album art directly references the robot drones from The Black Hole.

Mego — who famously declined making Star Wars figures — made a complete line of figures for the movie. The Mego Museum has a great page devoted to these toys (there were also large-scale human figures). Famously, my brother had V.I.N.C.E.N.T. but refused to allow anyone else to play with the figure. There’s also a Halloween photo of him wearing a visor that made his five-year-old head look like that little bot. I won’t share it here in fear of the reprisals that he could send my way. After all, I dressed as Papa Smurf one year.

Even crazier, Disney hired Jack Kirby to adapt the film as part of their “Walt Disney’s Treasury of Classic Tales” newspaper strip, along with takes on The Watcher in the Woods, Condorman and The Last Flight of Noah’s Ark. The art for these is stunning and well worth hunting down. 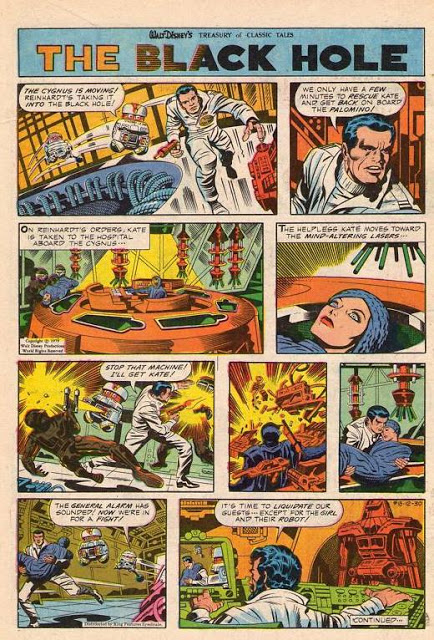 For years, I believed that The Black Hole was a slow-moving effort, much like Star Trek: The Motion Picture. But after watching it again, I was taken with how quickly it moves and how gorgeous the visuals are, thanks to solid direction by Gary Nelson(who also was in the chair for the original Freaky Friday). The film is big and brash and bold, the way only late 70’s movies can be — the movie starts with an overture, one of the last films to do so! It certainly is no ripoff of Star Wars, but obviously got made because of that film’s success.

Notorious ruiner of fun and pompous asshole astrophysicist (assholetrophyicist?) Neil deGrasse Tyson claims that this is the least scientifically accurate movie of all time: “They not only got none of the physics right about falling into a black hole, had they gotten it right it would have been a vastly more interesting movie.” I’ve said it before. I’ll say it again. Fuck Neil deGrasse Tyson.