The Devil’s Rain! is a movie that could only have been made in 1975, uniting old Hollywood royalty, television stars, the visionary director of The Abominable Dr. Phibes and the Church of Satan in the Mexican desert.

It is not a perfect movie. You can’t even say that it has plot holes, as that would require something of a coherent plot — a fact director Robert Fuest was all too aware of. On the sparkling commentary track which accompanies the new blu-ray release from Severin (picked up from the Dark Sky DVD release), he speaks about discussions with the writers (Gabe Essoe, James Ashton and Gerald Hopman, whose only credit is co-producing Evilspeak, so one assumes that he is Satan) where they assured him that the script made perfect sense. While Fuest claims that he did what he could to clear up his issues with the film, what emerged was a movie that effectively decimated his promising directorial career.

But you know what? I embrace plotholes the way some critics hold dearly onto their Criterion collection films and back issues of Premiere. There’s no way I can be objective about The Devil’s Rain! The only box it doesn’t check for me is a disclaimer stating that it’s based on a true story.

The film begins with close-ups of Bosch’s painting The Garden of Earthly Delights, along with the wails of the damned as they gnash their teeth in Hell. Then, we’re dropped into the lives of the Preston family, who have suffered under a curse for hundreds of years.

Turns out that at some point in the 18th century, the family screwed over Jonathan Corbis (Ernest Borgnine, Escape from New York), a Satanist who was eventually burned at the stake. He had a book containing the souls of all he had damned, which was stolen by Martin Fyfe (William Shatner, who I don’t need to tell you anything else about). Before he dies, Corbis vows revenge on the Fyfe family, which changes its name to Preston. He’s been stealing them one by one, selling their souls to Satan and trapping them in the devil’s rain. They then become living wax figures with melting eyes and black robes.

That’s how we meet Steve Preston, the leader of the family, who has escaped Corbis to warn his wife  (Ida Lupino, an actress (and director) known for noir classics like The Bigamist and On Dangerous Ground. She often referred to herself as the poor man’s Bette Davis, as she was often offered the parts that Davis had turned down. She refused those parts so many times that Warner Brothers suspended her, so she used that time to learn the craft of directing on set. As roles for her slowed, she became the second female director admitted to the Director’s Guild, following Dorothy Arzner, the sole woman director of Hollywood’s “Golden Age.”) and son, Mark (also Shatner). As the old man tells them to give the book of souls back, he melts in the rain.

So what does Mark do? Well, he takes the book directly to Corbis, challenging him to a battle of faith in the desert. That battle quickly turns into Mark trying to escape, but Corbis’ disciples are too much for him. He shows a cross to the priest, who transforms it into a snake before using a ritual to erase Mark’s memory in preparation for a major ceremony.

Oh the 1970’s — when your main character gets wiped out minutes into a movie because he has to leave town for a three day Star Trek convention in New York. That really happened and I have no idea if that was the reason why Shatner goes from hero to geek in such record time.

Now, Mark’s older brother Tom (Tom Skerritt, Alien) and his wife, Julie, must save the day. Oh yeah — they also have Dr. Sam Richards (Eddie Albert from TV’s Green Acres) along for the ride, as he’s a psychic researcher.

Finding Corbis’ church, Mark watches the ceremony that converts his brother into a wax follower. Anton LaVey shows up under a hood and Corbis turns into a goat, events that sent me scrambling through our living room in a paroxysm of glee. The Severin release also contains interviews with the Church of Satan’s High Priest Peter H. Gilmore, High Priestess Peggy Nadramia and LaVey’s wife and biographer Blanche Barton, all of whom share anecdotes of the Black Pope’s time on the set (indeed, it seems to be a madcap time by studying the photos they show, with LaVey in a jaunty leather cap smiling like a child on Walpurgisnacht) and input on the film. He’s nearly caught, but also discovers that the source of Corbis’ power is the devil’s rain, a glass bottle containing the souls that the priest has captured.

But wait — if he has the devil’s rain, why did he need the book? If he came back to life, why does he need revenge? Look — perhaps these questions will derail your enjoyment of The Devil’s Rain! But not me.

During the final battle — the film moves incredibly fast, making ninety minutes feel like half an hour — the devil’s rain is destroyed by Mark, who finds his lost humanity. Then, it starts to rain. 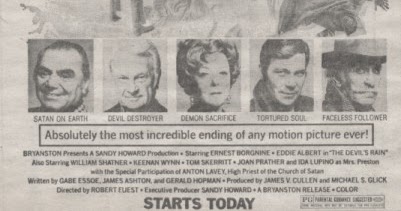 I love how the advertising for this film states that this is “absolutely the most incredible ending of any motion picture ever!” They aren’t lying. Corbis and his followers melt for nearly ten minutes of special effects, turning into piles of goop. It’s over the top and ridiculous and extraneous and totally awesome. This is the kind of scene that I use to determine if I can be friends with someone. If you dismiss it, you’ll never share a beer with me.

Producer Sandy Howard (who also was responsible for Meteor, Blue Monkey and the A Man Called Horse series) based his whole ad campaign around the end of the film, so he took over the final cut to ensure that this sequence would last and last.

Tom and his wife — whose ESP is the sole reason we’re able to see the flashbacks to know why Corbis is doing what he does — make it out alive, but as he embraces his wife, we see that he’s really hugging Ernest Borgnine! Where’s his wife? Trapped in the devil’s rain, in a scene that comes back at the end of the credits that is harrowing as she looks out into the darkness with no hope.

Is The Devil’s Rain! a good movie? Well, that depends on your perspective. Despite the flimsy plot, Fuest succeeds at delivering plenty of pure weirdness and gorgeous visuals. And there’s so much talent on the screen — I didn’t even mention that this is one of John Travolta’s first films and that Keenan Wynn (Piranha, Laserblast) shows up as the sheriff.

Plus, like all 70’s occult movies, there are plenty of legends behind the film. Like Ernest Borgnine claiming that there were so many accidents on set, he’d never work on a Satanic film again. Or him saying that the Mafia produced the film and that he was never paid. Cinefantastique magazine even wrote that Fuest had suffered a nervous breakdown during the making of the movie, a fact he disputes on the commentary track. And LaVey claimed that he did a special success ritual for Travolta. 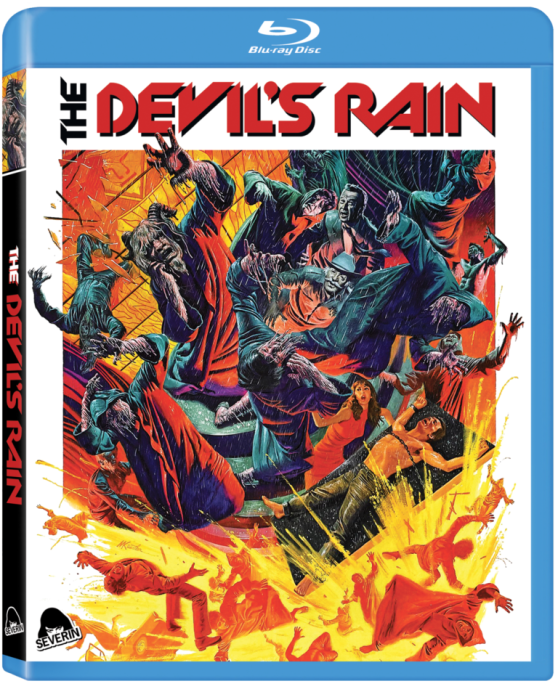 The fine folks at Severin have released several ways to get their new blu-ray of the film, restored in HD for the first time ever, including an extras-packed edition that comes complete with a limited edition slipcase and Corbis pendant. It’s just another example of their taste in films, as well as the loving care they extend to every release.

PS – Here’s the link to a June 1975 Argosy interview with LaVey during the filming of The Devil’s Rain! where he discusses buying the panties of “MGM’s most famous stars- from Greer Garson to Liz Taylor – with the labels still on them,” being minimalized on movie sets and Ernest Borgnine accepting an honorary priesthood.