Originally airing on January 20, 1979, the pilot called Salvage debuted to high ratings — and was brought to us by Harve Bennett, who previously gave us The Six Million Dollar Man. It was an intriguing start to a series. Harry Broderick (Andy Griffith) and his Jettison Scrap and Salvage Co. have a dream, as stated in the show’s opening words: “I want to build a spaceship, go to the moon, salvage all the junk that’s up there, bring it back and sell it.” 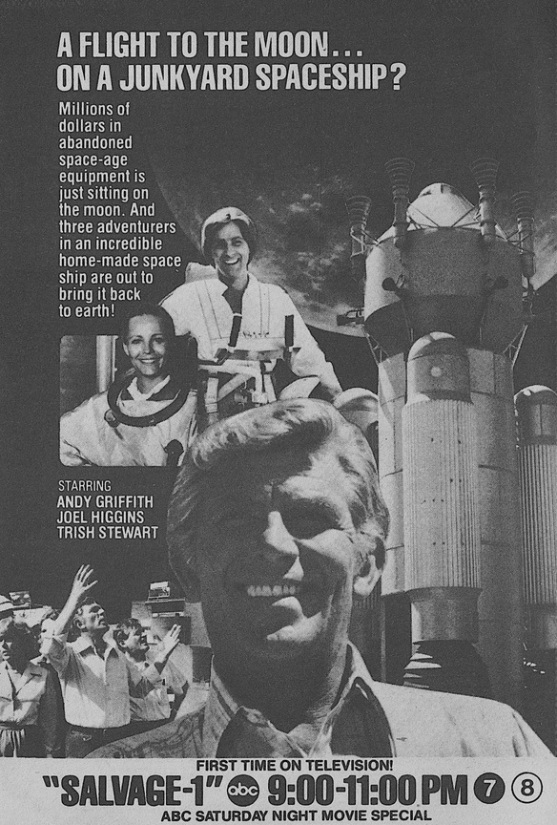 Along with former astronaut Addison “Skip” Carmichael and NASA fuel expert Melanie “Mel” Slozar (who have a past history), they create The Vulture, a spaceship made entirely from reclaimed salvage and powered by monohydrazine (Isaac Asimov was the science consultant for this program).

The TV movie was followed by 15 episodes (20 were produced), with the last 4 shows only running decades later. Despite the initial success, ABC put this show up against WKRP in Cincinnati and Little House on the Prarie. That explains why it died a quick death.

I remember loving the initial TV movie and this was discussed often in our home as a series that had so much potential and was stopped too quickly. Luckily, CBS Late Night would replay the original pilot and the two-part episodes “Golden Orbit” and “Hard Water” as movies. CBS Late Night was an amazing, wonderful way to spend the summer as a kid in the 1970’s and 80’s, as in the pre-digital (and even VCR era) it was the only way to see shows like Kolchak: The Night Stalker, The Avengers, Return of the Saint, Thriller and The Prisoner. That said, a 60-minute show would be stretched out and padded with commercials. But we didn’t have many options back then! 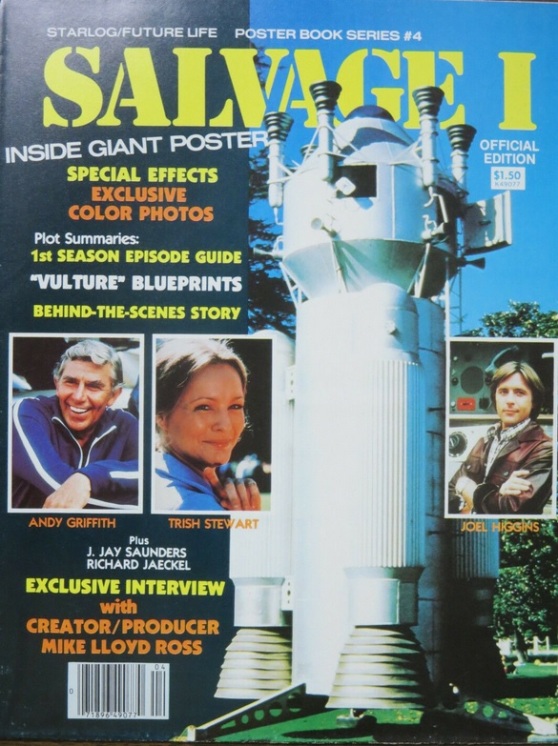 The CBS Late Night movie also played some really incredible films, like The Fearless Vampire Killers, Trog, Frankenstein Must Be Destroyed, The World, The Flesh and the Devil, Dracula Has Risen from the Grave, Frankenstein Created Woman, Dracula, Prince of Darkness, THX 1138, Gargoyles, She Waits, The Bad Seed, Whoever Slew Auntie Roo?, Count Yorga, The Victim, The Abominable Dr. Phibes, Dr. Phibes Rises Again!, The Bat People, Frogs, edited movies of Columbo, Cannon, Kojak, McMillan and Wife and Banacek, Necromancy, Monty Python and the Holy Grail, House of 1,000 Dolls (“quite possibly the sleaziest AIP movie ever made”), The Bird with the Crystal Plumage (!), Rowan and Martin’s The Maltese Bippy, Killdozer, Ruby, Beyond the Door, The Devil’s Rain!, the Dr. Strange TV movie, Mitchell, The Initiation of Sarah, Patrick, Ator: The Fighting Eagle, KISS Meets the Phantom of the Park, The Apple (!), It’s Alive, It Lives Again, Q: The Winged Serpent, Fulci’s The Psychic (!), even supposedly the legendary lost movie The Astrologer (although this list doesn’t have that). These ran on free TV, folks. Where anyone could find them. I’m still just freaked out that this was available, way into the late 1980’s.

Just watch this and try not to be sad that the world is not as perfect as it once was.

If you want to see Salvage 1, you’ll have to rely on YouTube. Or try DVD Rare, which has every episode in one set.