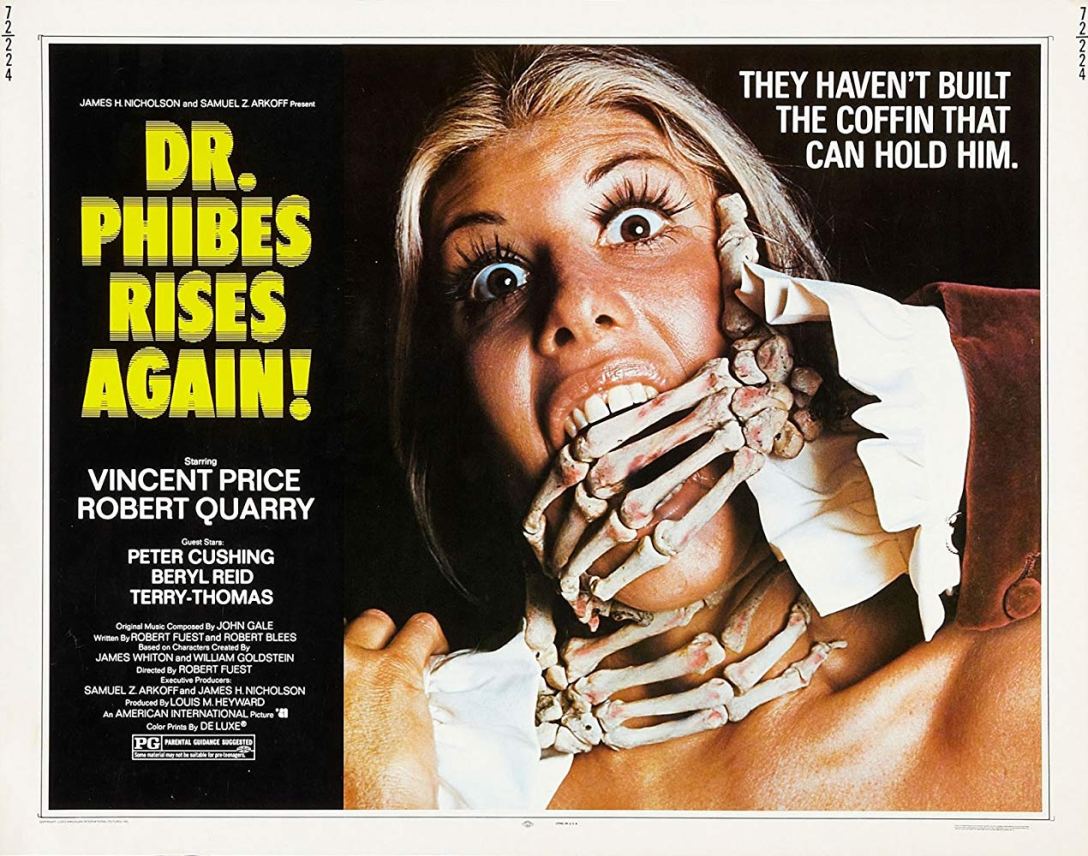 The fact that this movie exists gives me hope. There are moments when life gets me down, when I wonder about my place in this world and if humanity is essentially horrible. Then I remember that great films like this exist and it makes me feel a lot better. You should do the same thing if you’re ever in an existential crisis.

Dr. Phibes is back, three years after he laid down in the darkness next to the corpse of his beloved wife. Now, however, he has learned that the secret of eternal life — held by a centuries-old man — are in Egypt. I don’t care why he’s back. I’d watch Dr. Phibes go grocery shopping!

Dr. Anton Phibes (Vincent Price) has in suspended animation in a sarcophagus alongside his wife Victoria Regina Phibes (Caroline Munro). When the moon aligns with the planets in a way not seen for two millennia, he returns, summoning the silent Vulnavia (thus confirming to me, at least, that she’s really one of his robots as she died in the last film; furthermore, she’s played by Valli Kemp, who took over for the pregnant Virginia North) to his side.

Phibes plans on taking his wife’s body with him to Egypt, where the River of Life promises her resurrection. As he emerges from his tomb, his house has been demolished and the safe that contained the map to the river lies empty. That’s because the map has been stolen by Darius Biederbeck, a man who is hundreds of years old thanks to a special elixir. He may also be every bit Phibes’ equal.

Darius is played by Robert Quarry, who American International Pictures was grooming to be Price’s replacement. There were tensions between the two on set, including a moment where Quarry was singing in his dressing room and challenged Price by saying, “You didn’t know I could sing did you?” Ever the wit, Vincent Price replied, “Well, I knew you couldn’t act.” Quarry would had already played Count Yorga in two films for AIP and would go on to be in The Deathmaster, where he played hippie vampire Khorda, but the AIP style had already fallen out of style. He’s also in tons of Fred Olen Ray films, like Evil Toons where he’s the uncredited voice of the demon.

Biederbeck wants eternal life for himself and his lover Diana (Fiona Lewis, Tintorera…Tiger Shark). Phibes and Vulnavia are on his trail, immediately entering his home, murdering his butler and stealing back the map. Everyone connected with Biederbeck comes to an ill end — Phibes places one inside a giant bottle and throws him overboard. That murder brings Inspector Trout back on the case, as he instantly recognizes that only one man could do something like that.

The rest of the film’s murders are based on Egyptian mythology versus Biblical plagues. Hawks and scorpions become his weapons, along with gusts of wind and bursts of sand. Phibes has also brought an army of clockwork men with him the desert to do his bidding.

Phibes finally exchanges Diana’s life for the key to the River of Life. As he floats the coffin containing his wife down the water, he beckons Vulnavia to join them. As his lover tries to comfort him, Biederbeck begs Phibes to take him with them. He begins to rapidly age and dies as Phibes loudly sings “Over the Rainbow,” which might be the best ending of any movie ever made.

There were plans for a whole bunch more of these films and the fact that they were never made saddens me to this day. I’ve heard that a third film would Phibes fighting Nazis. I’ve also heard that it’d be about the key to Olympus. Or Phibes going up against  Dr. Vesalius’ son. Or Victoria Phibes herself coming back, just as sinister as her husband. There have been titles thrown around like Phibes Resurrectus, The Seven Fates of Dr. Phibes and The Brides of Dr. Phibes. There was even thought of Count Yorga facing off with Dr. Phibes, a fact which delights me to no end.

There was also a pitch for a TV series and what looked like an animated version, with Jack Kirby himself providing the pitch artwork!

Other ideas included Dr. Phibes in the Holy Land, The Son of Dr. Phibes (which would have pitted the doctor and his son against ecological terrorists), Phibes Resurrectus (which would have David Carradine as Phibes battling against Paul Williams, Orson Welles, Roddy McDowall, John Carradine and Donald Pleasence. The mind boggles at the thought, let me tell you!), a 1981 Dr. Phibes film where the WormwooInstitutete would have destroyed his wife’s body and then their strange members, including transvestite twins obsessed with economics and nuclear weaponry, fail to match wits with Phibes) and finally, Phibes was almost a role for Peter Sellers in a Pink Panther film where hed also play Clouseau and Fu Manchu. You can learn more about these at the Vincent Price Exhibit site.

There was also a story in 2013 that Johnny Depp was going to star in a Tim Burton directed remake. That obviously didn’t happen.

So much of this film fits into the same Satanic themes as the original. However, you can add in a few new wrinkles. One of the Eleven Satanic Rules of the Earth states “When walking in open territory, bother no one. If someone bothers you, ask him to stop. If he does not stop, destroy him.” All Phibes wished to do was take his wife to Egypt and bring her back to life. Once Biederbeck stole from him, his fate was sealed.