Producer Sandy Howard (A Man Called Horse, The Neptune Factor — look for that one in oh, a few hours on our site, The Devil’s Rain!, Meteor) had a three-picture deal with RCA-Columbia back in the glorious days of direct to video store movies. Along with Dark Tower (where Freddie Francis (numerous Hammer and Amicus favorites like Trog and Tales from the Crypt) and Ken Widerhorn (Shock Waves, Return of the Living Dead Part II, Eyes of a Stranger) combined forces to become Ken Barnett, directing Michael Moriarty and Jenny Agutter as they battled a haunted high rise) and Nightstick (in which a renegade cop and Leslie Nielsen battle terrorists), he dreamed up a ripoff of Aliens that would take place in a hospital that was called Green Monkey due to the theory that that’s where AIDS came from. Hey — it was 1987.

Helping matters was the 30% Canadian tax benefit, as long as the film was shot in the Great White North with mainly Canadian talent. That means that Saskatchewan native John Vernon is going to show up in most of these films. That’s a welcome thing in my eyes.

Marwellia Harbison is an old woman who loves her plants, but her Micronesian plant is drooping and when handyman Fred Adams inspects it, it pricks his finger. Soon, he collapses and she takes him to Hill Valley Hospital.

Doctors Rachel Carson (perhaps named for the Pittsburgh native whose book Silent Spring advanced the global environmental movement) and Judith Glass see the man and are shocked to discover he already has gangrene.

Ther next patient is the partner of Detective Jim Bishop (Steve Railsback, Helter Skelter, Turkey Shoot), who was shot point blank by criminals.

But back to Fred, who starts shaking and puking up a gigantic insect in pupa form, which they hospital techs put into a bell jar. For some reason, this hospital is also testing military-grade lasers and can analyze monstrous bugs that come out of the stomachs of old men. It’s really all things to all people, a deus ex machine for all seasons.

Marwella and the paramedic who helped Fred now have the same symptoms, and when Fred himself goes into cardiac arrest, the shock paddles cause his chest to explode in a torrent of blood. When the doctors all demand that the hospital be quarantined, hospital director Roger Levering (there’s that John Vernon role we’ve been waiting for!) refuses, as he doesn’t want to cause a panic.

Can things get worse? Of course. Remember that bug in the bell jar? Well, a lab tech is ordered to keep an eye on it, which she instantly forgets when her boyfriend brings the promise of weed and sex in the parking lot. Then, to compound matters, a group of sick kids decides to screw around and pour blue powder all over the beast. That blue powder ends up being some growth hormone, which of course was just lying around the lab. So now, in addition to the virus spreading throughout the hospital, there’s also a gigantic bug killing people left and right.

Can our heroes stop the bug — and the outbreak — before the government enacts the Return of the Living Dead protocol and nukes the hospital from orbit? Well, you’re just going to have to watch for yourself.

Don Lake, who is in six different Christopher Guest movies and is the writing partner of Bonnie Hunt, shows up as an entomologist. And if you’re looking for cameos by people that you know you love, look no further than SCTV alums Robin Duke and Joe Flaherty (Pittsburgh’s own Count Floyd) who are a couple preparing to have a baby in the midst of this insectoid madness. And this is also one of the very first acting roles for Sarah Polley, who would go on to star in the 2004 remake of Dawn of the Dead. She’s one of the kids dumb enough to pour that blue growth powder all over that bug.

Blue Monkey is also known as Insect and Invasion of the Body Suckers, both of which have magnificent VHS box art. 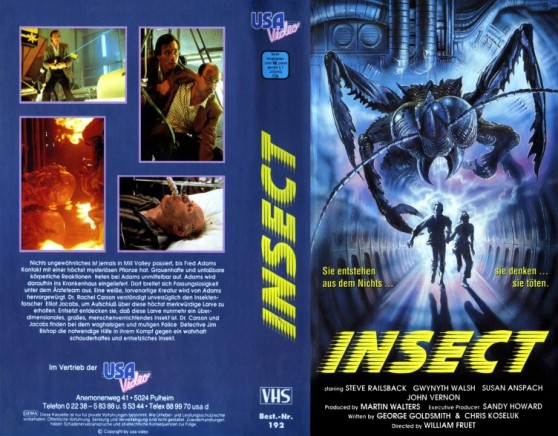 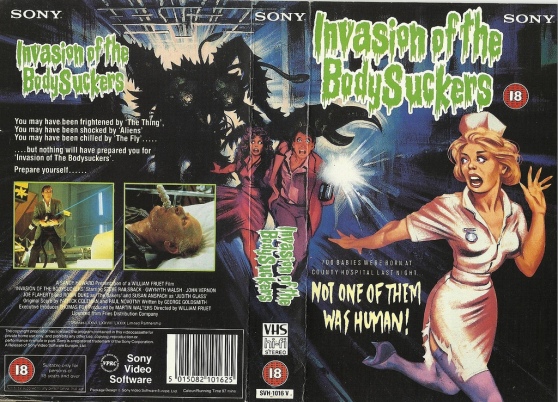 So yeah. Blue Monkey. A movie that hasn’t been rediscovered and re-released as a $50 blu ray by a boutique label yet. Once you could rent it for 99¢, now you’ll pony up the big bucks for it. Until then, you can order it from VHSPS, which is where my copy came from.