Robert Woods may have started his career in Hollywood when he was selected by George Hamilton to be his stand-in for Where the Boys Are, but he made his name in Italy, where he appeared in a ton of westerns like Four Dollars for Vengeance, Savage Guns, The Belle Starr Story (the only Italian western directed by a woman — Lina Wertmüller — and one of the few which stars a woman in the title role — Elsa Martinelli) and this film, which was followed by Pecos Cleans Up.

Pecos Hernandez (Woods) has returned to Houston, looking for Kline (Pier Paolo Capponi, The Cat o’ Nine Tails), the man who wiped out his family. Unlike most films of this genre, the hero is the Mexican and the Texans are the ones who did him wrong. This means that this movie had a huge impact in other countries where Peco was seen as a man fighting imperialism. It’s a good thing they changed the ending, as when the original version where Pecos was killed was shown, the audience pelted the srceen with chairs.

Umberto Raho (The Eerie Midnight Horror Show) plays an undertaker/priest who is anything but religious and one of the more fun characters you’ll find in an Italian western. This is also the first western that George Eastman made and quite possibly where he met Aristide Massaccesi, who was the cinematographer of this before we started to know him as Joe D’Amato amongst many names.

Director Maurizio Lucidi made movies in just about every genre, including giallo (The Designated Victim), peplum (Hercules the Avenger), crime (Stateline Motel, Street People) and comedy (Il marito in collegio). In the 90s and as late as 2003, he was splitting time between TV movies and making adult videos under the name Mark Lander. Writer Adriano Bolzoni’s scripts include The Mercenary, The Man With Icy Eyes, Your Vice Is a Locked Room and Only I Have the Key, The Humanoid and many more. 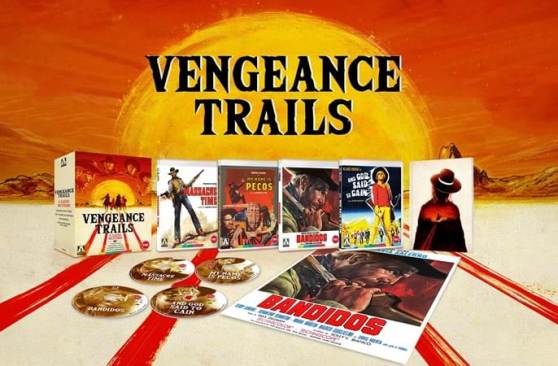 Arrow Video’s Vengeance Trails box set has 2K restorations of this movie, as well as Massacre Time, And God Said to Cain and Bandidos, as well as a collector’s booklet featuring new writing by author and critic Howard Hughes plus a double-sided poster featuring newly commissioned artwork by Gilles Vranckx. My Name is Pecos has new commentary by actor Robert Woods and C. Courtney Joyner, new interviews with actor George Eastman and actress Lucia Modugno, a new documentary featuring a new interview with Fabio Melelli and an archival interview with cinematographer Franco Villa, and the Italian trailer. You can order this from MVD.

It’s also available on the ARROW player. Head over to ARROW to start your 30 day free trial (subscriptions are available for $4.99 monthly or $49.99 yearly). ARROW is available in the US, Canada and the UK on the following Apps/devices: Roku (all Roku sticks, boxes, devices, etc), Apple TV & iOS devices, Android TV and mobile devices , Fire TV (all Amazon Fire TV Sticks, boxes, etc), and on all web browsers at https://www.arrow-player.com.