There are some days when I wake up and don’t want to do anything but watch the films of Cirio Santiago. Seeing as how he produced 64 films and directed 105, so either I need to not do anything like work for awhile or just be content in the fact that I will always have a new film from him to enjoy.

Cirio made a ton of post-apocalyptic films. This is but one of them, all about a gun that can change the balance of power. It’s called — you guessed it — the Equalizer 2000. It’s no Blastfighter, but what is?

Three groups of people — Ownership, the Rebels, and the Mountain People — are battling for the control of the future after the bomb. Slade (Richard Norton, who played himself in Abba: The Movie, which I now must hunt for, and the Prime Imperator in Mad Max: Fury Road) was once one of the Ownership, but when his dad is killed, he goes off on his own. That leads to him making the titular gun along with Karen (Corinne Alphen — yes, she was once Corinne Wahl — the June 1978 and August 1981 Penthouse Pet of the Month and 1982 Pet of the Year; she’s now a professional Tarot card reader). That brings them into conflict with Deke (Robert Patrick!). 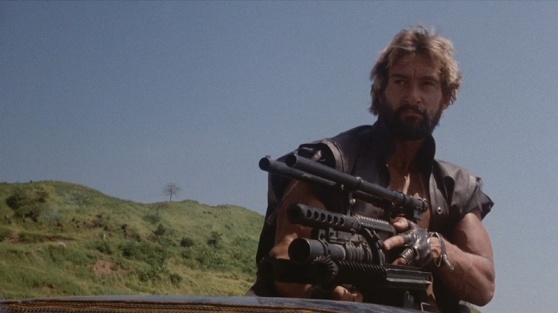 According to the absolutely astounding Internet Movie Firearms Database, the Equalizer is “based on a Colt Model 653 carbine (most likely Colt/Elisco Tools Model 653P, Philippine license-manufactured version), fitted with an M203 grenade launcher, a pair of overhead shotgun barrels and a pair of bottom mounted missile launchers. The launchers doesn’t produce muzzle flash when firing, and the hissing sound is akin to a compressed air blast.”

At the end of the movie, the Equalizer is destroyed and hot, wet manly tears burned down my face. But I wasn’t crying. I just had some radioactive sand in my eyes.

On the Code Red blu eay release of this movie, writer and actor Frederick Bailey says that he was inspired by Anthony Mann’s Winchester 73 as he wrote this film. You can grab that from Kino Lorber or watch this for free on Tubi and Amazon Prime.