You can pish posh this movie by its title or the fact that it rips off A Nightmare on Elm Street or that it’s ridiculous that it has a slasher who has a Warlock guitar with a giant drill at the end. Or you can just do what I did: utterly enjoy every single minute of it. Also, of note, this is the only slasher series to be completely directed by women.

I never saw the original film and I’m here to tell you that I don’t think that matters at all. All you need to know is that Courtney Bates (Crystal Bernard from Wings) survived, teaming with her sister to kill the dreaded Driller Killer (and no, not the one from the Abel Ferrara film.

Now that she’s in high school, Courtney is dealing with nightmares from the ordeal from the first film. She’s also made friends with Amy (Kimberly McArthur, Playboy Playmate January 1982), Sheila (Juliette Cummins from Friday the 13th: A New Beginning, the scummiest of the entire series) and Sally (Heidi Kozak, Friday the 13th Part VII: The New Blood, who noticed during filming that her jean shorts got shorter every day, due to a costumer literally doing that each night, continuity be damned), who have all started an unnamed band (although the songs are performed by the very Go-Go’s-sounding group Wednesday Week).The girls decide to go away for the weekend so they can work on songs, but they end up watching Rock ‘n Roll High School (director Deborah Brock would go on to direct the sequel to that movie) which leads to a pillow fight and Sheila ripping off her bra, because women can make exploitation movies too.

Surprise! Bros Jeff and T.J. sneak up and spy on the girls before busting in and frightening them. The house is a mess as a result. This image sums up everything there is to know about this movie: 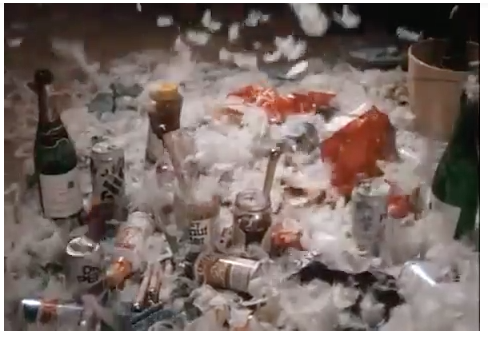 If it seems strange that this movie often focuses on name brand sodas. Mostly Pepsi, but also New York Seltzer. Yet I know that there’s also no way that any of those brands want to be associated with this film.

Later that night, Courtney and Valerie fall asleep in the same bed and our heroine has a dream that the killer murders her friend, then she wakes up in the kitchen floor. Her visions get more and more intense, but the arrival of potential boyfriend Matt makes her happy.

I say that and then within moments, she sees Sally’s zits burst her entire head open. No one can find Sally, so the cops get called. Officers Krueger and Vorhees show up — this is also a film that refers to the last movie’s house as the Cravens and Courtney’s last name is Bates — but assume the teens are all on drugs when Sally shows up alive. Oh yeah — Sally has the last name Burns to pay homage to Sally Hardesty in The Texas Chainsaw Massacre, who was played by Marilyn Burns.

Everyone else goes to town for dinner, leaving Courtney alone with Matt. He surprises her with a cake, like he’s the Jake Ryan to her Samantha Baker, and they start to have sex. Keep in mind that she never blows out the candles and we keep cutting to the cake, blazing away. The killer appears and impales Matt, throwing one of his bloody appendages onto the burning candles. He chases Courtney downstairs right into her friends, who call 911. Of course, the cops blow them off, so they’re on their own against a 1950’s rockabilly greaser with a total 1980’s guitar, trapped in a neon-hued house with Patrick Nagel prints on the walls.

Just as Sally argues with the cops, we see the drill come through the backside of the wall, covered in her blood. Sheila and T.J. get injured and almost get away, but the killer catches them after an angry neighbor (producer Don Daniel as Mr. Damnkids) tells them to get off his driveway and T.J. bites the big drill.

Meanwhile, Courtney, Amy and Jeff try to leave in a car, but the killer drills right through Jeff. The girls run into the house and barricade themselves inside, which means that they don’t come to the aid of Sheila, who gets killed after the killer breaks the fourth wall, saying “Now it’s time for the fun part,” and sings a song called “Let’s Buzz.”

Should every slasher have musical numbers? Nope. But at this point of the movie, I was inclined to follow this wherever it led.

Amy falls to her death as the girls run away through a construction site, while Courtney uses a propane tank to light the killer up. In the morning, the police come and we think it’s all over. No, this movie has more endings than a Tolkien film. First, Amy comes back to life and laughs in the killer’s voice. Then, Courtney wakes up in Matt’s arms, who ends up being the killer. Finally, she is in a mental asylum and the killer’s drill appears near her bed.

Originally called Don’t Let Go, this is probably one of the strangest slashers I’ve seen that doesn’t have Bigfoot kill someone with an oven (Night of the Demon, please stand up). There’s also a scene where a dead and frozen chicken leaps from a refrigerator ala the zombie head in probably Fulci’s only contribution to Zombi 3, then proceeds to leak chocolate sauce/blood all over our protagonist.

Slumber Party Massacre 2 is 77 minutes of your life that you’ll be glad you wasted. From catchy 80’s singalongs to softcore dreams that descend into graphic violence and a killer who owns every scene of the film — and has nothing to do with the first or third movies in this trilogy — this is why I stay up all night and watch movies.

You can get the Shout Factory release at Diabolik DVD or watch it for free with your Amazon Prime membership.

PS – Don’t steal anything from this movie. The notice at the end reads: Any unauthorized exhibition, distribution or copying of this film or any part thereof [including soundtrack] is an infringement of the relevant copyright and will subject the infringer to severe civil and criminal prosecution as well as a midnight call from the Driller-Killer.