After years of hating the franchise, Paramount finally decided to give the Friday the 13th series a higher quality of budget and directors. Hey — it only took six movies! 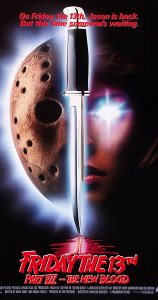 Associate producer Barbara Sachs helped dream up several concepts for this film and according to writer Daryl Haney, “She wanted it to be unlike any other Friday the 13th movie. She wanted it to win an Academy Award.” GQ ran a great article on this film.

Originally intended as a crossover with Freddy Krueger, the logline for this film was, “What if Carrie fought Jason?” What ended up happening was one of Becca’s favorite films in the series.

Directed by John Carl Buechler (Troll, The Dungeonmaster), who also contributed to the special effects, this film establishes the definitive Jason. This is also because it’s the first appearance of Kane Hodder in the role.

Jason is still at the bottom of Crystal Lake, but as Tina Shepard watches her alcoholic father abuse her mother, her mental powers emerge and she drowns her father.

Fast forward and she’s a teenager (Lar Park Lincoln, House II) whose mother (voiceover artist Susan Blu) and Dr. Crews (Terry Kiser, Bernie from Weekend at Bernie’s!) have taken her back to that house to study (exploit) her powers.

Dr. Crews bedside manner is, in a word, the shits. He screams at Tina until her powers start working. She gets upset and runs outside, wishing that she could bring her father back from the dead. The only problem? She brings Jason back instead.

There is also — can you even be surprised at this point — a house of teens throwing a party for Michael (William Butler, 1990s Night of the Living Dead). They include Russell, Sandra (Heidi Kozak, Slumber Party Massacre 2), Kate, Ben, Eddie (Jeff Bennett, the voice of Johnny Bravo), David, Maddy, Robin (Elizabeth Kaitan, who was in the Vice Academy movies), Nick and Melissa.

Tina can foresee that they will all die and Jason lives up to her visions. She’s the Final Girl and has to lose everything, even her mother. As she fights back with her powers, she pulls the mask off his face, revealing it to be decayed and near demonic. Finally, her father rises from the dead and drags Jason back underwater. Yet even after all of that, we can still hear the theme song as someone finds the killer’s mask.

The working title for this film was Birthday Bash, but the original script was even titled Jason’s Destroyer. There were 9 different cuts sent to the MPAA to avoid an X rating, which is still amazing to me. Even more upsetting is that Paramount threw away all of the cut footage, so there’s little to no chance that an uncut version will ever be seen. I still think that the rumored 1989 Dutch release on VHS, which includes all the gore, is an urban legend.

A cool bit of trivia for Friday the 13th fans: the narration in the beginning of the film is by Walt Gorney, who played Crazy Ralph in the first two films.

Kane Hodder really proves why he should be Jason here, as he almost died in a stunt where he fell through the stairs and achieved the record for the longest uninterrupted on-screen controlled burn in Hollywood history at 40 seconds. 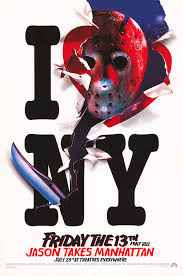 Just like a band that continually says that they are going to retire, this was also intended to be the final film in the series. It takes Jason out of his element and features probably one of the greatest horror movie trailers ever:

It’s just so ridiculous that you have to see the film, you know?

Well, it’s not the last film in the series, but it’s the last one that Paramount would produce until 2009, as New Line Cinema would take over after this. And the working title? Another Bowie song, Ashes to Ashes.

The movie starts with a teenager playing a prank on his girlfriend, dressing like Jason. But the boat they are on reanimates him and he kills them both.

Everyone but McCulloch, Van Deusen, Rennie, Julius, Toby and Sean are killed, so they escape aboard a life raft to New York City, where Jason stalks them in the Big Apple.

This movie is packed with some audience pleasing moments, like J.J. getting killed by her own guitar, Julius’ head getting punched into orbit after trying to outbox Jason, a gang that gets Rennie high and makes her even more freaked out by Jason, her uncle getting killed after it’s revealed that he tried to drown her as a child…oh man, this one is packed with greatness. And then Jason drowns in a sewer. 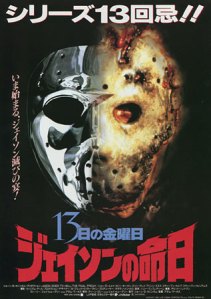 At Camp Crystal Lake, an undercover government agent lures Jason into a trap, blowing him up real good. I saw this scene in a movie theater in Youngstown, OH (former murder capitol of the US!) and the crowd cheered their name being mentioned as a place Jason had been seen.

Soon after, the body is being examined by a coroner who is moved to eat the heart and ingest the spirit of Jason. He goes right back to Crystal Lake and right back to killing him. And now comes the part of the story that no one has ever figured out until now, making the story just like Halloween (again!): Creighton Duke (Steven Williams, Dr. Detroit) is a bounty hunter who learns that only members of Jason’s bloodline can truly kill him. Even worse, if he can possess a member of his family, he’ll become invincible.

The only living relatives of Jason are his half-sister Diana Kimble (Erin Gray!), her daughter Jessica, and Stephanie, the infant daughter of Jessica and Steven Freeman (John D. LeMay, who played Ryan Dallion on the otherwise unrelated Friday the 13th: The Series).

Jessica is now dating tabloid TV reporter Robert Campbell (Steven Culp, Rex Van de Kamp from Desperate Housewives), yet it is Steven that saves her from Jason. He gets blamed for her mother’s death and just Robert is about to take advantage, Jason goes into his body, all with the goal of impregnating his half-sister and making a perfect Jason baby. Oh incest, we were waiting for you to show up.

Meanwhile, Jason wipes out most of the police in town. But then Duke the bounty hunter steals the baby and demands that Jessica meet him at the Vorhees house alone, so that he can give her the mystical dagger that can kill Jason. Now this film has become The Omen.

Despite all this, the heart that is Jason grows into a demonic infant and then crawls into a dead woman’s vagina and is reborn. Yes, you just read that sentence correctly. And man, I said that 5 was the scummiest entry in the series!

It all works out — the dagger releases all of the souls that Jason has accumulated and demonic forces drag him into hell. At the end of the movie, a dog finds Jason’s mask and of all things, Freddy’s gloved hand pulls it into the ground!

Mike McBeardo McPadden wrote about watching this scene on 42nd Street, where the crowd went wilder than any he’d ever experienced and that a man screamed to no one in particular, in the dark, “Freddy wants somebody to play with … IN HELL!!!!” Man, I wish I was there for that. You should also totally grab his Heavy Metal Movies right here at Bazillion Points Books.

Finally, after all these years, Freddy and Jason were set to battle. But guess what? We’d have to wait ten years for it to happen. Because after all, Jason had to go to space first.