At this point, this is the longest that we’ve ever gone without a Friday the 13th film since the break between Jason Goes to Hell and Jason X in 1993 and 2001. But at one point, these movies owned the box office, with one nearly every summer from 1980-1989. Why did people love them so much? And what were they all about? That’s why we’re here. 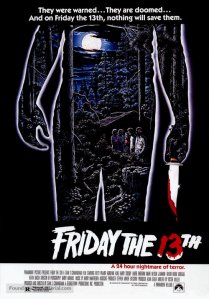 After the success of John Carpenter’s Halloween, every studio wanted a piece of the horror pie, which to this point had been exploitation fodder. Paramount Pictures was first. Sure, critics salvaged the film, but after $40 million in profit, no one really cared.

Produced and directed by Sean S. Cunningham (Last House on the Left), this movie was envisioned as a roller coaster ride. The script came from Victor Miller, a soap opera scribe. And spoilers — but this movie doesn’t even really have Jason in it!

The movie starts in the summer of 1958 at Camp Crystal Lake, where two counselors sneak off and have sex before being killed. This sets up one of the many rules of slasher films: never fuck in the woods.

The camp closes for 21 years, but on Friday, June 13, 1979, that’s all about to change. That said, no one in the town wants it to happen. When Annie Phillips  arrives in town, everyone treats her strangely or acts like Crazy Ralph (Walt Gorney, who shows up in the next film and was the narrorator for Friday the 13th Part VII: The New Blood). She lasts for about five minutes, as she gets killed after her third hitchhike of the day. I’d say this is more of a warning against hitching in the late 1970’s than I would serial killers in the woods.

The other counselors — Jack (Kevin Bacon!), Ned, Bill (Harry Crosby III, son of Bing), Marcie, Alice and Brenda (Laurie Bartram, The House of Seven Corpses) — and owner Steve Christy all show up to get the camp ready. This is where you’ll notice just how different fashion is. Becca and I have seen this live several times in a theater now and everyone laughs as soon as Steve shows up in his short shorts and bandana.

Ned is killed pretty quickly, then Jack is killed with an arrow and Marcie takes an axe to the face. Brenda is murdered as she responds to the voice of a child. Steve gets killed on the way to camp. Before you know it, Alice and Bill are the only ones left, but Bill lasts pretty much seconds. Then we have another future  slasher trope: every body is discovered, hung like trophies.

Now, we have our Final Girl: Alice, who ends up meeting Mrs. Vorhees, who tells the tale of how her son Jason drowned and the horrible counselors who allowed it to happen. Much like the giallo/pre-slasher film Torso, the movie now focuses on the battle between Alice and the real killer. Alice ends up beheading her and sleeping in a canoe. As the police arrive, she has a dream that Jason rises from the water to kill her. This scene wasn’t in the script, but special effects king Tom Savini thought a Carrie-like ending would be more powerful.

Another way that the film pays sort of homage to Italian filmmaking is in the snake scene. It was another Savini idea after an experience he had in his own cabin during filming. The snake in the scene? Totally real, including its on-screen death — someone alert Bruno Mattei!

Some trivia: the film was shot just outside Lou Reed’s farm. The rock star performed for the cast and even hung out with them! Sweet Jason?

To me, the film works because of how great Betsy Palmer is as Jason’s mom. It’s a fine film, but nowhere near the excesses that the series would grow into. This was also the start of critics really hating on slasher films. Gene Siskel was so upset about Betsy Palmer being in the film that he published her address in his column and encouraged people to write her and protest. Of course, he published the wrong address.

Of course, there was going to be a sequel. Sean S. Cunningham refused to direct it because he was against the studio plan to bring Jason back from the dead. He said that it was too stupid and would never work. Hmm.

Beyond a plan to be an anthology of stories on Friday the 13th (which sounds a lot like the plans for Halloween), another thought was that Alice would be a reoccurring hero in this series, continually facing off against Jason again and again in sequel after sequel (again, think Halloween and Laurie Strode). Sadly, after was stalked by a fan, she said she wanted out (she even stayed out of acting for a long time).

That’s why this movie starts with her death. I always wondered why this happens, because it invalidates all of the emotional investment that you put into the last film!

So of course, everyone decides that re-opening Crystal Lake would be a great idea.We’ve got Ginny (Amy Steel, April Fool’s Day), Sandra, Jeff, Scott, Terry, Mark, Vickie and Ted, who sit around a campfire and listen to the legend of Jason. Even Crazy Ralph from the last movie shows up to warn everyone before getting killed.

Here’s my problem with this sequel: it rips a lot off. Jason doesn’t have his trademark hockey mask, so he steals the look of the Phantom of The Town that Dreaded Sundown. And then there’s the issue of taking two murders shot for shot from Mario Bava’s A Bay of Blood. A machete to the face and a couple stabbed together by a spear? Attention director Steve Miner: Bava did it first and better.Miner would go on to direct Halloween H20, so his sins are many.

Just like Shakespeare, everyone dies. Except Ginny. She discovers Jason’s altar to his dead mother and ends up stabbing him in the should with a machete. And then the movie does another shock ending, making you think Jason survived. He, of course, did not. Or he did. You know how these things go.

My question is: Did Jason rise from the dead? Or was he alive in the forest all these years? And how did he learn how to use a telephone? Let’s just stop asking questions.

With Amy Steel uninterested in returning to the series, the filmmakers had to reboot and figure out what made Jason tick. And that ticking was a hockey mask — three movies into the series. The original plan was that Ginny would be confined to a psychiatric hospital and he would track her down, then murder the staff and other patients at the hospital. If this sounds kind of like Halloween 2 to you, well surprise. This is not a movie series known for its originality.

He starts the film killing a store owner and his wife just for clothes. Then, he goes after the friends of Chris Higgins: Debbie (Tracie Savage, who played the younger Lizzie in the awesome made-for-TV movie The Legend of Lizzie Borden), Andy, Shelley, Vera (Catherine Parks, Weekend at Bernie’s), Rick, Chuck and Chili. They run afoul of bikers Ali, Fox and Loco, who follow them back to their vacation home.

Jason starts killing quick, but he’s already mentally scarred Chris, as she survived an attack from him two years ago. This has left her with serious trauma and an inability to enjoy intimacy (which, come to think of it, comes in handy in these movies).

Jason takes the mask from the dead body of prankster Shelley and it’s on, with speargun bolts to the eye, heads chopped in half with machetes, knives through chests, electrocutions, hot pokers impaling stoners and even someone’s skull getting crushed by Jason’s supernaturally powerful hands.

Of course, it ends up with Final Girl Chris against Jason, who she kills by hitting him in the head with an ax before falling asleep on a canoe and having a nightmare of Jason killing her. It’s OK. Don’t worry. We see that all is right in the world and the killer’s body is at the bottom of the lake.

Here’s some trivia: To prevent the film’s plot being leaked (I could tell you the plot in less than a sentence, so this seems like bullshit), the production used the David Bowie song “Crystal Japan” as the title of the movie. They’d use Bowie songs as working titles during several of the other films.

There is a ton of footage that was cut from the film so that it didn’t get an X rating. And there’s an alternate ending where Chris dreams that Jason decapitates her. None of these things make this a better movie.

Whew! We made it through three Friday the 13th movies. Let’s take a little break and then we’ll be back in a bit with three more!