Keep in mind that this article has only run in one place, in a special issue of Drive-In Asylum that was a super limited edition giveaway at a weekend Mahoning Drive-In event. You can’t get it any longer, but you can grab every other issues at their online store! I don’t usually share the artwork that I do for every issue, but seeing as how you can’t buy this one, you get to see it. 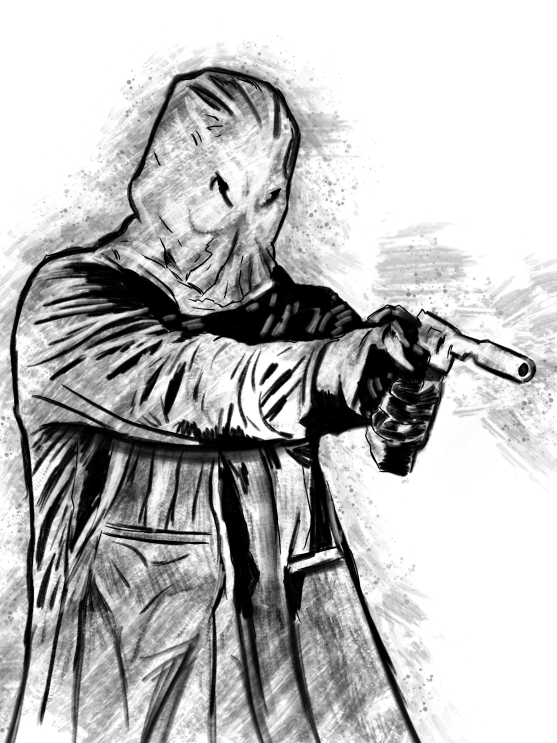 You’re probably sitting in your car, reading through this issue of Drive-In Asylum and getting ready for the show to begin. And there’s a good chance that you may have never seen The Town That Dreaded Sundown before. You’re about to have an experience that you’ll only have once in your life. For this is a film that defies logic and even, at times, narrative sense. But for all its flaws, this movie packs a savage punch. You may be thinking that a film made in 1976 no longer has the power to shock. You’re wrong. Get ready.

Charles B. Pierce – the creator of the opus that’s about to unspool – grew up in Hampton, Arkansas, afraid of the stories of the Phantom Killer who attacked eight people within ten weeks. Five of those victims were killed between February 22, 1946 and May 3, 1946. And the killer was never caught. The filmmaker was looking to follow up The Legend of Boggy Creek while avoiding a sequel. He wanted to stay within his lane – creating inexpensive films set in and targeting the small rural towns of the Southeastern United States. And then he remembered those harrowing tales from his childhood.

What emerged was a film unafraid to go all the way. Just look at the lurid ad campaign, which stated that “in 1946 this man killed five people…today he still lurks the streets of Texarkana, Ark.” This tagline enraged town officials so much that they threatened to sue Pierce, as the wounds of the Phantom Killer’s psychological assault were still fresh thirty years after the actual murders. But this is a film that presents plenty of strange juxtapositions. As upset as the town officials got, the film has closed the Texarkana’s Spring Lake Park Movies in the Park Series every year since 2003.

That sense of duality hit me when I was in your shoes, watching this for the first time, at a drive-in similar to the one you find yourself in. I was confounded by the abrupt shifts in tone that this movie contains. Much like Boggy Creek, it’s constructed as if it were a documentary about the events, but then it quickly shifts in tone to pure horror. And then it makes a complete turn into goofball comedy, often at the expense of the idiotic patrolman A.C. “Spark Plug” Benson (yep, also Charles B. Pierce, as this is an auteur project if you’ve ever seen one).

At first, I hated these scenes of comic relief. But over multiple (and I do mean multiple) rewatches of the film, I’ve come to appreciate them and wonder if Pierce knew that they’d lull the viewer into forgetting that they are watching a film willing to give into its most base notions. Pierce stated that he made this film so violent because the real story wasn’t something he wanted to people to glaze over and forget. Sometimes, there are subtle moments, such as when the camera stays on the Phantom’s face for a full ten seconds as he breathes in and out, staring directly at the viewer. But there are also moments of absolute mania and menace here. The film goes off the rails into unhinged slasher territory years before anyone would codify horror cinema with that subgenre.

After tonight, you may never look at a trombone the same way again (it’s also worth mentioning that in the film’s most gruesome kill, Pierce used his real life girlfriend as the victim). And while so many movies of this era promise a big name cameo in the hopes of gaining an audience, often that big name would step in and out of a scene. Here, Dawn Wells shows up and the squeaky clean Mary Ann from TV’s Gilligan’s Island is treated with anything but kid gloves – more like contempt as she gets brutalized in a scene that had me retroactively concerned for her safety. And in the very next scene, after enduring so much onscreen pain, there’s another screwball comedy scene! It makes you wonder if Pierce was either a genius adept at putting you through a psychological wringer or the most inept pacer ever. Maybe he was both!

This is a movie with no easy answers – just like real life. There were Phantom suspects, but no one was ever caught. And at the end, even when the narrator claims that “Texarkana hasn’t changed much,” the idea that the Phantom is still out there lingers. The presence of the faceless killer lurks in every frame, as cuts to shoes or people listening from the shadows happen frequently. There is no reveal, no solution, no wrap-up. Even at the end, when the crowd gathers to watch The Town That Dreaded Sundown at a Texarkana movie theater – yes, meta was around in 1976, they’re queuing up for the same film you just watched – the Phantom could be anyone in that line. Heck, he could be here right now, at the Mahoning Drive-In, enjoying the fact that his legend simply won’t fade away.

When you get home tonight – successfully evading the Phantom, one hopes – I also recommend the 2014 quasi-sequel to this film, one that examines the very same contradictions – like how can a town that hates this legend still celebrate this film – that I’ve noted before. It doesn’t have any moments where cops crossdress for a silly laugh. But it’s filled with honest dread and is one of the few reimaginings that adds to the richness of the film that inspired it.

Like I said, I’m jealous of you, dear reader. That is – unless you’ve seen this movie before. But even then, I still have a tinge of envy. After all, you’re about to watch a frightening movie under the stars. And if you ask me, that’s the closest thing to heaven you’ll find in this world.