EDITOR’S NOTE: This Lucio Fulci giallo was first on our site all the way back on August 21, 2017. We’re covering it again as its one of eight movies that will be playing at the Drive-In Super Monster-Rama Giallopalooza September 17 and 18.

If you were a well-to-do woman in Italy in the 1970s, chances are — based on the movies that I have seen — that you are about to killed, have killed someone, are having a lesbian affair, are on drugs or all of the above. 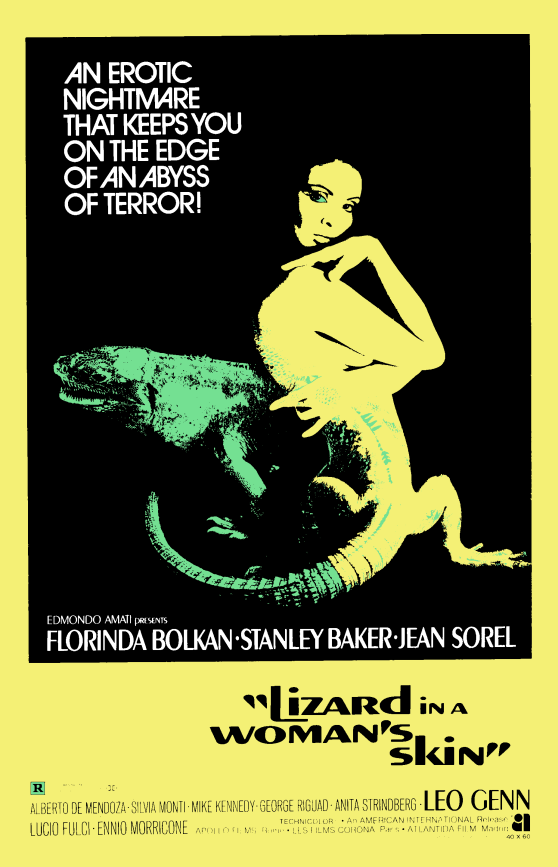 All sorts of rich people shenanigans are going on — Frank is having an affair with his secretary. And Carol may or may not be having a lesbian affair with her neighbor. Her dreams have become so intense, she can’t tell fact from fiction. What worries her the most is that her latest dream ends with her stabbing Julia in vivid Fulci splendor while two hippies watch. That dream turns out to perhaps be true, as Julia is dead and Scotland Yard is on the case. The room and condition of the dead body match Carol’s dream.

The hippies that she remembers from her dream don’t remember seeing her kill Julia. But Carol’s prints are on the murder weapon. As she waits for her trial in a sanitorium, one of the hippies breaks in and chases her. What follows is an infamous scene where she happens upon a room full of vivisected, still alive dogs. It’s a dream sequence unconnected to the rest of the film, but it landed Fulci in prison. Carlo Rambaldi, the amazing special effects artist of E.T., Alien and more, saved the director from a two-year jail sentence by bringing the fake dog props to the courtroom.

Ready for some of those giallo red herrings? Turns out that Julia had discovered Frank’s affair with his secretary and had been blackmailing him. Carol gets released, but upon meeting a hippy woman at Alexandra Palace, she’s attacked, first by bats (this is Fulci, after all) and then by a hippy man who graphically stabs her before the police save her.

Then, stepdaughter Joan meets with the hippy woman witness but ends up with her throat cut. The hippie witnesses admit to stalking Carol and murdering the stepdaughter, but they know nothing of the night that Julia was killed, only recalling “a woman in a lizard’s skin.” At this point, everyone should scream and jump up and down, as the name of the movie has been said in the body of the film.

Another giallo moment — an action that happens off-screen with a main character. Brighton, Carol’s father, has killed himself, leaving a note that he had killed Julia. At his gravesite, the police ask how Carol knew about Julia calling to blackmail the family when it had never been revealed. Turns out Carol and Julia were in bed together when that call was made, but Julia had also threatened to go public with their lesbian affair.

But what about the hippies? Turns out they were so high on LSD, they remembered nothing. Carol decided that if she combined her crazy dreams with images of the murder, she’d get off because of temporary insanity. So wait — her father didn’t kill the girl? Did she kill her father? Why would she be having such crazy dreams about the neighbor if she’d already indulged in the affair?

If you’re confused by a giallo, sometimes I think it’s doing its job. And after all, this film is all about the visuals, as Fulci does a great job with the hippie sequences and throws some split screens in, pre-DePalma. It may drag in parts, but there are also bravura sequences to make up for that fact.

On Friday, September 17, the line-up will be What Have You Done to Solange?, Torso, A Lizard In a Woman’s Skin and The Cat O’Nine Tails. Saturday, September 18 they will present Deep Red, The Bird with the Crystal Plumage, Blood and Black Lace and Your Vice Is a Locked Room and Only I Have the Key.

Admission is $10 per person each night (children 12 and under FREE with adult guardian). Camping on the premises is available each night for an additional $10 a person, and that includes breakfast.