Known in Italy as Non si sevizia un paperino (Don’t Torture Paperino, because Paperino is what they call Donald Duck) and La Longue Nuit de L’Exorcisme (The Long Night of Exorcism) in France,  this was what Fulci considered his best work. It’s a giallo, which if you don’t know, is an Italian movie tradition — kind of like a detective story, but often featuring POV shots from the killer’s perspective, plenty of gore, lots of sex and characters becoming drawn into a series of murders. The Bird with the Crystal Plumage is a good place to start — but this is a fine example, despite missing overt supernatural elements. It’s also the first film where Fulci would let loose with the gore — literal geysers appear in some scenes. 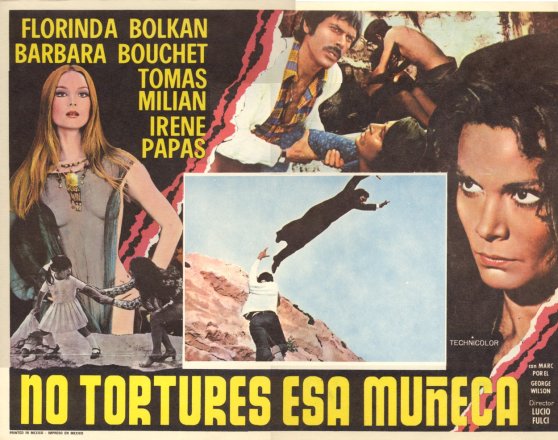 The film was controversial for its day, due to criticizing the Catholic Church, which led to a limited run in Europe and the film being unreleased in the US until 2000.

In the south of Italy, more specifically the small village of Accendura, Bruno, Michele, and Tonino are engaged in mischief and other activities. They do all the things you expect little Italian boys to do — smoke cigarettes, watch prostitutes have sex, abuse a pepping tom — earning the ire of La Magiara (Florinda Bolkan, also the star of Fulci’s giallo A Lizard in a Woman’s Skin), a witch who digs up the bones of an infant before conducting a ritual where she creates voodoo style dolls of the three boys, stabbing them with needles and chanting over them.

Bruno is the first to go missing, inciting a media frenzy as reporters from all over Italy find the story of the week. Andrea Martelli (Dennis Hopper’s The Last Movie, Fulci’s The Four of the Apocalypse) is one of them, but smarter than the rest. Sneaking into the police investigation, he wonders aloud why the kidnappers, who have called in a ransom, have asked for a small ransom. The peeping tom is arrested once it comes out that he buried the boy’s body — but he claims that he only did so to try and get the ransom. While he is held for questioning, the second boy, Tonino, is found dead, proving the innocence of the pervert.

Meanwhile, the final boy, Michele, meets rich girl gone bad Patrizia, (Barbara Bouchet from The Red Queen Kills Seven Times) who sunbathes in the nude and has no problem letting the young kid watch. Someone calls Michele during a rainstorm the next evening and he becomes the third victim.

This gives the reporter the chance to meet and get close to Patrizia. Turns out she’s hiding out in her rich father’s modern house after a drug scandal — MARIJUANA!!! — and the villages have already condemned her as a slut due to how she dresses. The reporter also meets the young village priest, Don Alberto Avallone, who lives with his strange mother and deaf, dumb and mentally deficient little sister.

Don Alberto is deeply affected by the boys’ deaths, as they were all pupils at his school and he attempted to keep them off the streets and playing soccer. He’s so well connected — both in town and with the Catholic Church — that he censors even the magazines on the newsstand. He remarks that he wishes that he could censor Patrizia.

That means it’s time to meet someone new — Francesco, an old man who lives in a cave, practices black magic and considers Magiara as his student. He refuses to cooperate with the police, so they hunt Magiara down and interrogate her. She begins to convulse, scream and froth at the mouth, happily admitting that she killed the boys because they disturbed her son’s grave. And oh yeah — that child was the son of the devil.

Even though she was nowhere near the murder scene, the villagers are convinced that she’s the killer. The police can do nothing but release her — a release that leads to her doom, as a walk through a cemetery leads to her being beaten with chains by a gang of men (several of the grieving fathers are in their number). This is where Fulci lets loose with the gore — each hit brings shards of flesh and bone and blood to the fore, ending with Magiara crawling up a cliff, begging for help as cars just pass her by.

To the shock of the villagers, the murders don’t stop. But at the latest one, Martelli has found a Donald Duck head. This makes Patrizia realize — she bought that doll for Don Albeto’s sister, after she found her walking with another headless doll.

Their theory — that the little girl is imitating her mother by pulling the heads off the dolls — is a decent one. But they’re wrong — it’s really the priest who was behind it all, killing the young boys so they can go to Heaven with clean souls. After a brutal fistfight, the priest loses his balance and falls to the rocks below. This scene would be awesome with modern effects work, but instead, Fulci must rely on a mannequin looking body — a sad sight as it’s in full close up numerous times as the body bounces off rocks and emits showers of blood.

Becca and I had the good fortune of seeing this film on the big screen at The Hollywood Theater — surrounded by around ten other people all wearing t-shirts emblazoned with their Italian horror film favorite (I demurred, not wanted to be that guy, and chose a Phantom of the Paradise design).  I wouldn’t say it’s a fun film — no film stuffed with drowned and decimated children can be — but it’s well worth watching. There’s also a new Arrow Video deluxe edition that has recently come out, so you shouldn’t have to look all that hard for this movie. It’s worth it — provided that you’re not offended all that easily by attacks on church and state.

UPDATE: You can watch this for free on Amazon Prime and Shudder.