Based on the novel Airport by Arthur Hailey (whose novel Flight into Danger was adapted into Zero Hour! (as well as a later TV movie using the original title) which was later remade as Airplane!, which is also a parody of these films, but more about that later), these four films go from class to cash-in. And the worse they get, the more I love them.

The only constant throughout the series is Joseph Patroni, played by George Kennedy. His career improbably goes from a chief mechanic with a license to taxi planes to vice president of operations to consultant to pilot, surely a lateral and perhaps even regressive career path.

Despite having a big budget and high pedigree cast, Burt Lancaster, who starred in the original, claimed that the film was “the biggest piece of junk ever made.” He should have waited a few movies in to say that!

George Seaton (Miracle on 34th Street) directed the initial installment, which originated the entire big budget disaster genre that ruled the 1970’s. The actual story is simple — there’s a big snowstorm in Chicago and a flight to Rome is in danger, thanks to a down on his luck demolition expert (Van Heflin in his last role) looking to blow up the plane so that his wife (Maureen Stapleton, who won a Golden Globe for her work) can cash in. Along the way, we meet airport manager Mel Bakersfield (Burt Lancaster), whose is married to the airport over his wife (Dana Wynter from Invasion of the Body Snatchers) while a co-worker (Jean Seberg, the gorgeous star of the original Breathless whose support of the Black Panthers led to the FBI COINTELPRO hounding her for the rest of her short life) pines for him. Then there’s Vernon Demerest (Dean Martin), who is married to Bakersfield’s sister (Barbara Hale, mother of William Katt) but is having an affair with a stewardess (Jacqueline Bisset, The Mephisto Waltz). Then there’s Mrs. Quonsett (Helen Hayes, who won an Oscar for the role), an elderly woman who sneaks her way onto planes.

This big cast all interplays with one another, ending up on the seemingly doomed flight or aiding in its rescue. Will love win out? Will anyone who works in the airline industry get along with their spouses? Can Patroni shovel out a plane in time after being called in while he’s trying to enjoy a night of passion with his wife? Sure. Yes. Of course.

To get big stars like Burt Lancaster and Dean Martin, the producers gave that 10% of the profits after the film reached $50 million. With a US gross of over $100 million, the stars did more than fine making this one.

A small airplane crashes into a 747, taking out nearly the entire crew of flight 409, and only the stewardess can land the plane! Such is the plot of Airplane 1975, but that thin story doesn’t matter. You’re coming here for starpower and you’re gonna get it, baby!

Charlton Heston (the undisputed 1960’s and 1970’s king of the post-apocalyptic film, between Planet of the Apes, Soylent Green and The Omega Man) is Captain Alan Murdock and he’s the only person who can save the day, with heroics that include being dropped into a plane that’s actually in flight! Karen Black (Trilogy of Terror, Burnt Offerings) is his girlfriend and the air hostess charged with keeping the plane aloft.

The doomed flight crew is played by Efram Zimbalist, Jr., Roy Thinnes from TV’s The Invaders and Erik Estrada. It’s shocking just how sexist they are with the rest of the in-flight crew and even more shocking just how much the ladies like it. The 1970’s were a doomed time when women just had to take the sexual harassment and like it, or return it back in kind.

Then there’s Gloria Swanson playing herself (Greta Garbo was the original plan) with Linda Harrison from Planet of the Apes as her assistant. Strangely, Harrison renamed herself Augusta Summerland for this movie.

And then there’s Myrna Loy as an alcoholic actress in the role originally meant for Joan Crawford! Three drunk guys (Jerry Stiller, Norman Fell and Conrad Janis) who would go on to be dads in sitcoms! Sid Caesar as a guy who can’t keep his fucking mouth shut! Linda Blair as a sick girl who just wants to listen to Helen Reddy perform as a singing nun! And Patroni’s wife (Susan Clark from TV’s Webster, who was spotted by the eagle eyed Becca) and son are on the flight, too!

Airport 1975 is big, bombastic and stupid. And it’s also awesome. It’s pure escapism and is devoted to entertaining you. It’s also a film packed with men patronizing women, calling them honey and yelling at them when they can’t get their shit together. 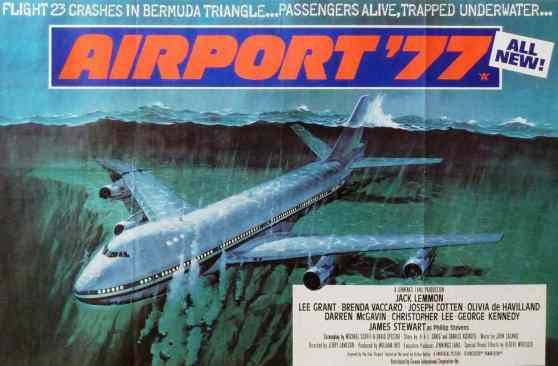 Jerry Jameson, the director of The Bat People, is in the director’s chair for the third installment of the franchise, which takes a turn into the fantastic. A private 747, filled with the rich and powerful, is hijacked and crashes into the Bermuda Triangle where it slowly fills with water.

This one boasts Jack Lemmon in the lead as Captain Don Gallagher and he pals around with Darren McGavin as they work to save everyone. Lee Grant and Christopher Lee (!) play a bickering married couple. Joseph Cotten appears, leading me to wonder when Dr. Phibes will strike. TV’s Buck Rogers, Gil Gerard, shows up. And hey look, there are Jimmy Stweart and Olivia de Havilland (replacing Joan Crawford yet again, just as she did in Hush…Hush, Sweet Charlotte and Lady in a Cage). And I bet Bill from Groovy Doom would never forgive me if I didn’t mention that Michael Pataki appears, too.

This one is…well, it’s certainly a lot more ridiculous than the previous entries. And if you think the next one is going to be better, have I got some news for you!

A few minutes into this movie, Becca turned to me and said, “There isn’t anyone good in this one like the others.” I disagreed. This film is filled with some of my favorite people and while it’s the worst film in the series, it’s also my favorite. If they ever make a blu ray of it, I demand to do a commentary track for it!

Directed by David Lowell Rich (Satan’s School for Girls, Eye of the Cat), this film is quite relevant today, as it’s rife with corrupt corporations, drone planes and media scandals. You’ve got Robert Wagner playing a corrupt arms dealer who is in love with Susan Blakely, yet he keeps trying to kill her.

For the ladies, there’s Alain Delon as the dashing captain. And for the men, there’s Sylvia Kristel as the gorgeous airline hostess. And for the fans of The Omen, there’s David Warner as a henpecked flight officer.

There may never be a movie as sexist as this one. Just look at the way the character of Patroni has changed. He’s no longer a ground crew guy who will kick a pilot out of his own plane. Now, he’s flying the plane while making sexist jokes at every opportunity To wit:

Isabelle: You pilots are such… men.

Capt. Joe Patroni: They don’t call it the cockpit for nothing, honey.

Or when he asks Delon’s character about Vietnam:

Capt. Joe Patroni: Gee, I remember this Eurasian gal. She had these great big blue eyes. They called her the tarantula. You ever run into her?

Capt. Paul Metrand: No, I don’t think so.

Capt. Joe Patroni: You’d remember if you did. She was a real ball breaker!

That makes me wonder — how was Patroni in Vietnam? Wasn’t he already working in the Chicago airport back in the original? Well, now his wife is dead, his son is in college and he’s ready to party. In fact, when they get to Paris, he gets set up with a prostitute and has the night of his life. Is he mad when the ruse is revealed? Hell no! It makes him overjoyed as he slaps his pal’s back!

What is happening with this film? I literally yelled at loud several times during it, shocked at how raw it seems in the world of political correctness. But this isn’t Blazing Saddles, a film that uses non-PC language for comic effect. This is a scummy cash-in, the final film of a once high prestige franchise. And I loved every minute of this strange bird!

Martha Raye gets locked in a bathroom as a plane faces turbulence! Jimmie “Dynomite” Walker smokes up and carries his saxophone everywhere! Cicely Tyson just wants to get her son a new heart! John Davidson performs his own marriage ceremony to a Russian gymnast! Mercedes McCambridge, the voice of Pazuzu, is in this! And oh shit, Charo is in the credits and has around thirty seconds of screen time, thirty seconds which had me screaming in pure joy!

Have you realized yet how much I adore this movie? How can you not love a film where a heat sinking missile is defeated by rolling down the window of a supersonic airplane and shooting a flare gun out the window? And after the plane went through such chaos between New York and Paris, why would anyone allow it to fly again the next day? Why wouldn’t security be increased? And why not crash land the Concorde in the alps? Why would they even get on the plane in the first place?

Even better, there’s a news report earlier in the film that sounds like it came straight out of The Simpsons, a strange piece of comedy in a film that has been serious so far. That’s because that voice belongs to Harry Shearer!

Obviously, we wouldn’t have Airplane! without these films. But after watching the last two films, it’s pretty hard to parody what has become a parody.

I lucked into finding the Airport Terminal Pack, a collection of all four films, for just $6. It’s literally the best purchase I’ve ever made in my life. If anyone reading this ever wants to come over and have me scream and yell through any of these films — please pick the last one — consider this a standing offer!

14 thoughts on “WATCH THE SERIES: Airport”