Matt Cimber has pretty much lived a life — he was married to Jayne Mansfield, he created the Gorgeous Ladies of Wrestling and he directed movies like Butterfly, The Witch Who Came from the Sea and Hundra amongst others. And in 1973, he was able to convince six currently playing NFL stars to appear in a black version of the biker film. The results? Amazing.

The Black Six is made up of six All-Pro NFL stars:

Washington already had some acting experience, so he stars as Bubba Daniels, a Vietnam War vet who returns home to find that his brother has been killed by a white supremacist biker gang. Their leader, Thor, is played by Ben Davidson, an avid real-life biker who played for the Oakland Raiders. You can also see him in M*A*S*H*, Conan the Barbarian and as Porter the Bouncer in Behind the Green Door.

Bubba and his gang — the Black Six — decide to avenge that death, which leads to battles with racist townies, uncaring police and Thor’s gang. The final battle ends with Thor blowing up his own bike to kill them all or so it would seem. According to Mercury Morris’ book Against the Grain, the players protested that ending — guess they didn’t realize that nearly every biker movie ends with the heroes getting killed — so that’s why the movie ends with the title card that says “Honky, look out…Hassle a brother, and the Black 6 will return!”

It’s all pretty depressing stuff, to be honest. But you can say that for nearly all biker and blaxploitation cinema. It’s still amazing to be that at one point, the NFL didn’t have the control that it does today and that six of its biggest stars could go off and make a movie together. 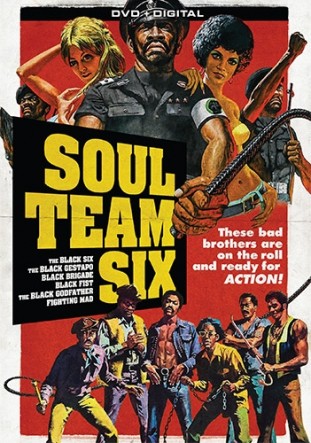 You can get The Black Six on Mill Creek’s new Soul Team Six DVD collection, along with five other films.

DISCLAIMER: Mill Creek sent us this set, but we were planning on buying it anyway. It has no bearing on this review.