EDITOR’S NOTE: This 21st Century Film Corporation release was originally on the site on October 31, 2021.

Oh man, where do I even begin in trying to make sense of this movie?

It’s not a sequel to Demons, no matter what its alternate title Demons 6 De Profundis promises to you.

It was called Edgar Allan Poe’s The Black Cat in America, when it most assuredly has nothing to do with that film. 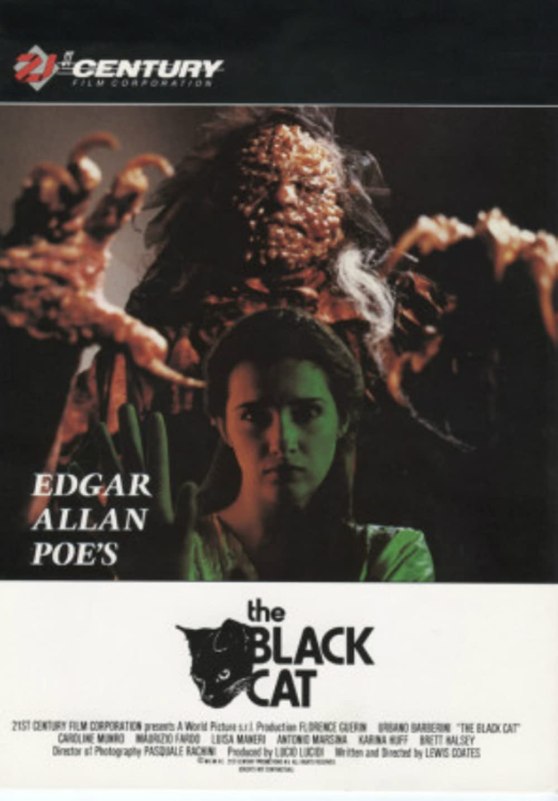 And somehow, it was nearly called De Profundis (From The Deep) and is also sometimes referred to as Demons 6: Armageddon, which makes sense because it’s filled with scenes of space and planets randomly throughout the movie.

It’s also — sit down for this one — an unofficial sequel to Suspiria and Inferno, made back when Argento hadn’t yet decided to close off that cycle of movies with Mother of Tears. Yes, the script to this movie was adapted from Daria Nicolodi’s (Argento’s ex-wife and creator of The Three Mothers trilogy) script for what was going to be an official Argento Three Mothers film that never saw the light of day. And who better than Luigi Cozzi — who in addition to making Starcrash and the Ferrigno Hercules films, runs Argento’s store Profondo Rosso store — to direct this?

Are you confused yet? I am and I haven’t even started watching the movie yet!

This one is all about Marc (Urbano Barberini, who was actually in Demons), a horror film director, is making a movie called Suspiria De Profundis that is a sequel to Suspiria and based on Thomas De Quincey’s story Levana and Our Ladies of Sorrow. There’s even a sequence where the characters discuss just how good of a director Argento is as they reveal what the Mother of Madness looks like, dripping with worms and gore.

Marc casts his actress wife, Anne (Florence Guerin, Too Beautiful to Die) in the lead, along with Nora (Caroline Munro, who I should not have to tell you anything about other than the fact that her being in this movie makes me overjoyed). Things seem to go pretty well for all involved until Levana, who it turns out is a real person, objects to how she’s portrayed in the movie and goes wild, blowing up food in refrigerators and people’s chests.

Levana — the Mother of Tears — may be the lead villain, but there’s also an evil film producer in a wheelchair named Leonard Levin (Brett Halsey, Demonia, The Devil’s Honey) who hints at wanting to take Marc’s soul. And Nora has designs on Marc, so there’s that. Also — a refrigerator that sprays food everywhere and Michele Soavi in a cameo as a director.

This movie is also packed with mid-80s hair metal, featuring Bang Tango and White Lion all over the soundtrack.

Charitably, this movie is a mess, but I completely loved every single minute of it. There’s enough bile and blood and breasts and beasts to satisfy just about any horror movie lover. I’m in for Demons 7 if these guys want to make it.

If you want the details on all the different versions of Demons, we have you covered right here.

UPDATE: Get this from Severin.