EDITOR’S NOTE: This review originally ran on October 30, 2019. Now it’s back for our celebration of Norman J. Warren. 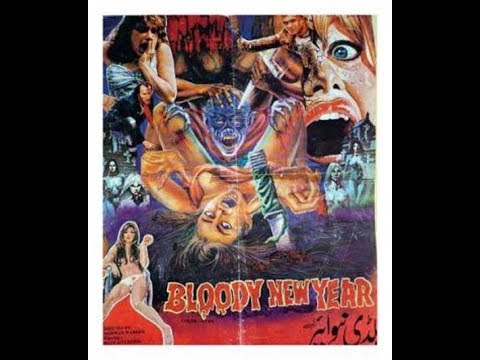 Also known as Time Warp Terror, this movie was inspired by 1950’s horror films. On this island where the kids get trapped, it’s always 1959. It also has the band Cry No More all over it, lending it the perfect bit of 1980’s cheese that you may be looking for. Imagine The Beyond, but for kids. That’s pretty much what this is.

The final feature film directed by legendary British horror filmmaker Norman J. Warren (a long-time resident of the video nasty list), Bloody New Year is about a bunch of kids named Rick, Janet, Lesley, Spud and Tom, who save American tourist Carol from the bouncers and a ride operator of an amusement park. They end up stealing a boat and making their way to an island which has The Grand Island Hotel, a place where its always been New Year’s Eve 1959.

There’s even a movie theater that’s showing Fiend Without a Face, which plays before Spud gets offed. Actually, just like Shakespeare, everyone dies, becomes a zombie and all end up back at the New Year’s Eve party. Such is life and death in the resort areas of the U.K., I guess.

You can get this from Vinegar Syndrome.