Fright Night was the first modern horror film I ever watched. I remember painting in my parent’s kitchen and my father telling me not to be afraid and just watch it with him. It’s a great start — combining the Hammer films that I loved that didn’t scare me with new school special effects and metacommentary. 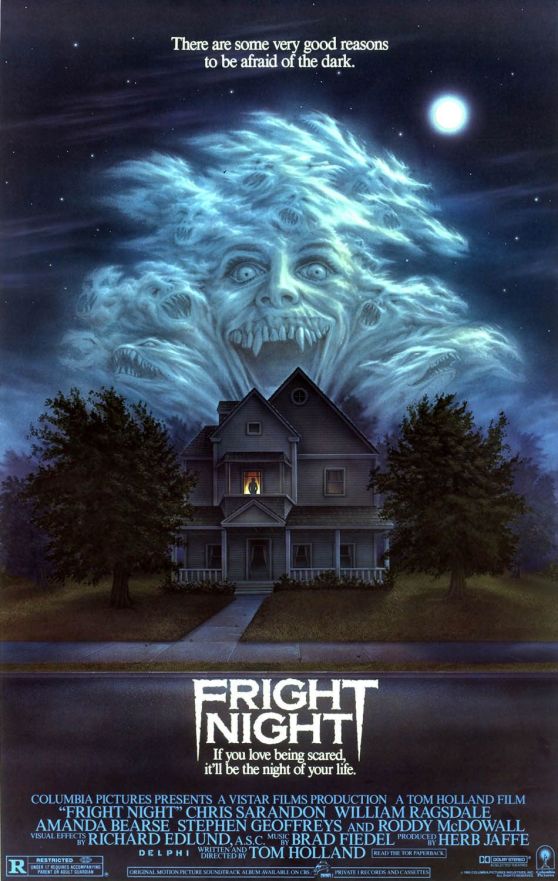 The very first film in the series, this one really speaks to me as I was part of the last generation to grow up with horror movie hosts on UHF channels. Sure, there’s Svengoolie today and some internet shows, but it’s not the same. Peter Vincent (Roddy McDowall) is one such host, a washed-up actor who was in a few great movies decades ago and now goes from town to town, playing the same old 1960’s Z list horror films, saying the same lines.

The defining moment for him is that Charley Brewster (William Ragsdale, Mannequin 2: Mannequin on the Move) believes in all his bull. And when Jerry Dandrige (the untrustable Chris Sarandon) moves in next door and shows all the signs of being a vampire, Charley finds he needs Peter Vincent more than ever before.

Plus, you get a pre-Married with Children Amanda Bearse as Charley’s love interest and a pre-gay pornography/976-EVIL Stephen Geoffreys as Charley’s best friend/worst nemesis Evil Ed. And I just love Billy Cole (Jonathan Stark, House II) as Jerry’s thrall.

This is a movie made for those who love horror movies. After all, Peter Vincent is named after horror icons Peter Cushing and Vincent Price. Creator Tom Holland wrote the part for Price, but the acting great had stopped appearing in horror movies at this time in his career. As they made the film — and the sequel together — Holland and McDowall became life-long friends, with McDowall introducing the young director to Price, who was flattered that the part was written to honor him and thought that Fright Night “was wonderful and he thought Roddy did a wonderful job.”

He’s right — this is a movie that taps into the mind and heart of horror fans, as so many of us have wondered, “What if the monster — and the monster hunter — was real?” The lighthearted yet dangerous tone of the film is letter perfect. That scene in the nightclub, where Jerry takes on the security guard? As good as it gets.

Want to watch it now? You can catch it streaming on Hulu.

Also of note: I’m glad the original ending wasn’t used. It was to close with Charley and Amy making out with Peter Vincent coming on the TV to host Fright Night, saying “Tonight’s creepy crawler is Dracula Strikes Again. Obviously about vampires. You know what vampires look like, don’t you? They look like this!” Then, he would transform, look into the camera and say, “Hello, Charley.”

After the unexpected critical and financial success of this film, a sequel was inevitable. Holland and Sarandon were both making the first Child’s Play, so they couldn’t commit to the film, although the actor did visit the set. Stephen Geoffrey’s didn’t like the script, opting to star in 976-EVIL. Ultimately only Ragsdale and McDowall would return. 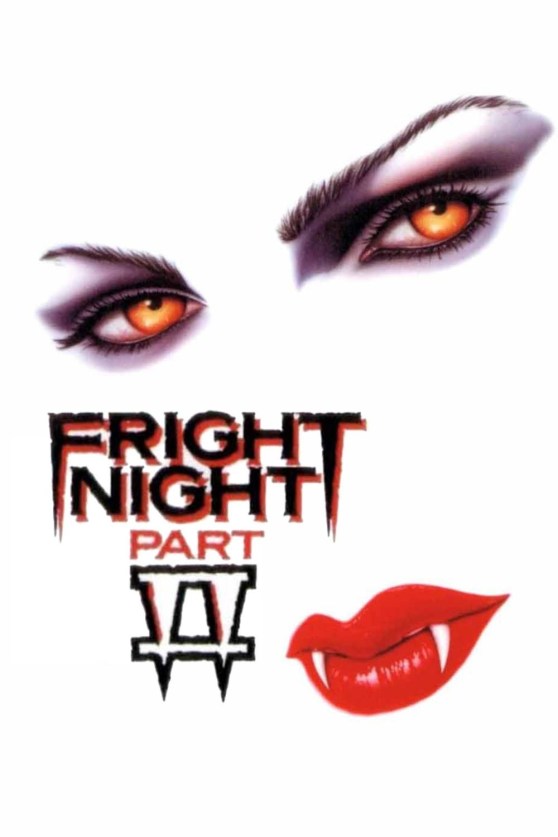 Three years and plenty of therapy later, Charley Brewster now believes that Jerry Dandrige was a serial killer and that vampires don’t exist. Now a college student with a new girlfriend, Alex Young (Traci Lind, who dated Dodi Fayed before Princess Diana), Charley sadly discovers that Peter Vincent is back to hosting Fright Night. As they leave Peter’s apartment, a new nemesis, Regine steals Charley’s attention. There’s even a new version of Evil Ed, a vampire named Louie (Jon Gries, who is great in everything he’s done from Joysticks and Real Genius to The Monster Squad and TerrorVision) who is making Charley and Alex’s lives hell.

It turns out that she’s Jerry Dandrige’s brother and here for revenge. Now, the tables are turned and Peter Vincent is the one who has to convince Charley that vampires are real. Even worse, she’s turning Charley into a vampire and has stolen the Fright Night hosting job away from Peter! There’s also a transgender rollerskating vampire, putting this movie years ahead of others in presenting LGBT roles (even if Belle is evil).

One small trivia note: the vampire form that Regine transforms into at the end was modeled after 45 Grave lead singer Dinah Cancer. If you don’t know her band, they sang the song “Partytime” from TThe Return of the Living Dead.

There’s no way that this movie could live up to the original, but it tries. It hasn’t really been seen much, as LIVE Entertainment barely released it on home video. Artisan Entertainment released it on DVD in 2003, but it’s been out of print for a long time and commands big bucks. You can often find a bootleg of the high definition TV edition of the film at conventions (that’s where we got it!).

Written by Holland and directed by Tommy Lee Wallace (Halloween III: Season of the Witch and the original It, as well as the writer of Amityville II: The Possession, a movie I never cease trying to get people to watch), this movie suffered at the hands of a very real tragedy.

McDowall loved playing Peter Vincent and was eager to bring Holland back to make a third film, so he set up a meeting with the two of them and Carolco Pictures chairman Jose Menendez. Legend has it that the meeting did not go well. Later that night, Menendez and his wife were infamously murdered by their sons, Lyle and Erik. When McDowall learned of the news, he called Wallace and said “Well, I didn’t do it. Did you?” 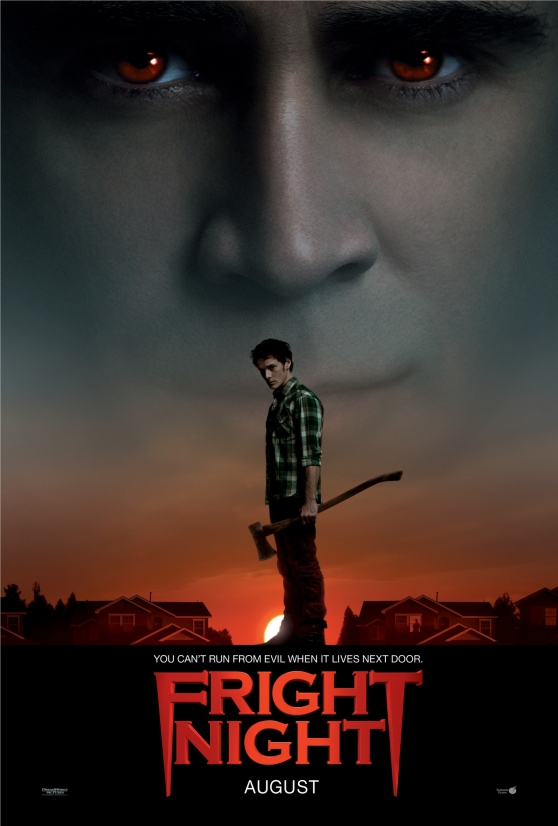 If you thought Hollywood was done with Fright Night, you’re wrong.

Colin Farrell plays Jerry here as “the shark from Jaws.” Christopher Mintz-Plasse plays Evil Ed as a geeky kid who was once best friends with Charley, who is now one of the popular high schools (remind me to tell you about the child vampire that used to chase me through my grandparent’s backyard someday). And former Dr. Who David Tennant is more Criss Angel than Zacherley.

This is a film that I really tried to get past and enjoy, but I just couldn’t be entertained by it. I’m not the only one. Tom Holland said, “Kudos to them on every level for their professionalism, but they forgot the humor and the heart. They should have called it something other than Fright Night, because it had no more than a passing resemblance to the original. What they did to Jerry Dandrige and Peter Vincent was criminal. Outside of that, it was wonderful.”

That said, there is a nice moment where Chris Sarandon makes a cameo as a victim of the new Jerry. Otherwise, this one is mean-spirited where it should have heart. No part of it feels fun. I was shocked to learn that it was directed by the same person who made I, Tonya and Lars and the Real Girl, Craig Gillespie.

And if you think that one is bad… 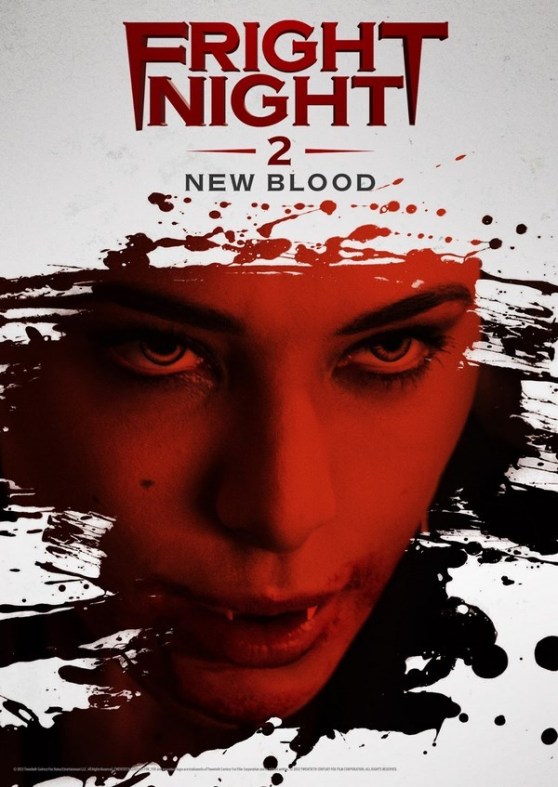 This direct-to-video sequel completely ignores the first remake, instead being a simultaneous remake of the first two films. The Gerri Dandridge in this one is a Romanian history and culture professor who teaches Charley, Evil Ed and Amy when they take a class trip to Romania. And this Peter Vincent hosts a reality show where he hunts vampires.

For some reason, Fox greenlit the movie and rushed it into being at a record pace. The first draft was written in a week and it was finished in 23 days. If only it didn’t feel like it went on for 24. This movie is a complete waste of time and the name of this franchise. It was like they heard someone say, “Nobody can make a worse remake than the last Fright Night.” And replied, “Hold my cup of blood and apple.”

Here are some other spinoffs: 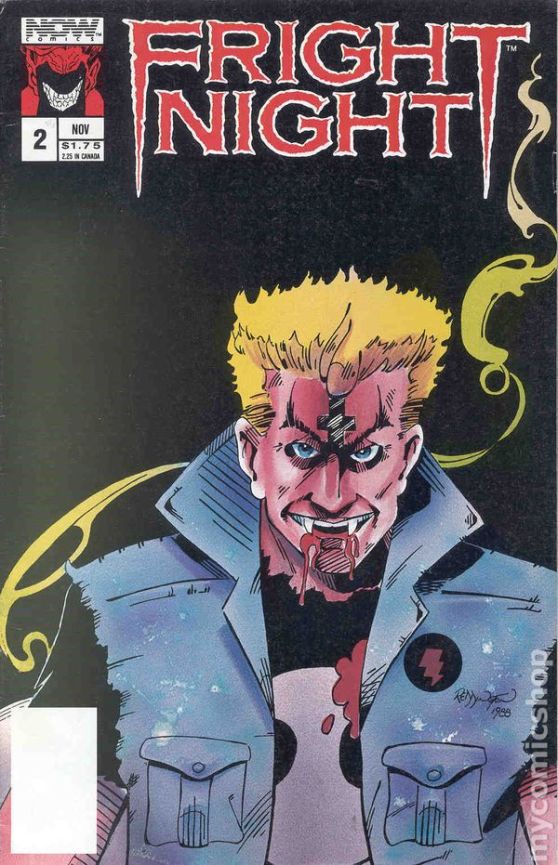 NOW Comics released 27 total issues of a Fright Night comic that adapted both movies, as well as starting new stories where Peter and Charley battled a spider boy, squid people, aliens, a minotaur and the Legion of the Endless Night, which eventually brings back Jerry Dandrige to begin a new army of the undead peopled by French prostitutes!

Terror Time put out a new Fright Night comic book this year, Fright Night: The Peter Vincent Chronicles, which explains what happened to Peter between the first two original films. You can grab it — and the Fright Night coloring book and the screenplay too — right here.

In 1988, an Amiga video game was released. Strangely enough, you play as Jerry, trying to make it through your home and transform people into vampires. Everyone from the original Fright Night appears in the game as enemies and potential victims except Billy Cole.

And in 1989, the Indian film Kalpana House was released. It’s a loose remake, with Peter Vincent’s character being a priest and plenty of musical numbers. Yep. Really.

Finally, there’s the exhaustive 3 hour and 37-minute documentary You’re So Cool, Brewster! The Story of Fright Night. In addition to pretty much everything you’d ever want to know about the original two films, the filmmakers also created a series of trailers for the fictional movies The Resurrection of Dracula, Psychedelic Death, I Rip Your Jugular and Werewolf of Moldavia, which starred Peter Vincent (Simon Bamford, Ohnaka from Nightbreed and the Butterball Cenobite from the first two Hellraiser films) and Christopher Cushing (Nicholas Vince, Kinski from Nightbreed and the Chattering Cenobite from the first two Hellraiser films).

Sadly, these trailers are on the hard to find physical release of the documentary. You can watch it on Shudder right here, though!

Last year, Tom Holland announced that he’s writing Fright Night 2 as a book, with the goal of obtaining the rights to the series by 2019 and making a new movie. In the past, he’s talked about continuing the series by having single-father Charley Brewster inherit his mother’s home with his two teenage children learning that something evil is in the house next door — Evil Ed, who is trying to bring Dandrige back.

Whew! Here’s hoping you enjoyed our look at the past, present and hopefully future of a horror classic. And if you haven’t seen the original sequel, hunt it down! It’s pretty good!