Enzo G. Castellari directing the kind of action you demand from poliziotteschi.

Fabio Testi and David Hemmings as the tough undercover cop and driven agent against unstoppable crime.

Goblin fresh off Suspiria making this movie sound like nothing else.

The Heroin Busters is ready to own you.. 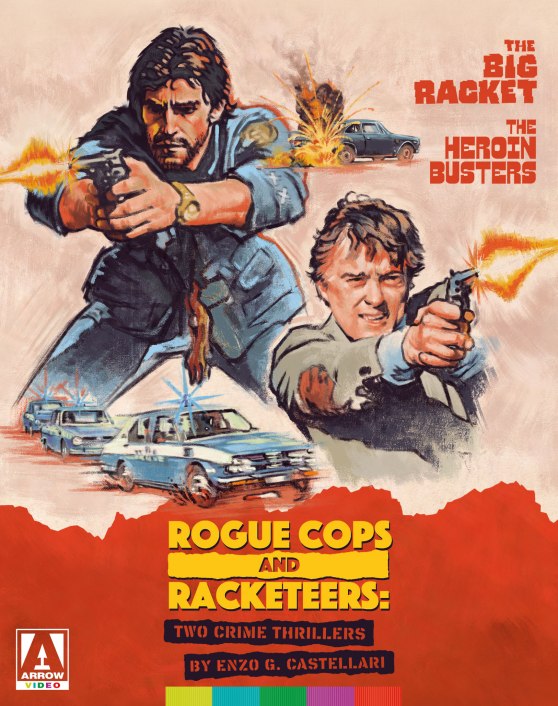 Mike Hamilton (Hemmings) is an Interpol agent trying to keep heroin from taking over Italy from his office. And from the streets, Fabio (Testi) is his undercover agent, getting in deeper and deeper into the drug trade until his cover gets blown and the world of crime comes for him. Can Mike save him in time?

That’s also totally Testi flying the plane in this movie.

Years before John Woo gave us bullet romance violence, Castellari has Testi sliding down stairs, blowing people away while looking improbably, effortlessly cool. It takes some time to get the action at the end of this movie, but you know, we could all use a little patience, because the payoff, for once, is more than enough.

The Arrow Video limited edition of Rogue Cops and Racketeers: Two Crime Thrillers has this movie and The Big Racket. Both films have brand new 2K restorations from the original 35mm camera negatives by Arrow Films, with restored original lossless mono Italian and English soundtracks and newly translated English subtitles for the Italian soundtracks. Both movies also have new audio commentaries on both films by critics Adrian J. Smith and David Flint and the limited edition packaging has reversible sleeves featuring original and newly commissioned artwork by Colin Murdoch, as well as an illustrated collector’s booklet featuring new writing on the films by Roberto Curti and Barry Forshaw. If that’s not enough, you also get twelve double-sided, postcard-sized lobby card reproduction artcards.

The Heroin Busters also has new video interviews with Castellari, Testi, Vanni, editor Gianfranco Amicucci, retired poliziotto and criminologist Nicola Longo (who consulted on the film); The Eardrum Busters, a new appreciation and career retrospective of composers Goblin by musician and disc collector Lovely Jon; the film’s trailer and an image gallery.

You can get Rogue Cops and Racketeers: Two Crime Thrillers from MVD and Diabolik DVD.