“And I looked, and behold a pale horse: and his name that sat upon him was Death, and Hell followed with him.” We’ve been living in the shadow of the nuclear clock since like mid 1940’s, but that wasn’t stopped Hollywood (and Australia, the Philippines and most especially, Italy) from making movies about the end of the world. You may have noticed that we’ve covered a lot of these movies. Here’s our ever-growing list of the ones that we feel just might be the best, yet in no particular order. 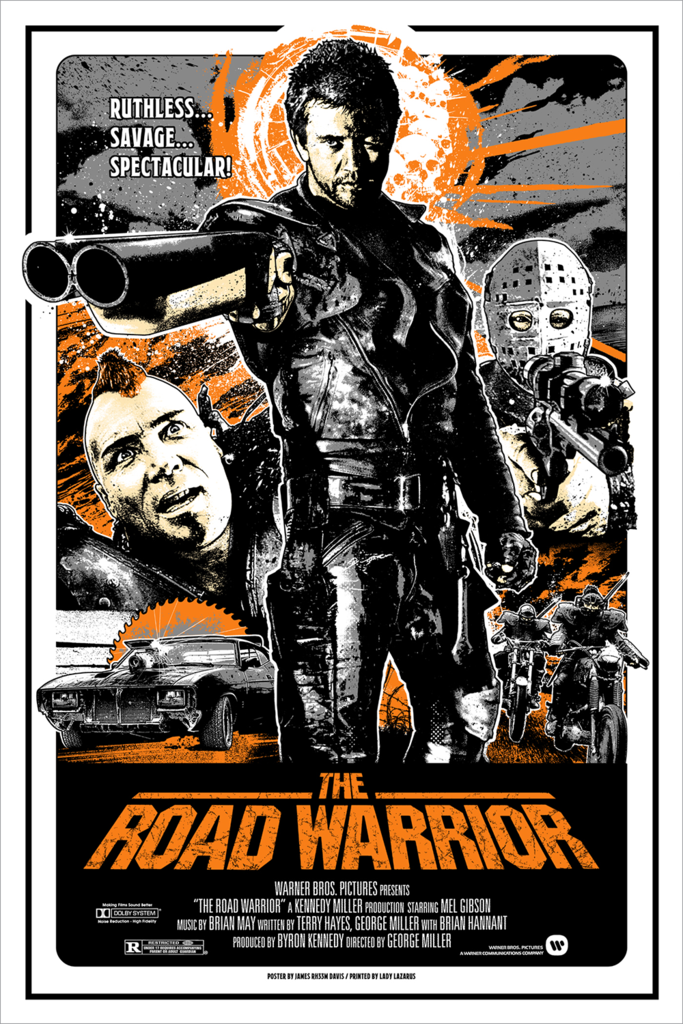 1. The Road Warrior series: No movie on this list made post-1979 is without a debt to this series of films. Starting with Mad Max, which presents a society on the verge of collapse and the lawman who tries to make sense of it, this series has one constant: Max Rockatansky. Whether he’s a cop, a survivor, a gladiator or even perhaps death itself, he’s definitely the most enduring character in the post-apocalyptic film genre. So many of the tropes of this genre find their root in these films: graffiti-covered muscle cars,  hockey masked or face painted body armored warriors, large stretches of the desert and/or bombed out cities and gas/water meaning more than money. They could make four hundred of these movies and I would watch every single one of them. 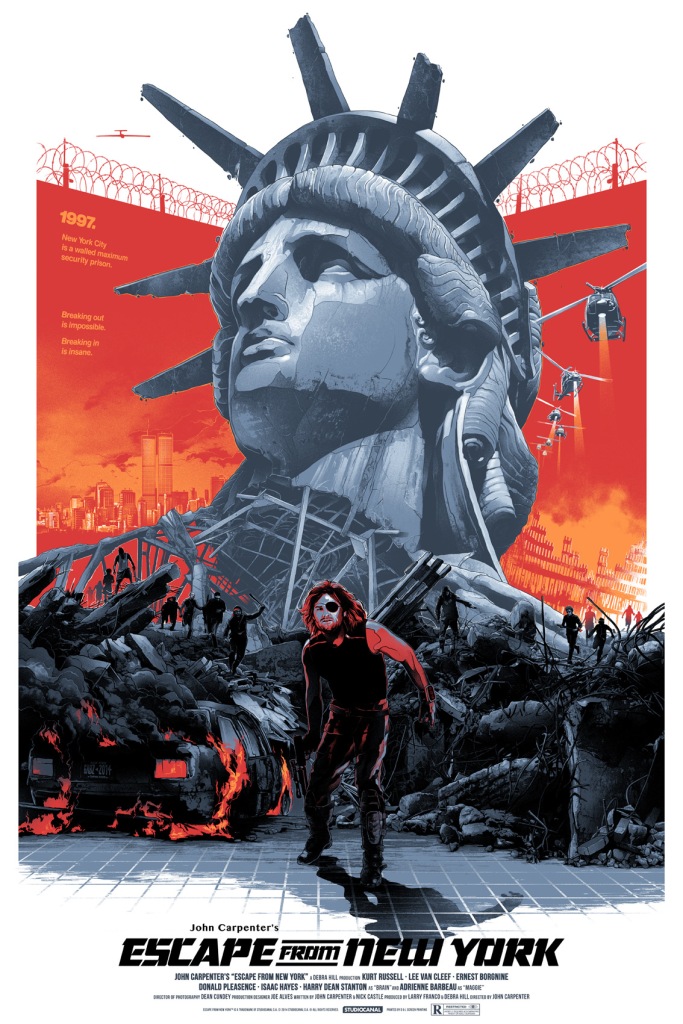 2. Escape from New York/Escape from Los Angeles: As the Italian apocalypse films will soon prove, the second source from which all decent end of the world movies spring from is the fertile brain of John Carpenter. This makes plenty of sense, as there’s a fine line between Snake Plissken and cowboys of American cinema, just as there’s not much difference between the plots of most spaghetti westerns and end of the world films. Well, except for all the mutants and cars, of course. 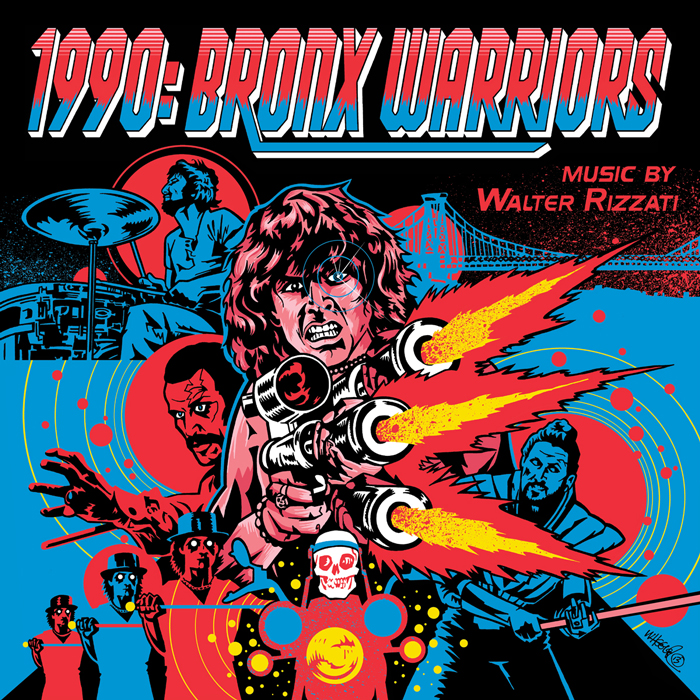 3. Enzo G. Castellari’s Bronx series: Starting with 1982’s 1990: The Bronx Warriors and followed up with 1983’s Escape from the Bronx, Trash and his gang the Riders face the end of all things head on. From Fred Williamson dressed as a pirate with a girlfriend that uses a Freddy Krueger claw and a whip as weapons to a modern dance troupe gang in silver face paint — not to mention a scene where a drummer randomly shows up at a gang summit — these films are the perfect synthesis of all that came before (The Warriors, The Road Warrior, Escape from New York). You can also kind of, sort of include Rats: The Night of Terror in these films.

4. Willy Milan’s Filipino post-apocalyptic films: You think the Italians have the patent on after the bomb fun? Nope. Let me introduce you to Willy Milan, the creator of two absolute gonzo films: W is War and Mad Warrior. The first starts with the story of a cop who gets his manhood severed and goes after the go kart riding gang that did it. And the second, well, that takes the sheer lunacy of the first and adds a villain who is a cyborg werewolf given to moonlit speeches. No words can contain just how beyond these films are — karate kicks, disco synths, lots of fireworks and plenty of bad haircuts.

6. Endgame: I can’t even put my thoughts about this movie into proper sentence structure, so let me just provide why this movie is so great with sentence fragments: Laura Gemser. Al Cliver. Geroge Eastman. A murderous gameshow. Fish mutants. Blinded ninja monks controlled by psychics. Armies of bounty hunters against the government. Mental powers. Sponsored murderers who become celebrities. Seriously, Endgame is one of my favorite movies of all time and yet, no one has released it on blu ray yet in the U.S. Let’s get on that!

7. 2019: After the Fall of New York: Sergio Martino got close to the end of the world with Hands of Steel, but for my money, this one is everything you want in an end of the world flick. You’ve got George Eastman as Big Ape, the guy who just wants to impregnate ladies. A hero named Parsifal. A mercenary with a hook for a hand. And music by Oliver Onions, the dudes who did the music to Yor, Hunter from the Future. We can’t be friends if you don’t watch this.

8. Warriors of the Wasteland: You though Enzo G. Castellari was done after the Bronx series? Dude — he’s just getting started. This is probably my favorite post-apocalyptic film ever made. George Eastman leads the Templars, a gang of anti-religious maniacs clad all in white, who face off against their former member Scorpion, Fred Williamson and Bob from The House by the Cemetery. This is the kind of movie that needs locked up and kept away from me or I’ll just watch it over and over again on a loop.

9. Death Race 2000: Perhaps even more than Mad Max, Death Race 2000 has put its stamp upon all car based apocalyptic films that would follow in its bloody wake. From the designs of the cars and outlandish characters like Frankenstein to its absurdist sense of humor (and let’s not forget appearances by Mary Woronov and Sylvester Stallone), director Paul Bartel set the bar high for all that would follow. 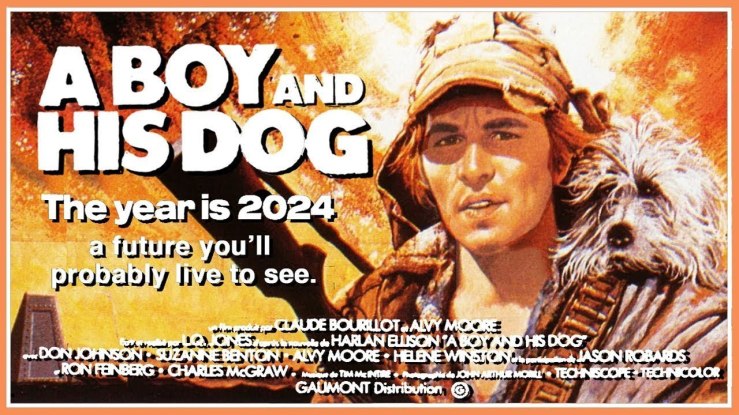 10. A Boy and His Dog: When legendary crank Harlan Ellison’s Vic and Blood series was adapted for the screen, the results were pretty awesome. The telepathic canine and human duo go up against a biosphere of perfect people who dress like it’s the 1930’s and wear theatrical makeup, all to ensure that the dog gets fed and the human gets laid.

Here are a few more for you to check out: Soylent Green, which gets more true every day; Logan’s Run, where no one lives past Life Day; Zardoz, where the Book of Oz ends up kind of sorta of being the Bible before Charlotte Rampling and Sean Connery hook up and turn into skeletons; and Firebird 2015 A.D., which has Darren McGavin loving muscle cars no matter what a totalitarian government does to him — which is sort of like what happened to Lee Majors in The Last Chase, but we digress.

What are some of your favorites? Let us know, below in the comments section.

And be sure to check out our Atomic Dust Bins, Part 1 and Part 2 for more films, as well as our Ten Post-Apocalyptic Vehicles features.