EDITOR’S NOTE: The Demons movies are perfect films. Seriously, these movies make me overjoyed every time I watch them. I’m insanely excited that this set is in my collection and I’ve run around the house with my ticket for the Metropol many times already! 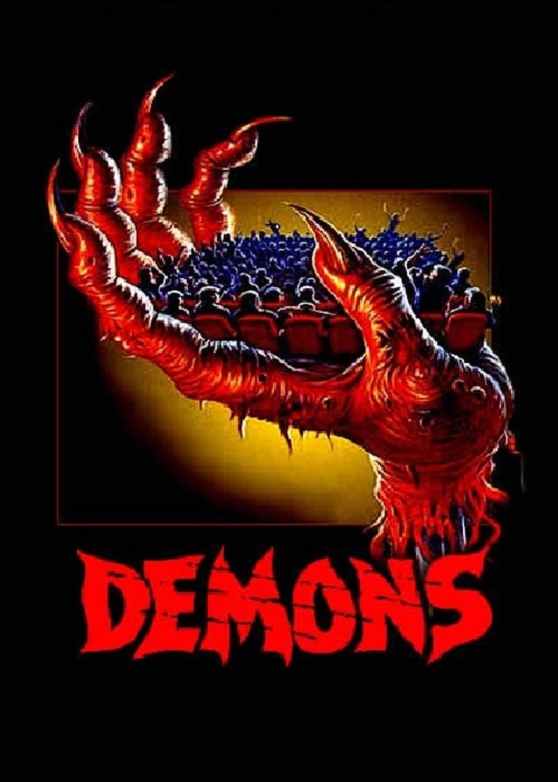 They will make cemeteries their cathedrals and the cities will be your tombs. With that line, you know that what you’re about to watch better be the most mind-blowing horror film possible. Good news — Demons is all of that and then some, the kind of movie that has everything that I watch movies for.

I can’t be silent or still while it runs, growing more excited by every moment. It is the perfect synthesis of 1980’s gore and heavy metal, presented with no characterization or character growth whatsoever. It’s also the most awesome movie you will ever watch.

This is an all-star film, if you consider Italian 80’s horror creators to be all-stars. There’s Lamberto Bava directing and doing special effects, Dario Argento producing, a script written by Bava, Argento, Franco Ferrini (Once Upon a Time in America, Phenomena) and Dardano Sacchetti (every single Italian horror film that was ever awesome…a short list includes A Bay of Blood, Shock, The Beyond, 1990: The Bronx Warriors, Blastfighter, Hands of Steel and so many more), and assistant directing and acting from Michele Soavi.

The movie starts on the Berlin subway, where Cheryl is pursued by a silver masked man (Soavi) who hands her tickets to see a movie at the Metropol. She brings along her friend Kathy (Paola Cozzo from A Cat in the Brainand Demonia) and they soon meet two boys, George (Urbano Barberini, Gor, Opera) and Ken.

The masked man has brought all manner of folks to the theater: a blind man and his daughter and some interesting couples, including a boyfriend and girlfriend, an older married one and Tony the pimp and his girls, one of whom is Shocking Dark‘s Geretta Giancarlo. As they wait for the movie to begin, a steel mask in the lobby scratches her.

The movie that unspools — a slasher about teenagers who disturb the final resting place of Nostradamus — also has that very same steel mask. When it touches anyone in the movie, they turn murderous. At the very same time, one of the prostitutes scratches herself in the bathroom and her face erupts into pus and reveals a demon. From here on out, the movie becomes one long action sequence, as the other prostitute transforms into a demon in front of the entire audience.

Meanwhile, four punks do cocaine in a Coke can and break in, releasing a demon into the city as the rest of the movie audience attempt to escape and are killed one by one. Only George and Cheryl survive, as our hero uses a sword and motorcycle to attack the demons before a helicopter crashes through the roof. But then the masked man attacks them!

I’m not going to ruin the rest of the movie, only to say that even the credits offer no safety in the world of Demons. And oh yeah — Giovanni Frezza (Bob from House by the Cemetery) shows up!

Look for Argento’s daughter Fiore as Angela and Ingrid the usherette is played by Nicoletta Elmi, who was the baron’s daughter in Andy Warhol’s Frankenstein, as well as appearing in Baron Blood, A Bay of Blood and Who Saw Her Die?

This is but the first of a series of movies with the title Demons. I can’t do justice to the twists and turns of how that all works. Instead, I turn to the master, Joe Bob Briggs.

Demons is ridiculous. Pure goop and gore mixed with power chords, samurai swords, punk rockers and even a Billy Idol song which had to blow the budget. It also looks gorgeous — filled with practical effects, gorgeous film stock and amazing colors, no doubt the influence of Bava’s father. The scene where the yellow-eyed demons emerge from the blue blackness is everything horror movies should be.

This doesn’t just have my highest recommendation. It earns my scorn if you haven’t seen it yet! 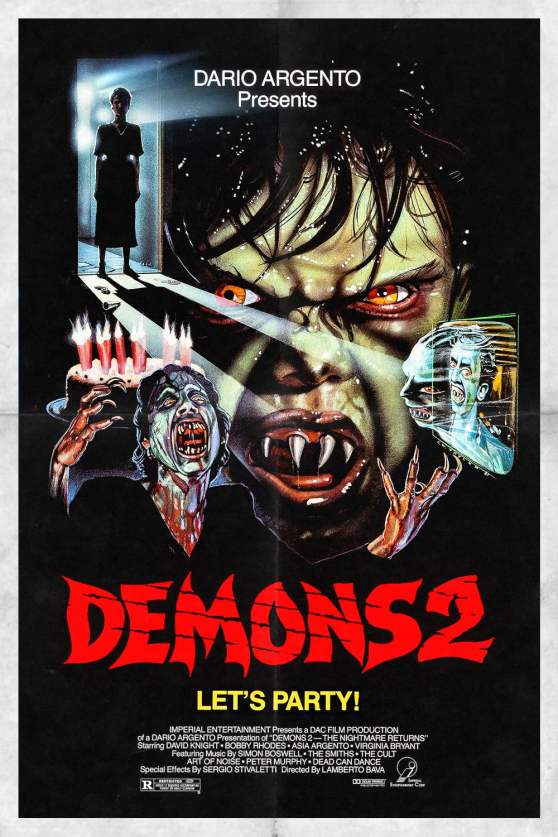 Let’s just assume that the events of Demons actually happened, as this movie does. Released just seven months after the original, this movie opens with the residents of a high-rise apartment building watching a movie dramatization of the events that took place in that film. They watch as several teenagers trespass into the closed-off city that was destroyed after the demonic outbreak. Finding the dead body of a demon, one of the teens accidentally drips blood in its mouth and the whole thing starts all over again.

Sally Day (Coralina Cataldi-Tassoni, Mother of Tears, Opera) is upset that her boyfriend hasn’t come to her sweet sixteen party — or as they say in Italy, dolce sedici anni — and she decides to watch the movie. So, you know, as these things happen, a demon crawls out of her television set and infects her. She kills nearly everyone at her party and turns them into more demons, who begin to infect the entire apartment building. Little kids, dogs, cops, bodybuilders, pregnant women — no one is safe from these demons.

George and Hannah (David Edwin Knight and Nancy Brilli, who was also in Body Count) spend most of the movie trying to escape Sally so that they can have their child. She’s nearly unstoppable, plus she has a flying demon on her side.

Italian movie fans should keep their eyes open for Asia Argento, who debuted in this film as Ingrid. Plus, Bobby Rhodes (from the original, as well as Hercules and War Bus Commando), Virginia Bryant (who is also in the unrelated sequel Demons 3: The Ogre), Lino Salemme (Ripper from the first film), Davide Marotta (who played a child alien in a very famous series of Italian Kodak commercials and was also the monstrous boy in Phenomena) and Michele Mirabella (Dancing Crow from Thunder).

Originally, Hannah’s baby would become a demon inside her and claw its way out of her stomach. This scene was taken out when Lamberto Bava and Dario Argento decided they wanted a happier ending. Which is nice, I guess.

After all, this movie is more about jump scares and less about freaking you out with the sheer amount of gore that it features. Is it any wonder that it has less of a metal soundtrack and instead features new wave bands like The Smiths, The Cult, Fields of the Nephilim, Dead Can Dance, Peter Murphy, Love and Rockets, Gene Loves Jezebel and The Producers?

I love the clip above, which inspired this article and the video I created: So what’s up with all the Demons sequels? 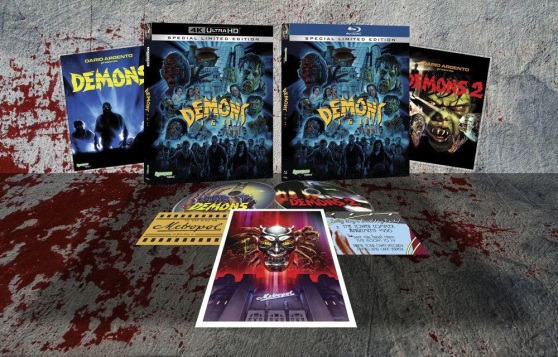 Synapse has released an incredible package perfect for Demons fans! First off, you get limited edition O-Cardsllipcover packaging featuring new artwork by Juan José Saldarriaga and Chris MacGibbon, a reproduction of the original movie ticket from Demons, a special Demons 2 birthday party invitation, a fold-out poster of Demons artwork from Wes Benscoter and reversible cover art.

Each movie is overstuffed with extras, kind of like a pus filled zit on Rosemary’s face! Demons has three versions of the film: the full-length original cut in English and Italian, and the shorter U.S. version featuring alternate dubbing and sound effects. There’s also new audio commentary by critics Kat Ellinger and Heather Drain, co-hosts of the Hell’s Belles podcast. There’s also an amazing audio commentary with director Lamberto Bava, SPFX artist Sergio Stivaletti, composer Claudio Simonetti and actress Geretta Geretta that was a joy to listen to! Plus there are all sorts of features on the film, as well as trailers.

Demons 2 has new audio commentary by film critic Travis Crawford, an interview with Sergio Stivaletti and features on Roy Bava, Lamberto Bava, Simon Boswell and a visual essay on the space and technology of both movies by author and critic Alexandra Heller-Nicholas. And of course — trailers and newly translated subtitles.

You can get it from Synapse and MVD but hurry! There are only 6,000 copies made!

4 thoughts on “SYNAPSE BLU RAY RELEASE: Demons I and II”