Marisa Mell is the female George Eastman. No, she doesn’t act like a wide eyed gigantic maniac in every movie. It’s just that no matter what movie she appears in, just her name being in the credits guarantees that I will watch the film.

Also known as …dopo di che, uccide il maschio e lo divora (…After That, It Kills the Male and Devours It), which is one of the best titles ever.

A wealthy landowner  named Don Miguel (Stephen Boyd, who was in Ben-Hur) is haunted by his dead mother and missing wife, who may have been murdered, when he meets a gorgeous runaway named Marta (Mell), who may have killed the man who she was running from.

I haven’t seen any of José Antonio Nieves Conde’s films before, but this movie makes me want to watch every single one of them.

The strange thing is that this movie pretty much became true in a way, as Boyd and Mell fell in love, as they made this and The Great Swindle one on top of the other*. Despite Boyd not wanting anything to do with Mell at first — was the man made of stone? — he eventually fell for her and they married in a gypsy ceremony near Madrid, cutting their wrists and sealing their blood. The couple was so possessed buy the mystical and sexual desire they felt for one another than they even went to have it exorcized in another ritual.

Boyd had to run from her, as the relationship physically and mentally exhausted him. As for Mell, she’d tell the Akron Beacon Journal that “We both believe in reincarnation, and we realized we’ve already been lovers in three different lifetimes, and in each one I made him suffer terribly.”

In the same year that all this happened, Mell was also dating Pier Luigi Torri, an aristocratic nightclub owner who fled the country after a cocaine scandal. Arrested in London after it was discovered he had a $300 million dollar gold mine and had also scammed a bank, he somehow escaped his jail cell and ran from the police across rooftops, escaping to America for 18 months. Evidentally, Mell dated Diabolik in art and in life.

So let’s talk about the Mell relationship in the film instead of reality. She has come to live with Miguel, who collects insects and has two servants who keep things tidy. She enters his life by claiming that she is on the run for a self-defense murder. Miguel decides to protect her from the police because she looks like his wife Pilar (also played by Mell) who has left him or was killed. He’s also tormented by the death of his sainted mother while she may not be who she says that she is.

Oh yeah — and now Marta is acting as Pillar to throw the police off the scent of the man who she either wants to marry or destroy. 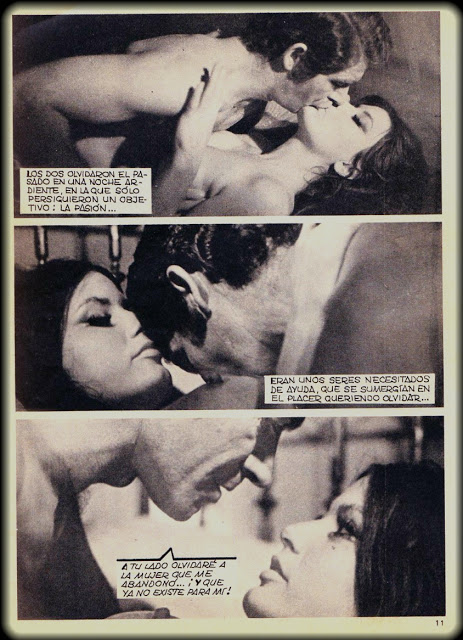 Marta is a gothic-style giallo but is also dreamlike throughout. There’s a continual obsession with placing Mell in front of mirrors. And for someone who was rarely used outside of her sex appeal in films, she absolutely haunting here. Somehow, Spain put this movie forward for Oscar consideration and if I ran those popcorn fart boring awards, I would have given this every single award.

Sure, this movie rips off Hitchcock, but it also wallows in sin, which is what I demand from the giallo that I come to adore. Somehow, someway, this aired on broadcast TV as part of Avco Embassy’s Nightmare Theater package, along with A Bell from Hell, Death Smiles on a Murderer, Maniac Mansion, Night of the Sorcerers, Fury of the Wolfman, Hatchet for the Honeymoon, Horror Rises from the Tomb, Dear Dead Delilah, Doomwatch, Witches Mountain, Mummy’s Revenge and The Witch. Man, how did any of those air on regular TV?

*Credit to the Stephen Boyd Fan Page and Marisa Mell: Her Life and Her Work for this information.