AUTHOR’S NOTE: This article was originally posted on July 9, 2019. You have to love when a movie starts like The Prisoner and ends with Dennis Rodman, Mickey Rourke and a tiger menacing a baby.

If you think of directors from the Golden Age of Hong Kong cinema, Tsui Hark has to be on the list thanks to directing movies like Zu Warriors from the Magic Mountain and the Once Upon a Time in China series, as well as producing The Killer, A Better Tomorrow and Black Mask amongst many others.

In the 1990’s, instead of continually stealing from Hong Kong movies, Hollywood decided to go directly to the source and work with its most well-known directors. Other than this film, Hark also made another Van Damme film, Knock Off, which co-starred Rob Schneider. Frustrated by the lack of creative control, hark would eventually return to Hong Kong.

Somehow, one of world cinema’s greatest action directors ended up working on a film with Dennis Rodman in it. The results? Three Razzie wins for worst new star, worst supporting actor and worst screen couple, all for Rodman with Van Dam helping on the latter. Still, Rodman has no less than six hair color and style changes in the film, continuity be damned.

Jean-Claude Van Dam is Jack Paul Quinn, an anti-terrorism expert brought out of retirement by his nemesis Stavros (Mickey Rourke, so for those of you like me who were always wondering, “Could JCDV beat up Mickey Rourke?” you’ll get your answer). That big bad blames our hero for the death of his son, so he kidnaps Jack Paul’s pregnant wife Kathryn.

Where can our hero turn? To one man: the arms dealer named Yaz (Rodman), who has weapons so new even he doesn’t know what they are.

What Stavros doesn’t know is that Jack Paul tried to stop the mission that killed his boy, but that doesn’t matter. His failure to stop the man led to him being placed in The Colony, which is just like the TV show The Prisoner, in that it’s used to keep agents too valuable to kill but too dangerous to set free. So they all work toward monitoring terrorist threats and are kept from the rest of the world and their families because, you know, spy business.

While Jack Paul is there, his handler is Alex Goldsmythe (Paul Freeman, Belloq in Raiders of the Lost Ark). When Stavros ends up kidnapping our hero’s wife, Yaz helps him find his enemy and battle him in the bomb-rigged Roman Coliseum (actually the Arles Amphitheater in Southern France).

Somehow, I didn’t ever think I’d see a movie where Van Damme and Rodman battled a tiger and Mickey Rourke while trying to save a baby in a basket. Yet here it is. Sometimes I wonder if I’m doing things in my life the right way. I guess this is proof one way or the other.

There is an amazing scene where Van Damme uses an apartment to train to escape The Colony. Watch him do curls in his bare feet! Watch him light a cigarette to test how long he can hold his watch in a bathtub! Watch him do many, many splits! Also: every single time Van Damme and Rodman fist bump, I would collapse in total guffaws, as Hark decided to do a short Fulci zoom at times into their hands. Amazing.

That said, the fights are decent — perhaps because Sammo Hung was choreographing them. I wonder what the original film — The Colony — was like before JCVD’s lengthy rewrites. I’d assume Rodman was nowhere nearby, nor was there a scene where Van Damme dressed as a street punk. 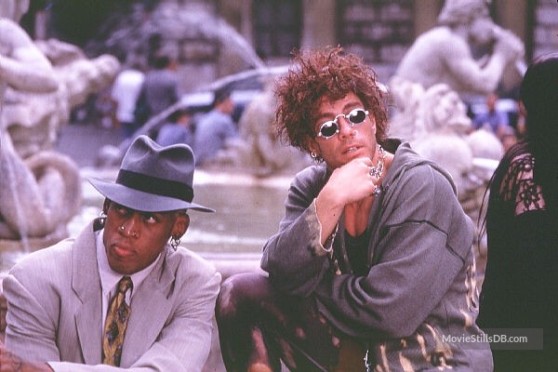 You can get the new blu ray reissue of Double Team from Mill Creek Entertainment.

DISCLAIMER: Mill Creek Entertainment sent us this movie, but that has no bearing on our review.