Director Richard Casey made one of the most bonkers movies I’ve ever seen, Horror House on Highway 5. I’m pleased to report that this movie — which melds Faust — no, not that Faust — and the Los Angeles music scene in mix of the first two Decline of Western Civilization films to create a blast of pure strangeness. Imagine if the Dark Brothers (Night Rhythms) or Rinse Dream made one of their films with no pornography, but after doing even more drugs and never sleeping. It’s that good.

Lemmy (Phil Ward, who shows up Horror House on Highway 6, as well as being the art department for Space Mutiny, if you can believe that) is the lead singer of a band that’s not going anywhere until he meets Mr. Tanas — pronounced tannis, like the root or spelled backward like…oh you get it — who offers him fame in exchange for his soul.

That’s the basic story, but this cough syrup drinking, drug abusing, machine guns in the recording studio affair is unlike any movie you’ve watched before.

David Marciano, who plays Mr. Tanas, would go on to appear on the show Homeland. Phil Therrien, who was Dr. Mabuse in the two Highway films, is also in this.

If you’re looking for a movie where a hobo screams “Black Betty,” where a mother looks for her son by killing everyone she comes near, where sound engineers act like jerks to everyone near them, where singers proclaim that they are Satan’s son, a gang shows up called Satan’s Cheerleaders and a cursed establishment is named Bar Sinister, well, look no more.

It’s not great, but it’s awesome. If you understand that sentence, you’re going to love this movie. 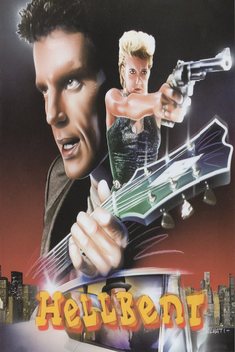 Just when I think you’ve reviewed “everything” at B&S About Movies. Why do I doubt my brother-in-VHS arms would not have reviewed the two-movie oeuvre of an ex-rock video director who gave us two of MTV’s most-aired videos: Blue Oyster Cult’s “Burning for You” and Aldo Nova’s “Fantasy.” I remember this SOV-VHS, as well as the bonkers Horror House on Highway 5 (it’s only a matter of time before we get a remake — with a killer in a Donald Trump instead of Richard Nixon mask), and I’d always felt Hellbent was a Satanic, F-up version of Suburbia, which is an excellent punk-era rock flick from Roger Corman directed by Penelope Spheris. But the Decline movies by the divine Ms. Spheris work as well, in comparison. You need another Faustian rock ‘n’ roll tale, be sure to check out the Paul Williams-starring Phantom of the Paradise. And watch Hellbent. You have to. It’s the shite.

You can get the Blu-ray of Hellbent from Vinegar Syndrome or watch it on Amazon Prime.