Any movie that refers to its titular monster as the “critter from the shitter,” you know what you’re getting into. Oh, Italian cinema. I love you so. 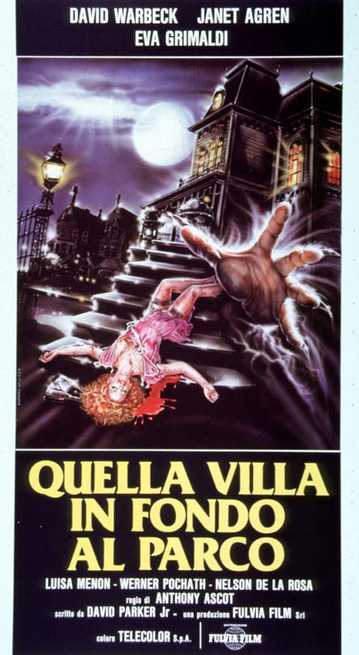 Marlis and Peggy are modeling on a Caribbean Island when Peggy gets eaten by rats. You know. The kind of thing that happens every time they shoot the Sports Illustrated Swimsuit Issue cover.

Peggy’s sister Terry (Janet Ågren, City of the Living Dead, Eaten Alive!) shows up to investigate along with Fred (David Warbeck, The Beyond). They learn that the real culprit is a two-foot tall ape/rat hybrid, which is something out of Alex Jones’ worst nightmares. And yours and mine as well, as it’s played by Nelson de la Rosa, who you may also remember as Marlon Brando’s miniature twin in The Island of Dr. Moreau. His attacks are filled with screaming rat noises and really seem like harrowing moments to have filmed.

Shockingly, this movie is directed by Giuliano Carnimeo, whose Case of the Bloody Iris is one of my favorite giallo films! It’s written by Dardano Sacchetti, who of course helped create The Beyond, The New York Ripper, 1990: The Bronx Warriors, The Church and so many other Italian genre favorites. Dardano, thank you for all the complete lunacy and demented fun that you have brought into our lives!

The end of this film is a joy. A shocker that will surprise you with just how effective Italian genre filmmaking can be. It made me howl in abject joy!

Shameless put out a region 2 DVD a few years ago, which you can find here but the American version from Apprehensive Films is out of stock. Hint: You can find this one on YouTube.