Herschell Gordon Lewis pretty much invented gore. But with this movie, he showed us all how to make a biker movie that takes it to the limit and way beyond.

The Maneaters are the secret that Karen keeps from her family. They’re a rough, tough and ready to rumble group of female motorcyclists who hold weekly races to determine who gets to pick first from their many male suitors, or as they call it, the stud line.

Karen wins this week’s race against the gang’s boss, Queen. And even though Karen wins that first pick, she chooses Bill for the fourth week in a row. That’s against the code of the Maneaters, who demand that no one can be attached to anything or anyone save the gang. “All men are mothers!” they shout. “No Manhunter falls in love!” they scream.

Honey Pot (Nancy Noble, Jackson County Jail, Chesty Anderson U.S. Navy) is the teenage mascot of the gang. She’s also following Karen and informs the gang that she’s fallen in love. They demand that she come to the runway that evening, where she must join them in beating the shit out of Bill, then dragging him behind her bike until he dies. She does it. She’s a Maneater.

This also makes Honey Pot an official Maneater. Her left hand is cut open and each girl licks the blood and kisses her, then she strips and is covered in honey and chocolate syrup before she entertains every man on the stud line. Finally, she is cleaned off and given her jacket, proclaiming that she is a member. 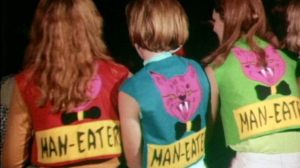 This movie presents episodes in the life of the gang, like them going to Medley, Florida and driving their bikes through lawns, in front of and right through businesses and up and down the streets. They’re so mean and nasty that the townsfolk refuse to press charges.

There’s another stud line race, but an all-male gang comes out for a race. It starts fun, but Queen and Joe Boy end up having a knife fight and the Maneaters end up beating the shit out of the guys.

Meanwhile, Karen’s old boyfriend Ted tries to get her to leave, because the male gang is coming back and they want blood. He even infiltrates the stud line to get to her. During a huge orgy, he takes her to another room to try and save her, but she keeps telling him that she’s in too deep to ever go back to a normal life. While this is going on, the gang kidnaps Honey Pot. When she’s dropped off in the morning, she’s bruised, beaten, covered in blood and even has had a ring nailed through her nose. Joe Boy threatens that the Maneaters should stop now.

This movie is in an alternate universe, one where women bike gangs pretty much rule the world. That means that instead of quit, they go even crazier, leaving broken bodies in their wake as they hunt for Joe Boy. Whitey and Terry find him, provoke him and leave a motorcycle so he can follow them. Queen and her gang — Karen, Delta, Supergirl, Ginger and more — wait as a wire decapitates their most hated enemy. Queen leaves her belt as a signature.

Ted tries one more time to take Karen away, but she tells him that she belongs to the Maneaters. The police arrest them all for Joe Boy’s murder, but after the credits, we learn that they don’t have enough evidence.  How could they? The Maneaters are just too powerful. Just stare at them as they ride off into the sunset.

Shot in two weeks, this movie was picked as one of Joe Bob Briggs’ Sleaziest Movies in the History of the World. Of that list of films, it’s worth noting that ten of the fourteen came from Lewis.

This movie is filthy, grimy, messy and completely wonderful. It’s what I want every biker movie to be. It’s also filled with Lewis’ trademark lack of worry for amateurish performances. After all, the majority of the women in this film were actual bikers, picked as much for the bikes they owned and could ride as they were for their looks.

Every single one of them lives up to the Maneaters code: We don’t owe nobody nothin,’ and we don’t make no deals; We’re swingin’ chicks on motors, we’re man-eaters on wheels.

I can’t even put into words — I’ve tried — how much I love this movie.

Something Weird put this out on DVD a while ago. It’s in their Herschell Gordon Lewis collection and on a single DVD, too. You can grab that on Amazon. If you really into his films — and you should be — the giant box set from Arrow is also available here.