Pre-credits disclaimer: The following feature is one of the most violent films ever made. There are at least two dozen scenes of barbaric torture and sadistic cruelty graphically shown. If the presentation of disgusting and repulsive subject matter upsets you, please do not view this film. For the rest of us, let’s watch something awesome and laugh at those babies who skipped out! 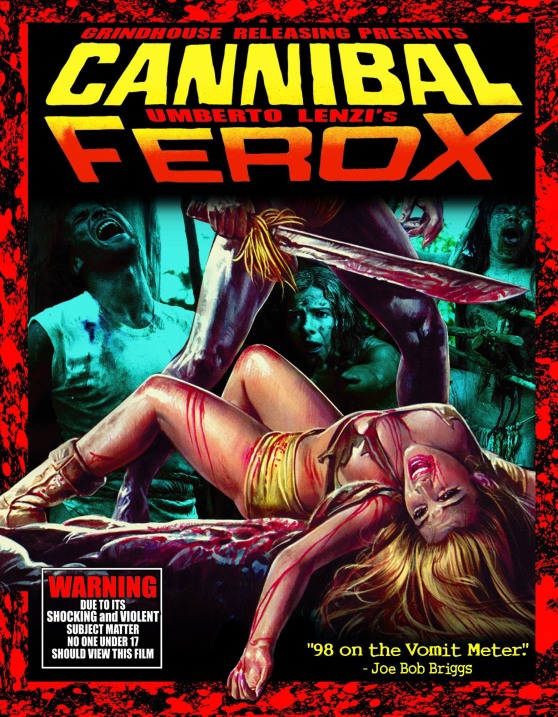 Make Them Die Slowly. With an alternate title like that, you know what you’re getting into here. You’re getting into Umberto Lenzi’s (Eaten Alive!, Spasmo, Man from Deep River, Eyeball) dark and depraved voyage into the world of cocaine-addled maniacs battling cannibals. Beware.

Considered to be “the most violent film ever made” and “banned in 31 countries,” Cannibal Ferox is packed with both simulated and real violence (the credits should probably read animals were harmed during the filming of this motion picture). It’s all about a gang of malcontents who make the dumb mistake of not only going into the jungle, but fucking with the wrong people.

In New York City, Mike (Giovanni Lombardo Radice, City of the Living Dead, Stagefright) is on the run from the mob, as he owes them $100,000.

Meanwhile, in Paraguay, brother and sister Rudy and Gloria (Lorraine De Selle, Emanuelle in America) and their friend Pat (Zora Kerova, The New York Ripper) are heading into the rainforest. Gloria has a theory that cannibalism is a myth and wants to prove it. They run into Mike and his partner Joe, who have run afoul of some cannibals. Soon, Gloria goes missing and everyone starts to look for her.

Soon, Mike’s having sex with Pat, doing coke and trying to get her to rape a native girl, as you do. She can’t do it, so Mike kills the girl as Joe reveals — as he dies — that they were responsible for making the cannibals go wild as the result of exploiting them for emeralds and cocaine. Turns out killing and torturing natives isn’t new to Mike!

Rudy tries to escape, but he is caught in a trap in the jungle and attacked by piranhas before the natives kill him with a poison dart.

Pat and Gloria are put in a hole while Mike is in a cage. A native man tries to help the women escape, as Pat had saved him after the virgin was killed. However, Mike fucks it all up for everyone and runs into the jungle to escape. The natives slice his hand off and recapture him. And then they show off their brains, as they tell a search and rescue party that the outsiders all died after a crocodile attack.

Gloria can only bear witness to Pat being hung by her breasts until she is dead and Mike’s skull being cracked open and eaten. The native who tried to help before now frees Gloria and they run through the desert before another trap kills him. Luckily, Gloria finds some trappers who rescue her. She tells them the same story as the natives: everyone else was killed by crocodiles.

Once Gloria returns to New York, she writes a book that supports her theory and continues the lies called Cannibalism: End of a Myth.

This movie is a fine piece of cannibal filth, but is tainted by the real animal deaths. Giovanni Lombardo Radice objected and refused to participate, leading Lenzi to say, “De Niro would do it.” Radice replied, “De Noro would kick your ass all the way back to Rome.” The stand-in who did the actual killing was cut so badly that he almost severed a main artery, which Radice looked at as karma. I agree.

Ready to puke? Then turn on Shudder and get the flesh feast started!

You can also enjoy High Rising Productions’ Calum Waddell’s documentary Eaten Alive! The Rise and Fall of the Italian Cannibal Film (2015), which is featured on the Grindhouse Releasing Blu-ray for Cannibal Ferox in the U.S. and the U.K. Blu-ray for Zombi Holocaust by 88 Films. Our much adored Umberto Lenzi, Ruggero Deodato, Sergio Martino, along with actress Me Me Lai offer their genre insights for the documentary.