Cannibal Holocaust has always been a movie that by reputation that I’ve avoided. It’s been tagged as “the one that goes all the way” and has been banned in over fifty countries. And it isn’t every movie that gets confiscated ten days after its premiere with the director arrested and charged with obscenity. 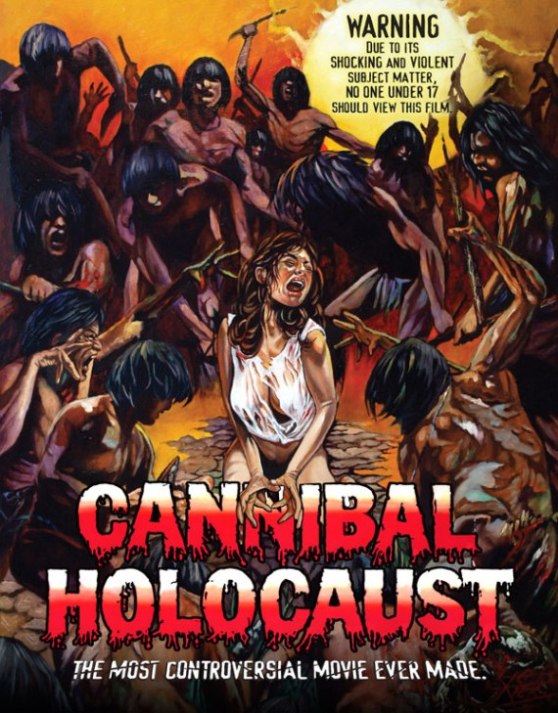 By January 1981, thanks to the French magazine Photo, authorities believed that the deaths in the film were indeed real, playing into the urban legend of the snuff film. The charges against director Ruggero Deodato (The House on the Edge of the Park, Raiders of Atlantis) now included murder.

The problem was that the actors playing the film crew had been paid for an entire year to disappear. That way, the public would believe that the “found footage” in the film was indeed real snuff footage. Sometimes, a PR idea works too well. Deodato had to gather three of the actors and explain how the film was simply a horror movie and the effects, even the grisly impaling scene near the close of the film, were fake. He even provided imagery of the actress in that scene joking around after the filming.

Deodato also explained in court how the impalement scene was faked: a bicycle seat was attached to the end of a pole, upon which the actress sat. She then had the rest of the pole in her mouth and looked up to complete the effect. Deodato also gave the court photos of the girl interacting with the crew after the scene had been filmed.

The murder charges were dropped, but the roughest part of the film — animal cruelty — remain. Today, Deodato condemns his past actions, in which six animal deaths appear onscreen. This mixture of the real — animals — and unreal — humans — lends itself to the frightening fact that it’s nearly impossible to separate what is fact and fiction here. I’m not justifying it. In fact, I hate that these scenes are in the movie, because I find them completely unnecessary to the plot. The film would be just as rough and brutal without them. The same message of man’s inhumanity to man, despite civilization, would remain.

Let’s get into it. And again, let me warn you. This movie is not pretty.

An American film crew that was filming the indigenous tribes of the Amazon rainforests has disappeared. They are Alan, the director; his girlfriend, Faye; and the cameramen, Jack and Mark. Deodato cast these roles with inexperienced actors from the Actors Studio in New York City. They’d be able to speak English, as he saw the film having an international scope. And they were unknown, which would help when it came to the legitimacy of the snuff angle. However, Mark (Luca Giorgio Barbareschi) and Faye (Francesca Ciardi) were cast so that the film because they were Italian speakers (to ensure that the film would be recognized as being covered by Italian law).

Harold Monroe (Robert Kerman who was also in Eaten Alive! and several pornographic films under his stage name, R. Bolla) is an anthropologist at New York University who agrees to lead a rescue team. Through his adventures, he meets the Yacumo tribe and learns that the documentary crew caused create hostility amongst the native population. Heading deeper into the “green inferno” (the original name for the film, as well as the title of Eli Roth’s 2015 film), he encounters two warring tribes, the Ya̧nomamö and the Shamatari. They encounter a group of Shamatari warriors and follow them to a riverbank, where they save a smaller group of Ya̧nomamö from death. The Ya̧nomamö invite Monroe and his team back to their village

In gratitude for saving the Ya̧nomamö, the elders incite Monroe and his team back to their village. To gain their trust, Munroe bathes nude in a riverbank with the female natives. They then take him to a shrine filled with the rotting bodies of the original crew. He trades his tape recorder for the film that Alan captured. The elders only have one final request: he must dine with them and consume human flesh.

We return to civilization. New York City to be precise. The network execs at the Pan American Broadcasting System want Monroe to host a broadcast of the recovered footage, but he wants to watch it to be sure. Watching Alan’s last documentary, The Last Road to Hell, he watches executions and violence in several war-torn countries, only to later learn that much of this footage was staged. Deodato came up with this angle while discussing the way the Italian media shared news coverage of the Red Brigades. He felt that the reports were sensationalistic, decrying violence while promoting it. He also felt that there was no way they could have obtained their footage without staging the camera angles.

Monroe then watches the real footage. This is the part of Cannibal Holocaust that I would endorse — that it deliberately plays with the way that we consume media, forcing the viewer to rewind and rewatch. Every time that we feel that we’ve escaped the horrors of the jungle, we are doomed to return, to see the real story beneath the gloss, the gore behind the smiles.

A crew follows the friends and family of the dead documentarians. We learn banal moments of their lives, see that even their own wives and fathers hated them. There’s a really strange moment where a nun is interviewed while children look completely horrified to have strangers in their midst. This footage is just as unsettling as the gore on a much more emotional level.

The real truth? The documentary crew were worse than anything they’s find in the Amazon. The crew burned down the set, not another tribe. He’s seen the footage and demands that it never be aired, but the higher-ups refuse.

That’s when Munroe pulls out his trump card: the unedited footage, which only he has seen. The men attack and rape a native girl, despite Faye’s protests. They find that same girl impaled on a wooden pole in punishment for the loss of her virginity. The Ya̧nomamö return to get revenge for the girl, hitting Jack with a spear, at which point Alan shoots him so that his cameras can record the natives eating him). Faye is captured and Alan debates saving her, but decides that he would rather have the footage of her being raped, beaten and beheaded. Finally, the natives find Mark and Allen as the camera drops to the floor, revealing Alan’s blood covered face.

Then, and only then, do the executives demand that the film be destroyed. The end credits try and play into the snuff angle one more time: “Projectionist John Kiroy was given a two-month suspended jail sentence and fined $10,000 for illegal appropriation of film material. We know that he received $250,000 for that same footage.”

Supposedly, this is a reference to another inspiration Deodato had, as an Italian network was putting together a real documentary about a real crew who was lost in the real Amazon and its real cannibals. The documentary, showing incidents he depicted in the film, was destroyed after its discovery. An Italian cable network claimed it had a copy and was going to show it uncut. It never showed the film, but supposedly their copy of the original was screened by a distributor (John Kiroy?) for Deodato. This sounds like the kind of stories that Rosemary’s Baby producer William Castle cooked up after the film was made.

Stories like that seem to be a trend when you discuss Cannibal Holocaust.

Like the actor who played Alan, Carl Gabriel Yorke, who claimed that Francesca Diardi, who played Faye, wanted to skip rehearsal and actually have sex. She claims that their love scene in the film was actual sex and that they were off-screen lovers. I’ve also heard that she objected to the film’s sexual content and wouldn’t bare her breasts until Deodato dragged her off set and screamed at her.

Or that the actor who played Miguel lost his father the day they shot the discovery of the shrine. Production stopped so that he could attend the funeral, but in that scene, when he cries, those are real tears.

If you read the stories online about the actual making of the film, it’s hard to tell where the false camera crew’s antics and the real moviemaker’s begin and end.

In an interview on the Grindhouse Releasing DVD of the film, Yorke says that the set had “a level of cruelty unknown to me.” Kerman claims that Deodato had no remorse and that they’d get into long arguments throughout the shoot, with the actor claiming that the director was sadistic to people who couldn’t answer back to him. He also walked off the set, refusing to be part of the animal cruelty.

Even the pay was messed up. Yorke was paid less than promised and in Columbian pesos, no less, before threatening to quit. And the native extras are said to have gone unpaid.

Another question in my head: How much of this film was inspired by Gualtiero Jacopetti and his cycle of mondo films, like Mondo Cane, Africa Addio and Goodbye Uncle Tom. I think Deodato tips his hand toward this influence by using the music of Italian composer Riz Ortolani, whose song “More” was featured in Mondo Cane (it was nominated for an Academy Award for Best Original Song in 1963). Ortolani’s soundtrack is, well, the best part of the film. The opening song is gorgeous and lush, with only a subtle hint that all will not be well.

It’s hard to truly believe in the “who are the real animals” narrative when it seems like Deodato learned none of those lessons for himself. Still, I feel that films should challenge you and push you and make you think. I wouldn’t recommend this film. I’m not upset that I watched it. But I know how people are about having their sensibilities threatened and this is a film that will bleed, puke and piss all over them before eating the remains.

Nevertheless, if you want to watch it for yourself, you can always find it right here on Shudder.