There is no way I can be objective about this movie. It is everything that movies should be in one film. It’s a revision of The Magnificent Seven, which in itself is just a cover version of The Seven Samurai. It has John Saxon as a face painted baddy whose body is falling apart. George Peppard plays a drunk Han Solo. And Sybil Danning plays a valkyrie in form-fitting body armor. In short, it is everything that an eight-year-old boy wants to see at the drive-in. 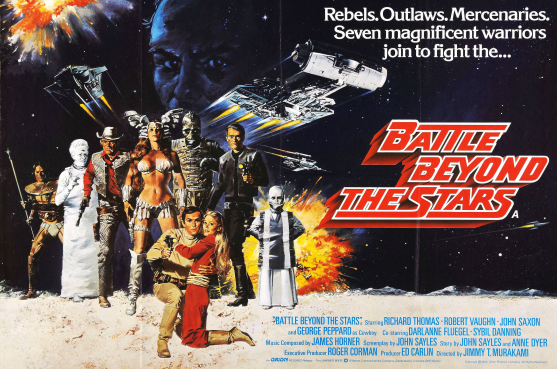 Sador (Saxon) and his mutant army are attacking the peaceful planet of Akir, a place that only has one warrior left — Zed (Jeff Corey, True Grit, Butch Cassidy and the Sundance Kid), a blind warrior who can’t fight any longer. Unless Akir surrenders in one week, Sador will use his Stellar Converter to turn the planet into a star, killing everyone.

Zed has an idea — hire mercenaries, men and women who live to fight. He’s too old to use his old ship, Nell, but he sends Shad. And oh yeah — they have no money. All they can offer is food and shelter.

Shad meets Space Cowboy (Peppard), whose late shipment of guns comes too late, as Sador destroys his client’s planet. He agrees to take the weapons to Akir and teach the people how to fight.

There’s also Nestor, five clones who share a group mind. Actually, their whole race shares one mind, which makes life pretty boring. Therefore, they have volunteered to explore the galaxy and send back experiences to their homeworld. And then there’s Gelt (Robert Vaughn, The Man from U.N.C.L.E.), an assassin so wealthy and well-known that he can’t live a normal life any longer. He agrees to join up if he can live peacefully among the Akir people. The most meta thing ever is that Vaughn is basically playing the same exact role as he did when he was Lee in The Magnificent Seven. Finally, Saint Exmin (Sybil Danning, Howling 2, Malibu Express) demands to join the group for the glory of battle. Trivia: Danning would also appear in another remake of The Magnificent Seven, 1983’s Seven Magnificent Gladiators.

Nanelia is captured by a reptilian named Cayman (Morgan Woodward, Cool Hand Luke), who she recruits when she explains that they are battling Sador, the man who destroyed his home planet.

The seven return to Akir, where the natives treat them with distrust. Then, Sador attacks but his ground invasion is repelled and Gelt takes out plenty of his ships before being mortally wounded.

Sador sends all of his troops to destroy Akir, but the seven repel him at the cost of their lives. Only Shad and Nanelia survive, but he promises her that they will never be forgotten.

Battle Beyond the Stars was the most expensive film Roger Corman ever produced. The script by John Sayles is excellent, packed with pathos and inside jokes. And James Cameron created many of the effects in the film (he met producing partner and wife for a time Gale Anne Herd while working on the movie), effects that would be recycled in a number of future Corman productions.

Unlike Star Wars, there were no toys or sequels to follow. Only a View-Master set.

There was also a 2010 four-issue comic book series from Bluewater Graphics that showed how Zed had fought Sador before, along with an appearance by Cayman.

This is a big space opera that moves really quickly. It’s packed with crazy characters, awesome looking ships and huge battles. I was so upset at the ending when I was a kid that my mother had to rewrite it for me and I drew it based on our conversation. I couldn’t understand that Space Cowboy could make a brave sacrifice. He has to have survived!

Needless to say, this is one of my favorite movies of all time. Your mileage may vary, but just don’t tell me if you hate it. I’ll get sad.

UPDATE: You can now watch this for free with an Amazon Prime membership.

UPDATE 2: You can now get this movie from Shout! Factory complete with a Sybil Danning Saint-Exmin figure!

BONUS! You can also listen to the podcast that we did all about this movie right here!