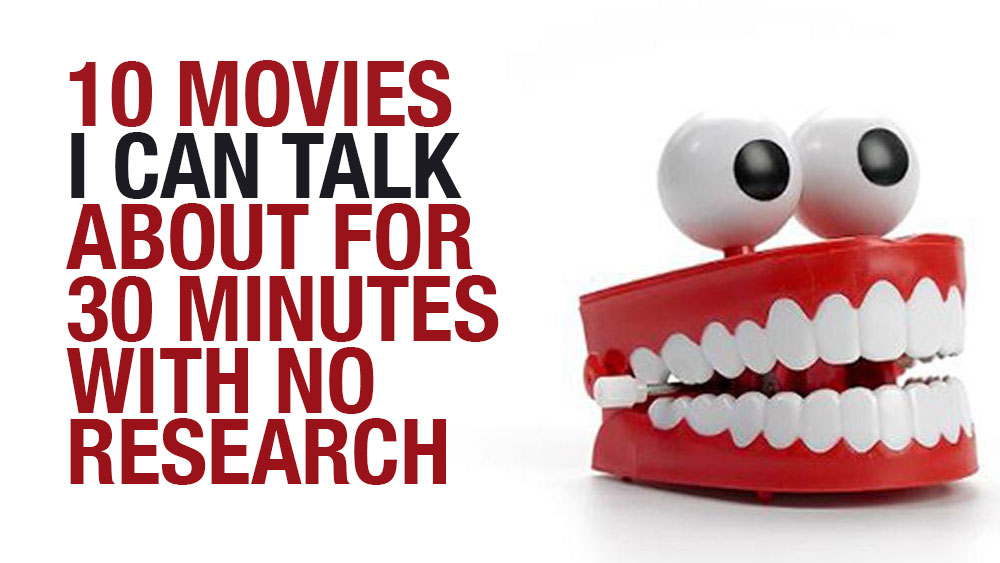 I saw a Twitter thread that asked, “What can I talk about for 30 minutes with no prep?” The answer, for me, is easy. Movies. Lots of movies. Get ready for 10 movies that I can, have and will go on and on and on about. 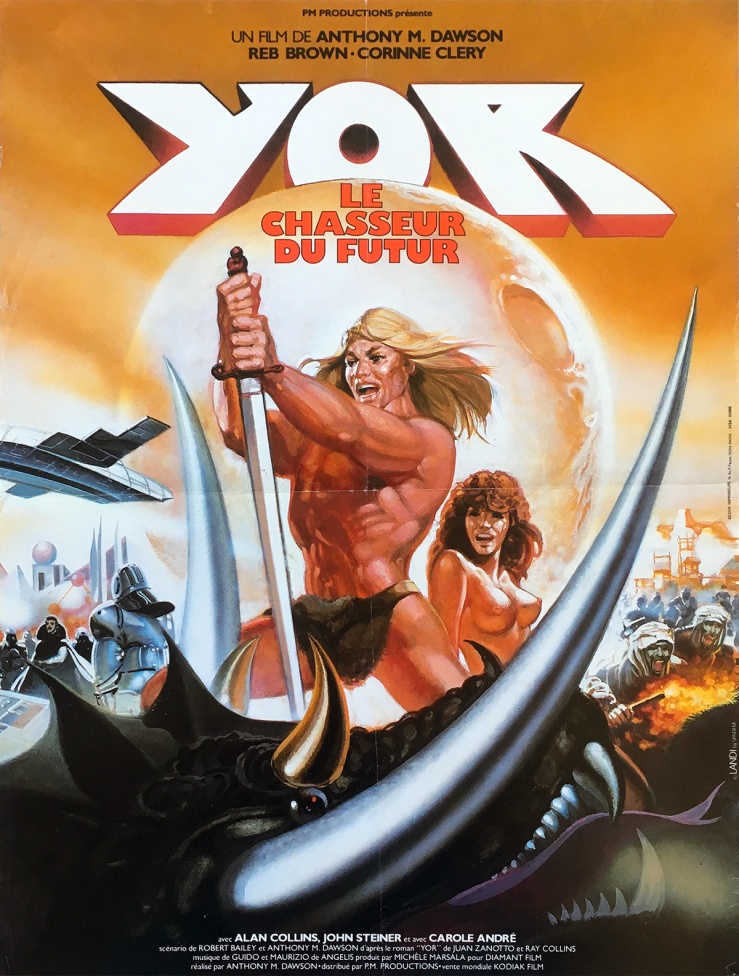 1. Yor Hunter from the Future: I basically started this site just so I could discuss this movie with more people. I’ve never seen a movie so colossally insane on so many levels that isn’t an art movie. Yor starts the movie by killing a stegosaurus, drinking its blood, proclaiming that it’s time to cut off the choice meats and then dooms an entire civilization — the first of many — through poor decisions and not paying attention. Once, I watched this movie six times in a row and went into a near drug-like state where I saw the face of several of the saints and martyrs. 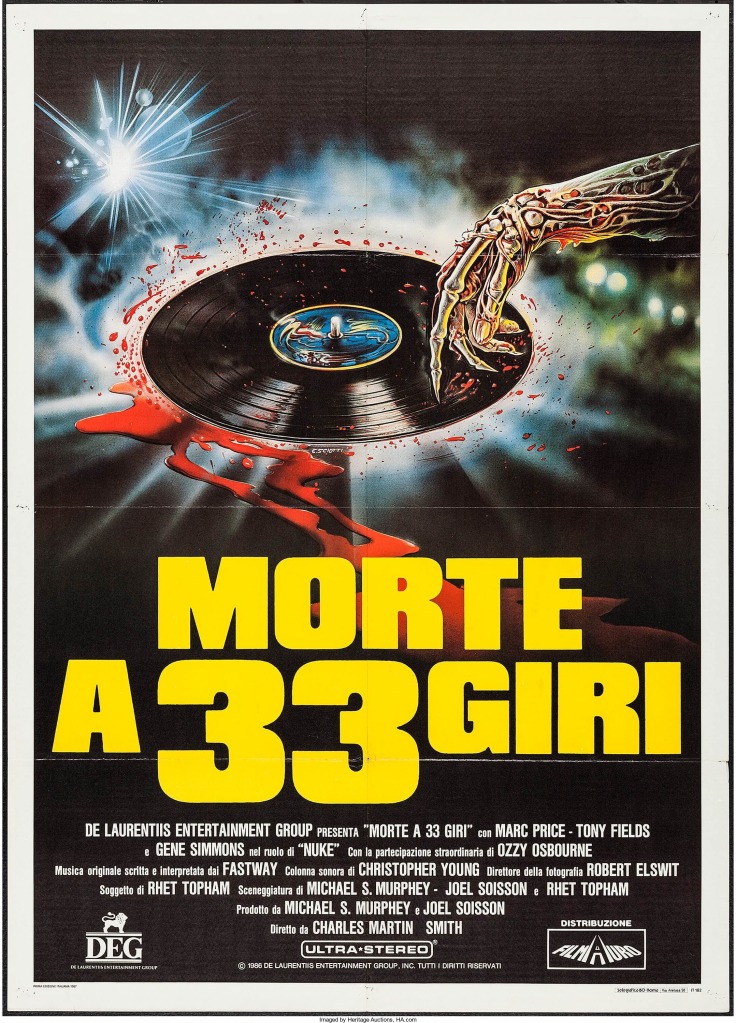 2. Trick or Treat: When people say, “That movie was totally heavy metal,” chances are they have no idea what the fuck they’re talking about. That’s because they haven’t seen this movie, a film that features Sammi Curr intoning, through backmasked messages to Skippy from Family Ties, “No false metal.” You know who wanted to become a rock star and come back to my old high school and use lasers fired out of my guitar to murder people at a concert? Me. You know who was the fat geek wishing Sammi Curr or Glenn Danzig or Henry Rollins would come fuck up his tormentors? Me. This movie is lived in, loved and forgotten by way too many. Seriously, get me started on this one and prepare for HOURS of theories on how great it is.

3. Conquest: To be fair, I could speak on nearly any Lucio Fulci movie for way more than half an hour. But Conquest is a special beast, a movie filled with non-stop fog, one willing to kill off its main character nearly off-screen and attempt to off its other hero with an undersea crucifixion before he’s saved by a pair of dolphins. You may wonder — is this really a Fulci movie? And then you realize it starts with werewolves ripping a woman into pieces. Also: it’s the only barbarian ripoff cycle film that I can think of that has its main villainess nude for nearly the entire running time.

4. Phenomena: Sure, Suspiria is amazing. I can discuss Tenebre at will. But if you want to hear me go deep, bring up this truly odd movie. It may take me half an hour to even summarize its plot: a school is haunted by killing when a girl who can control bugs — with a famous absent father — comes to study there, but she luckily makes friends with an old man who has a chimp that helps him solve crimes. Also: a boy with Marfan syndrome lives below an ancient mansion and eats children. It also begins with a girls head going through a window, just in case you thought that Dario Argento forgot that he made a pact with the devil to include just such a scene in every movie he’d ever make.

5. Amityville II: The Possession: This is the most Italian movie ever made in the U.S. and yes, I’m counting Contamination. It’s also filled with lunacy and grimness, presenting a world where a priest cares so little for his flock that he takes the phone off the hook before a ski trip and dispenses with the hints of incest most 70’s horror features to outright put it in your face. And in the midst of all this, poor Diane Franklin is beset on all sides by terror. Man, Diane Franklin features into nearly all of my cultural touchstones like The Last American Virgin. Better Off Dead, Bill & Ted’s Excellent Adventure and more, so I could do a half hour just on her.

6. Cathy’s Curse: This movie taught me that when kids get possessed in Canada, they tend to screw with old people, grow impolite and get potty mouths when their eyes aren’t glowing while they teleport all over the house and blow up vases. If I think about this movie any longer than thirty seconds, I get instantly excited about it and feel the urge to cold call random people and try to convince them to watch it.

7. Battle Beyond the Stars: Once I saw this movie, I realized that it was somehow even better than Star Wars, the movie that it’s ripping off. Did George Lucas have the vision to have John Saxon as a cyborg or Sybil Danning as a Valkyrie in a ship shaped like fallopian tubes? Nope. Nor did he have a group of aliens that eat a hot dog and psychically all taste it. And we haven’t even discussed George Peppard being in this pastiche of The Magnificent Seven. 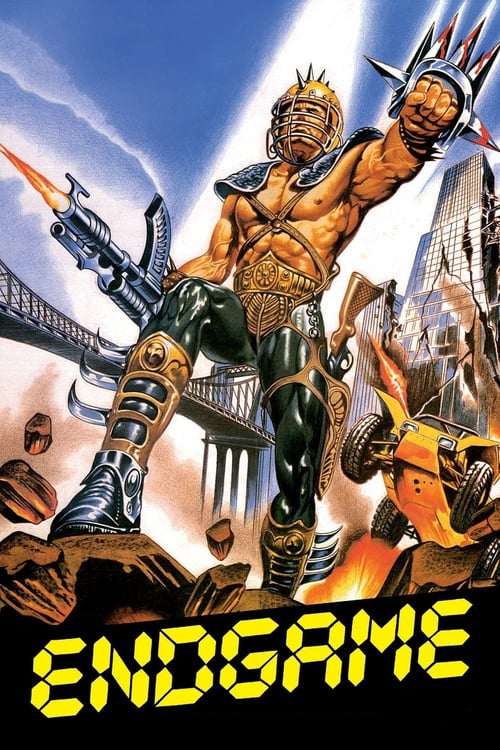 8. Endgame: In a better world, this Joe D’Amato movie would be out on blu ray and celebrated by trash film lovers. This way better than The Running Man film was made years before that movie and features scum movie saints Laura Gemser, Al Cliver and George Eastman in a tale of game shows, mutants and blind ninjas being controlled by a kid with mental abilities. Nine billion stars, Sam says check it out.

9. American Tiger: If you get into a conversation with me for long enough, we’ll probably try to sell one another on a movie that the other hasn’t seen. You may have seen every Sergio Martino movie, but chances are you haven’t seen this: a movie where a gymnast who pulls a rickshaw gets messed up with a televangelist warthog, his son’s sex games, murder and an ancient Asian sorceress. Bonus points for a shower sex scene where our hero leaves his jeans on!

10. Lemora: This is another movie that more people need to watch and get obsessed about. Cheryl Rainbeaux Smith stars as Lila Lee, a singing sensation in her church whose mobster father calls to see her one more time before he dies in the Lovecraftian town of Astaroth, which is filled with vampires. I can’t even believe that this is a real movie and I’ve watched it many times.

Certainly, there are many more movies that I could go on and on about. This site proves that. But these are the ones I feel like chatting about now. Want to know more? Let’s gab!