Count Yorga and  his servant Brudah have been revived by the supernatural Santa Ana winds. Sure, I mean, whatever it takes to get more of Yorga facing off with early 70s hippies, right?

This time around, Yorga is going after not just adults, but the children of an orphanage and their teacher Cynthia Nelson (Mariette Hartley). One of the students, Tommy, even watches as the brides of Yorga rise from a graveyard.

How bad does Yorga want her for his bride? Well, he sens is undead army after her entire family, tearing them apart and hypnotizing her into thinking they’ve left her in his care. Also, Yorga now doesn’t just have the disigured Brudah helping him, he also has a witch who can tell the future. And she believes that unless Cynthia isn’t killed or turned soon, she’ll be the death of her master.

This one is, if possible, even more bleak than the first film but still finds moments of humor, like Yorga watching The Vampire Lovers.

The ads for this film refer to Yorga as the Deathmaster. That would be the name of another Quarry-starring vampire movie, The Deathmaster, but it is not a Yorga sequel. There was a plan to make a third film in which Yorga would live in Los Angeles’s sewers with an army of undead homeless people.

American-International Pictures also considered a movie that would have had Count Yorga face Dr. Phibes. Instead, Quarry would play Phibes’ adversary in Dr. Phibes Rises Again. As it was, Quarry was pretty much Price’s enemy nearly every time they were in a movie together, just as much off-screen as on-screen. It was mainly because Quarry was AIP’s new horror star and Price’s contract was nearly up.

I love that this movie ends with nearly every character either dead or turned into a vampire; the hero has become the villain, the children are about to be consumed and Yorga’s curse keeps unliving. 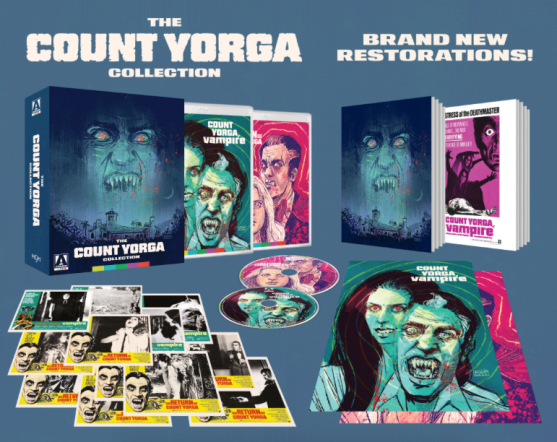 You can get it from MVD.