Born and raised in New York City, Steve James was born into an entertainment family. His dad was trumpet player Hubie James, his uncle was James Wall (Mr. Baxter on Captain Kangaroo) and his godfather was actor Jon Seneca, who often took him to 42nd Street to watch action movies.

James’ career started with stunt work in movies like The Wiz and The Warriors as well as small roles in The Land That Time Forgot, The Exterminator and He Knows You’re Alone and Vigilante. His big break came from Cannon, who cast him as Corporal Curtis Jackson in the American Ninja films, as well as roles in The Delta Force, Avenging Force, P.O.W. the Escape and  Hero and the Terror for Cannon.

He also crossed over from the action film genre and made stuff like Mask, Johnny Be Good, The Brother From Another Planet and by beng Kung Fu Joe in I’m Gonna Git You Sucka and its little-seen TV sequel Hammer, Slammer & Slade.

Sadly, James was often the second banana in his films but is always memorable. Even sadder, he died way too young at the age of 41 from pancreatic cancer. He was going to play Jax in the movie version of Mortal Kombat before his death and man, I can’t think of a cooler thing that could have happened.

There are two constants about James: everyone that worked with him speaks glowingly of him and Cannon fans absolutely love him. This movie is one of his few opportunities to be the lead and man, I wish we had received so many more. 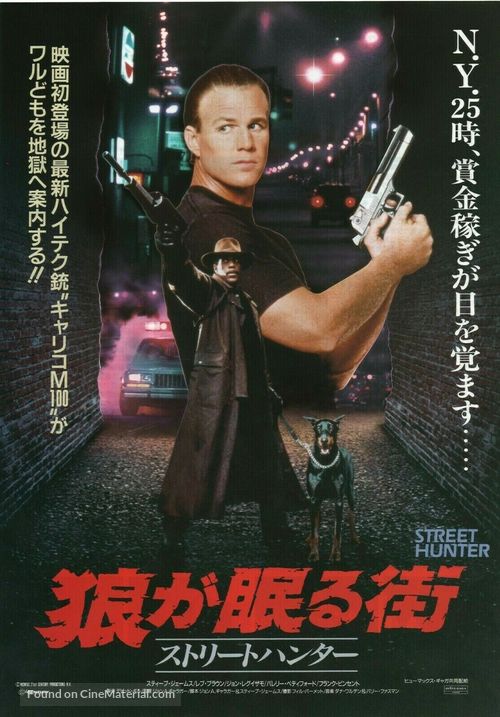 James is Logan Blade — has there every been a more 90s name? — a former cop turned bounty hunter. He was blamed for several crimes as a cop and cleared, but he never went back, because he’s a man of honor. Now all he has is a trailer and a dog named Munch, a girl named Denise (Valarie Pettiford who is almost fed up with him and, well, still a job to do.

That job is to stop Angel (John Leguizamo), who leads the Diablos in a street war against another gang, the Romanos. He has a weapon to help him do exactly that in the form of Col. Walsh (Reb Brown), who surgically strikes and takes out most of his rivals in the opening. He follows up being a worthwhile asset when he rescues Angels from being transported to prison after Blade catches him.

Reb Brown never got to be a bad guy all that often and that is also a shame. He’s great in this — actually he’s pretty great in everything he did — as he wants to start a new war in the U.S. because he never got to win in Vietnam. He’s pretty much the darkside Rambo, if Rambo constantly wanted to be compared to Alexander the Great and kept referencing historical warfare. He ever tries to bring Blade over to his side, but we know that these two have to fight to the death after he kidnaps Blade’s girl.

The Romanos are led by Frank Vincent as Don Mario Romano. Vincent is pretty much required if you make a mob movie, as he also appeared as BIlly Batts in Goodfellas the same year as this movie. He was also Phil Leotardo on The Sopranos and Frank Marino in Casino.

Another actor in this, Thom Christopher*, is pretty important to me, as he was Hawk on Buck Rogers.

Yet this entire movie is all about Steve James, who dresses like a western gunslinger with a long duster and cowboy hat, walking the mean streets of New York City wiping out bad guys. This is everything I’ve ever wanted for James and it’s — again that word — sad that this was the only Street Hunter movie when this could have been a direct-to-video series that went on for a long time.

James co-wrote this movie with its director, John A. Gallagher, who is still making movies today.

*Thanks to Andrew Chamen for helping me fix the typo on this name.