EDITOR’S NOTE: This movie has already appeared two times on our site with entries by Bill Van Ryn on February 13, 2021 and Eric Wrazen on February 15, 2021. Here are both their takes!

ABOUT THE AUTHOR: Bill Van Ryn is the creator of Groovy Doom and publisher and editor of Drive-In Asylum. I’m always so happy when he gets the opportunity to write something for us.

So let’s say you’re a kid in the later 1970s, and you’re really into watching scary movies on late night TV. You can’t get away with that very easily at home, but when you visit your grandparents on the weekend, they go to bed early and don’t really care if you stay up and watch TV. When you’re there, you try and see anything marked “-THRILLER” in the TV Guide. On one dark night Saturday night, you stay up late to watch a movie called Blood Mania. With a title like that, it’s going to be really scary, you just know it. The opening credits are a weird montage containing slow-motion shots of a woman in a nightgown running from some unidentified horror. This is interrupted by an animated piece where the word “BLOOD” – in large, gruesome red letters – is attacked by a pair of cartoon hands, which claw at the letters until they say “BLOOD MANIA”. There is a terrifying scream that makes your hair stand on end. You don’t realize it yet, but this movie has just shown you everything that is possibly of interest to an 8-year-old monster kid, and it won’t be very long before the TV is turned off and you’re asleep.

This may have been the experience of anybody who happened to watch “Blood Mania” as a child, because it’s one of the talkiest things you could hope to see. The shocks in the film are mostly of the daytime drama variety, so kids would probably check out of this movie very early on. This is probably a good thing too, because during the course of the story we are confronted with situations such as cheating on one’s romantic partner, a hopelessly dysfunctional family of estranged people, a woman who is willing to murder her invalid father for a little bit of money, a ruthless blackmail scheme, the use of amyl nitrate for kicks in bed, and repressed trauma linked to incestuous abuse.

Revisiting it as an adult, however, I appreciated it in a totally different way. Director Robert Vincent O’Neil (Angel, Wonder Women) finds an absolutely glacial pace for this movie, but it is such a visually compelling experience that you don’t seem to mind. Back in the days of turntables, sometimes you might have played one of your 45 rpm records on 33 1/3, just to hear what it would sound like slowed down, and “Blood Mania” is the visual equivalent of just that. I’m a sucker for any movie that emulates Bava’s colored lighting, but the set – a Los Angeles mansion that was once the home of Bela Lugosi – is just as wonderful.

Blood Mania was co-written by lead actor Peter Carpenter, one of two films (Point of Terror is the other) that were created by Carpenter with producer Chris Marconi.  Carpenter had been selected by Russ Meyer for a small role in Vixen! after Carpenter’s girlfriend included a photo with him as part of her audition materials. A role alongside Dyanne Thorne in 1970’s softcore drama Love Me Like I Do followed, and this two-film package with Marconi undoubtedly represented a bid for establishing himself as a working actor – a commodity, even. A career never manifested, and Carpenter disappeared. Despite rumors that he vanished because he died, he actually simply left the movie business, although he did pass away at the too-young age of 56.

Carpenter plays a shady doctor named Cooper, who is being blackmailed for providing illegal abortions. The sex-starved daughter of one of his patients offers to help him with his ‘tax problems’, and after he beds down with her to consummate the deal, she kills her father, expecting to inherit his estate. When her younger sister appears for the reading of their father’s will, however, things don’t turn out quite the way Victoria had hoped, and all three of their lives quickly begin to unravel.

Although made in the United States, Blood Mania sure does have the feel of a European film, in part because of its sumptuous look, but also because of its dreamlike atmosphere. Its horror film approach to soap opera material felt like a cheat the first time I saw it, but that’s what actually appealed to me in the long run. Like the Sisters of Mercy doing a Dolly Parton cover version, the result is something a little unexpected and marvelous. Although it does appear on Mill Creek compilations, there is also an incredible 2017 blu ray restoration by Vinegar Syndrome out there that blew my mind when I saw it.

Update: July 21, 2021: We’ve also previously reviewed Peter’s work in his forth and final film — which he, as with Blood Mania, wrote and produced — Point of Terror. And, thanks to frequent reader and uber Peter Carpenter fan, librarian Mike Perkins (thus his awesome research), we learned of this new blog entry from B&S About Movies’ friend Mike Justice, on his The Eerie Midnight Night Detective Agency blog regarding Peter Carpenter’s life and all-too-short career. Strap it on, it’s a great read.

And, surf over to this really cool Flickr posting from Mike Perkins, featuring early photos of Peter. And, there’s no stopping Mr. Perkins’s fandom, as he also honored Peter by not only having Peter’s IMDb page updated with correct information, he created an all-new Find A Grave entry for Peter. Did you know that Peter’s real name was Nathaniel Joseph? Or that he was in the Air Force? We do now, thanks to Mike Perkins’s hard work.

Yeah, we love our readers! Thanks for contributing to B&S About Movies, Mr. Perkins! (Yeah, we love you too, Justice.) And we love it when our readers reinforce and uplift our passions in honoring the actors and filmmakers of our youth. You gotta fight for the ’cause!

(From Wikipedia) Blood Mania is a 1970 American horror film written by Peter Carpenter and Tony Crechales and directed by Robert Vincent O’Neil, and starring Carpenter, Maria De Aragon, Vicki Peters, Reagan Wilson, Jacqueline Dalya, and Alex Rocco. The film stars Carpenter as a doctor whose mistress, an heiress, murders her terminally ill father to help him pay off a debt. 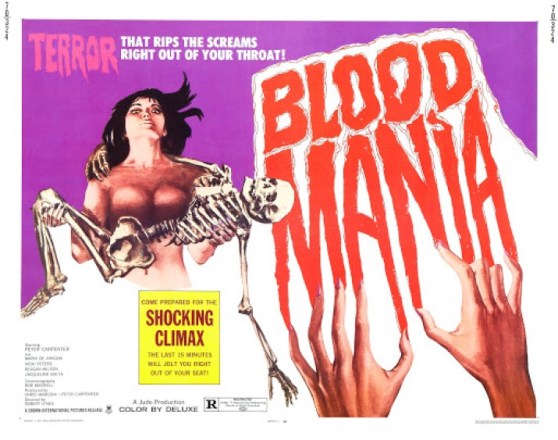 If there is one thing that can be said about Blood Mania, it’s that it’s a movie. 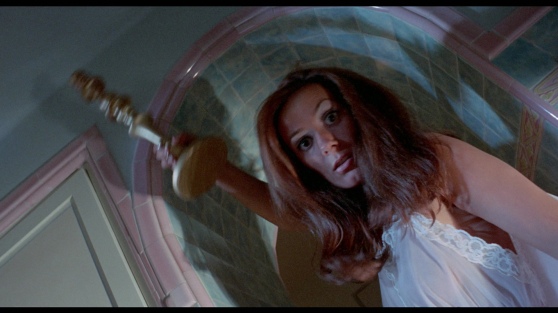 The opening sequence for Blood Mania is a freaky dream sequence depicting the stalking of a hippie babe in a peekaboo nightie over the sounds of a budget version of the Velvet Underground detuning and abusing their instruments. OK. So far so great!

Sadly, the rest of the movie doesn’t come anywhere near this level of freakiness and fun.

A more apt title for Blood Mania would have been “Worlds Dumbest Doctor” or possibly, “Victoria, The Crazy Bitch”. Either of these is a better indicator of the easy, sleazy melodrama you are about to witness.

Briefly (and without spoilers) Bloody Mania follows the sordid tale of Dr. Craig Cooper, one hunky hunk of burning physician as he beds babes of varying levels of wealth in order to bang his way out of a bad debt. Even this synopsis makes Bloody Mania sound more interesting than it actually is. In reality, this movie is closer to a soap opera with a little nudity thrown in to keep things sleazy. 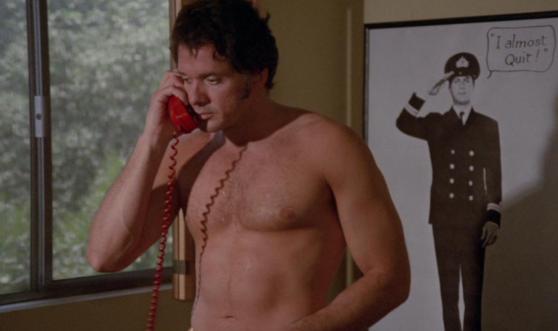 I feel that this movie would have been better pitched as a Russ Meyer or Doris Wishman style sexploitation flick. There’s plenty of sex and it includes a plethora of sexploitation’s favorite tropes like nymphomania, blackmail, abortion, lesbians, and drugs. It also uses a bunch of classic sexploitation tricks used to fill out the running time when there isn’t enough plot to fill 90 minutes. A fair portion of Blood Mania consists of people driving around, frolicking on the beach, or visiting an amusement park. This is the kind of movie that “fast forward” was invented for.

Blood Mania isn’t a good movie, nor is it a “so bad it’s good” movie. But it is a movie. And I guess for Mill Creek Entertainment – that counts for something.