Based on a short story about Nie Xiaoqian from Qing dynasty writer Pu Songling’s Strange Stories from a Chinese Studio and inspired by the 1960 Shaw Brothers movie The Enchanting Shadow, A Chinee Ghost Story inspired more than just two sequels, an animated film, a television series and a 2011 remake. It also created an entire genre of folklore ghost stories.

Its director, Ching Siu-tung, studied in the Eastern Drama Academy and trained in Northern Style Kung Fu for seven years. His father, Ching Gong, was a Shaw Brothers director. While producer Tsui Hark got most of the credit for these films, Siu-tung has done well for himself, also directing The Swordsman series of movies and choreographing House of Flying Daggers and Shaolin Soccer.

In the first film, tax collector Ning Choi-san (Leslie Cheung) fails at his job and must sleep in a deserted temple. There, he falls in love with Nip Siu-sin (Joey Wong), yet discovers in the morning that she is a ghost forever enslaved to a tree demoness. When Ning tries to save her and fails, her soul goes to the underworld.

This film is a gorgeous meditation on unrequited love. Even with the help of Taoist priest Yin Chik-ha (Wu Ma), the best our hero can do is secure a better afterlife for his one true love. 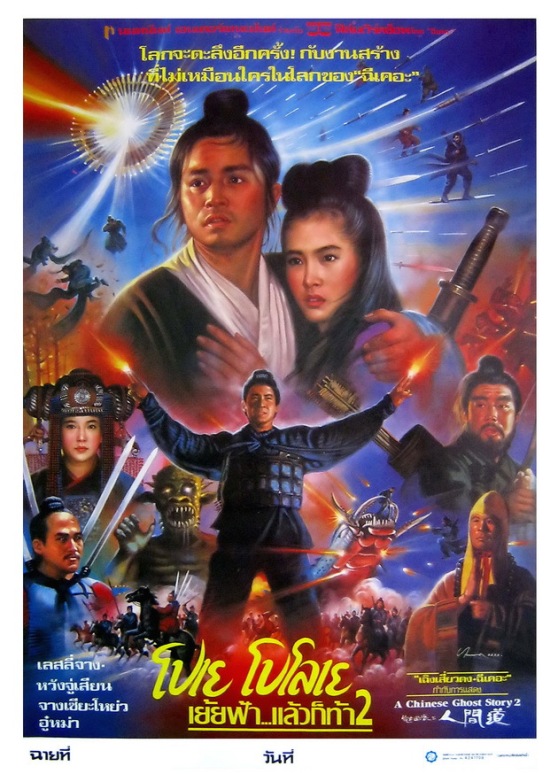 1990’s A Chinese Ghost Story II starts with Ning and Yin parting ways, with Ning heading back to his hometown that has been overrun with cannibals. After being jailed and condemned to die, an ancient scholar reveals that he has dug an escape tunnel. He gives Ning a book and a pendant, then shows him the way to freedom.

In this film, Ning joins with Autumn (Jacky Cheung) and the rebel sisters Windy (Joy Wong) and Moon (Michelle Reis) to battle a demon that has taken over a mansion. And by demon, a mean a gigantic centipede that requires fighters to separate the souls from their bodies to defeat it.

Recently, Apple pulled the theme song of this movie from the Apple Music Store, as it features a reference to the masscre at Tiananmen Square Massacre:

“The youth are angry, and heaven and earth are shedding tears,

How did the rivers and mountains become a sea of blood?

Why would Apple pull a song that rightfully condemns China for their role in killing protesters? Well, you know how money works. 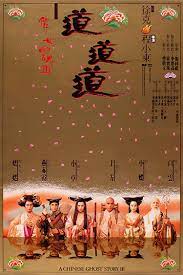 1991’s A Chinese Ghost Story III brings back the tree demon from the first film, a creature that is destined to return in a hundred years. This film is also about Monk Shi Fang (Tony Leung Chiu-Wai) and Swordsman Yin (Jacky Cheung), named after the original Taoist. The tree demon also has a ghost in its thrall, Lotus (Joey Wong).

This is the kind of movie where towers rise to block out all the sun on Earth and Shi Fang’s body is coated in his own golden blood, which allows him to channel the power of the Buddha to bring the sun back. Basically, things get nuts.

If you fall in love with these movies, remember that there was a cartoon and a 2011 remake to keep you watching.