Senti-Metal Movie Reviews believes that some things just belong together, like seafood and fine wine, pizza and beer, and of course… questionable B-movies and face-melting heavy metal!

A movie might have zero budget, bad acting, and terrible plotting, but just add a pounding metal soundtrack, and it magically becomes an instant party movie masterpiece!

From the description: Born in a tribe of fierce warrior women, Hundra has been raised to despise the influence of men. Hundra finds her family slain and takes a vow of revenge until one day she meets her match.

Hundra was an Italian-Spanish-American production co-written and directed by Matt Cimber, who went on to co-create and direct the Gorgeous Ladies of Wrestling (GLOW) television series. Mr. Cimber definitely seems to have an interest in ass-kicking amazons, because a large portion of Hundra’s running time is dedicated to Hundra (played by the statuesque Laurene Landon) partaking in various forms of ass-kicking combat. 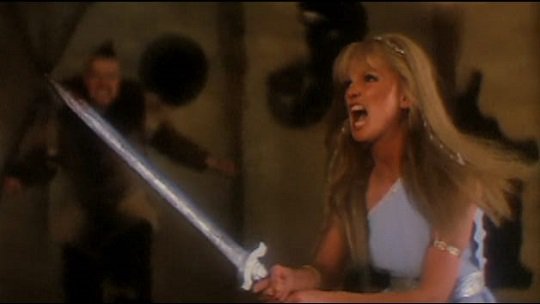 Hundra is the classic tale of an amazon warrior out to get revenge for the slaughter of her “women only” tribe, and also get pregnant in order to repopulate said tribe. And if you think

these sound like conflicting goals…. You would be right.

Therein lies the conundrum of Hunrda… finding that subtle balance between copulating with men to save your race whilst also ruthlessly killing as many men as you can lay your hands, legs, sword, spear, daggers, and arrows on.

Note: I cannot think of a better Metal pairing for Hundra than the classic album Metal Priestess by Wendy O Williams and the Plasmatics. Let’s face it, Wendy O could have literally played Hundra in this movie, and she could have even brought her own wardrobe! 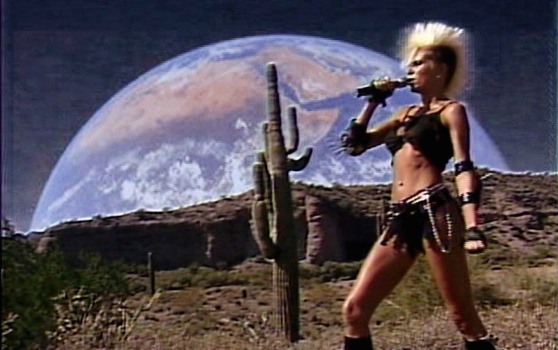 The driving force of the movie is the action scenes of Hundra battling various hordes of bumbling men… and a good few of these scenes are played for laughs as much as action. It is worth noting that Laurene Landon apparently did all her own stunts in Hundra, which is pretty damn impressive.

Anytime Hundra gets physical (and this happens a lot) is a good time to jump to the next track in the Metal Priestess album, which kicks as much ass as Hundra herself.

Overall, Hundra is a fun sword and sandal epic with a sorta feminist twist, and I have to stress the “sorta”. While it’s fairly clear from the outset that Hundra will prevail in her quest, there are still quite a few scenes in this movie that were a little too “rapey” for my tastes. I have a feeling that Mr. Cimber may have been using John Norman’s “Gor” books as source material for Hundra because I found a little too much of male dominance / female submission in the overall tone of the film.

So, aside from those uncomfortable moments, Hundra moves at a pretty good pace and if you, like Mr. Cimber, have an eye for “wrasslin’ she babes”, then Hundra is definitely the movie for you!

Note: Both the movie and the Senti-Metal Soundtrack can be found on YouTube: