I’ve had this movie for some time. Hell, I have a beta of this movie. But sometimes, I save Italian movies for when I need them most. Because for some reason, I worry that they are a finite source of escape from this world and I don’t want to use up all the water in my canteen as I stare out across that uncaring desert of reality.

Have I ever gone off and told you how much I love Ruggero Deodato? Oh, yeah. I totally have. Well, here he’s remaking The Last House on the Left and going so far to just have David Hess play Krug all over again*, except this time he’s called Alex.

Deodato shot exteriors in New York City and interiors in Rome’s Incir De Paolis Studios. It starts with Alex pulling over a young woman who he soon assaults and murders. To make you feel even queasier about that scene, I’ll let you know that she’s played by his wife at the time, Karoline Mardeck.

After putting her locket into his trophy case, Alex and Ricky (Giovanni Lombardo Radice, City of the Living Dead, Stage Fright) are closing up the underground garage where they work when a Cadillac driven by Tom (Christian Borromeo, Tenebre) and Lisa (Annie Belle, Forever Emmanuelle, Absurd). After Ricky fixes their car, they invite the antagonists to a party. Alex walks to his locker and grabs a straight razor.

They arrive at the home of Gloria (Lorraine De Selle, Emanuelle in America) and the party begins, along with guests Glenda (Marie Claude Joseph, who was only in the one film) and Howard (Gabriele Di Giulio). Alex realizes quickly that he and his friend are only there to be made fun of, as the rich partygoers encourage Ricky to drink. Alex takes Lisa upstairs but she teases him to the point of blue balled madness. As he comes back to the party, he realizes they are cheating Ricky at poker, so he beats Howard into oblivion, throws him in a pool and relieves himself all over him.

Alex has his way with all of the women, one at a time, when he’s not slicing up the faces of the men. Gloria tries to seduce Ricky in the hopes of getting him on her side, but when they return to the rest of the party, Alex is slicing an innocent neighbor named Cindy (Brigitte Petronio, Emanuelle Around the World) into pieces. When Ricky tries to stop him, Alex turns the razor on his friend.

Tom grabs a gun and blasts Alex repeatedly, including a bullet directly to the groin. He falls into the pool and in an inverse of the way Howard was treated, the victim destroys his victimizer with a bullet to the head. As they go to call the police, Tom says that despite some mistakes, it worked out for the best. It turns out this Alex’s victim was his sister and this was all a ruse to kill him and get away with it. To make it even more upsetting, Tom mentions how exciting it must have been for her.

A section 1 Video Nasty, House on the Edge of the Park is not an easy watch. It’s a scummier version of Craven’s film, which may not seem to many like it is possible. I’m glad I waited so long to watch this, because it’s not a movie that will leave me quickly. Deodato makes a film that continually assaults not just the characters, but the audience, who remain spellbound by the performances.

* The filmmakers wanted Hess so much, supposedly they gave him half of the film’s rights. 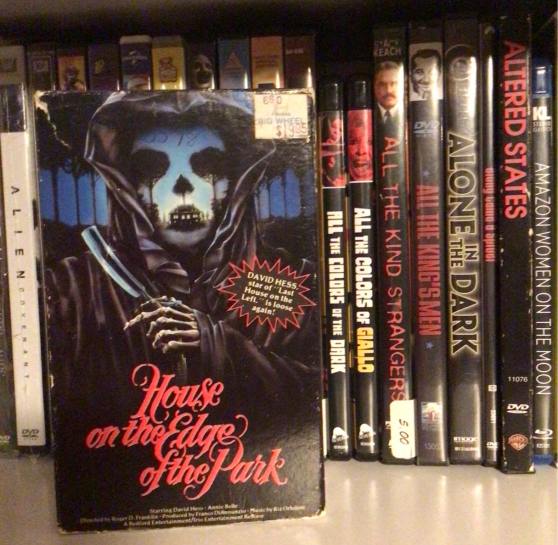