Al Filo del Hacha, or Edge of the Axe, is a very late in the slasher game film directed by José Ramón Larraz, who also directed Estigma, a movie that I’ve been obsessed with for some time. Other films from him include Symptoms, Vampyres and The House That Vanished, which was also released under the titles Scream… and Die!, Please! Don’t Go in the Bedroom, Psycho Sex Fiend and Psycho Sex. The posters for that movie are great, as they shamelessly steal from The Last House on the Left’s ad campaign.

The crazy thing about this film is that it’s set in the rural Northern California mountain community of Paddock County, yet it’s a mixture of scenes shot in Big Bear Lake, California and Madrid, Spain. Most of the exteriors are in the U.S., while the interiors are a world away. For example, the car wash killing that starts the movie is split, with the signage and cars in America and the actual killing in Spain. It’s a seamless transition, which makes it even more interesting.

Before the credits even roll, nurse Mirna Dobson dies at, well, the edge of the axe at the aforementioned car wash. Just from this first incredibly shot scene, you realize that this is anything more than your basic stalk and slash.

Our hero is Gerald Martin (Barton Falkes, Future-Kill), whose cabin is filled with computers and video games, in direct contrast to the natural world all around him. This puts him at odds with his landlord, a hermit named Brock.

Gerald hangs out with Richard Simmons — no, not the guy who danced with the oldies, but instead a wanna-be lady killer — who works as an exterminator when he’s not acting as a kept husband to his much older wife. He’s played by Page Moseley, who was in Girls Nite Out, Open House and The Jigsaw Murders. And his much older wife? None other than Patty Shepard, who was Hannah Queen of the Vampires and appears in Assignment: Terror, The Werewolf vs. The Vampire Woman, and Slugs).

Gerald and Richard check out the smell coming out of a bar, which ends up being the corpse of one of the barmaids, who it appears has killed herself. As this is a small town, the police ask them to keep it quiet, kind of like how they ignored someone slaughtering pigs and leaving their heads in the bed, as if these California farmers were Jack Woltz.

Paddock County is a lot like my hometown. All that’s there are bars. Lillian Nebbs is the daughter of the owner of another of those many bars and she’s home from school. She loves technology and video games as much as Gerald, which makes this movie into some sort of science fiction story. Of course, she does wonder why he has a list of all of the dead women on his computer. He replies that he loves making lists of data, you know, as you do.

This is one of my favorite tropes of all movies — a computer that does more than computers in 1988 were actually able to do. This is a pre-Siri world, but the personal computers in this movie are able to speak in a very understandable voice. Trust me — I had a computer in 1988. It was a six-year-old Commodore 64 that took an entire evening to download less than a megabyte of info.

The killings haven’t stopped, as Rita Miller (Alicia Moro, Exterminators of the Year 3000, Slugs) is stalked and killed by someone she seems to recognize before her body is placed on the train tracks and torn asunder. Poor Rita — she has the best slash job I’ve heard of: beautician/prostitute.

This finally puts Officer Frank on the case. He’s just in time, because the farmer’s wife who found the pig’s head is killed and Richard finds the severed head of a nurse while out on the lake cheating with his wife. And oh yeah — yet another woman finds her dog murdered before the killer chops her fingers off and then chops her to bits.

Lillian tells Gerald her family secret — her cousin Charlie has just been released from a mental hospital. And he was there because she pushed him off a swing set and caused the injury. She feels that he’s the one behind the killings. She uses his computer to do research, attempting to learn more about the psychiatrists who treated Charlie.

At the scene, the cops find a pin from the Lillian’s father’s tavern — the same one she pinned on Gerland at one point — which leads them to question her and her father.

So who is the killer, in this movie that feels just as much American/Spanish backwoods giallo as slasher?

Lillian accuses Gerald of being Charlie, which seems like a stretch. He responds by telling her that she is Charlie, as he’s learned that she had a head injury at one point and spent plenty of time in the hospital. It also turns out that all of the victims were either people who cared for her or women interested in her father. So Lillian attacks Gerald with an axe.

As the two fight, the cops arrive and shoot our hero. As Officer Frank tries to help Lillian, we notice that she’s smiling like a maniac. 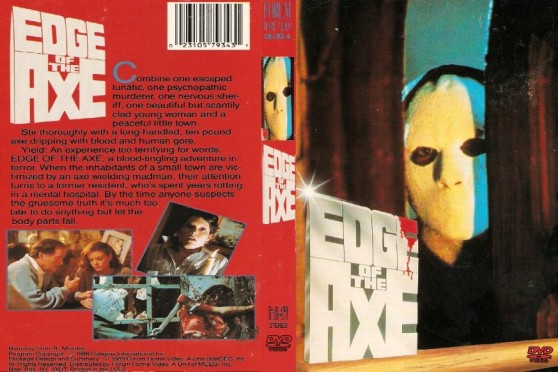 Larraz considered Edge of the Axe his worst feature film, but it has more quality in it than ten slashers. Seriously, I’ve been holding off watching this for a while, as I had always loved its poster art and felt it could never live up to it. Good news. If anything, it exceeds it.

Unlike most slashers, which are content to ape from Halloween and Friday the 13th, this film spends more time making us care about every character, even the side ones like Richard’s wife. This isn’t kids in the woods screwing around, making us count the seconds until they’re decimated. These are real people caught up in the web of a killing machine.

The killings themselves are bursts of the unreal that intrude upon the problems that all of these characters face — money woes, marital infidelity, family secrets — and that makes each of the very creative death scenes even more effective.

There’s a new Arrow Video blu ray release of this movie, which features a beautiful 2K restoration from the original camera negative. You can choose to watch this in English or Spanish (which also has newly translated English subtitles). There’s also commentary by lead actor Faulks and The Hysteria Continues podcast. Plus, there are interviews with Faulks and make-up artist Colin Arthur.

You can buy this from Arrow Video.

DISCLAIMER: This movie was sent to us by Arrow Video.