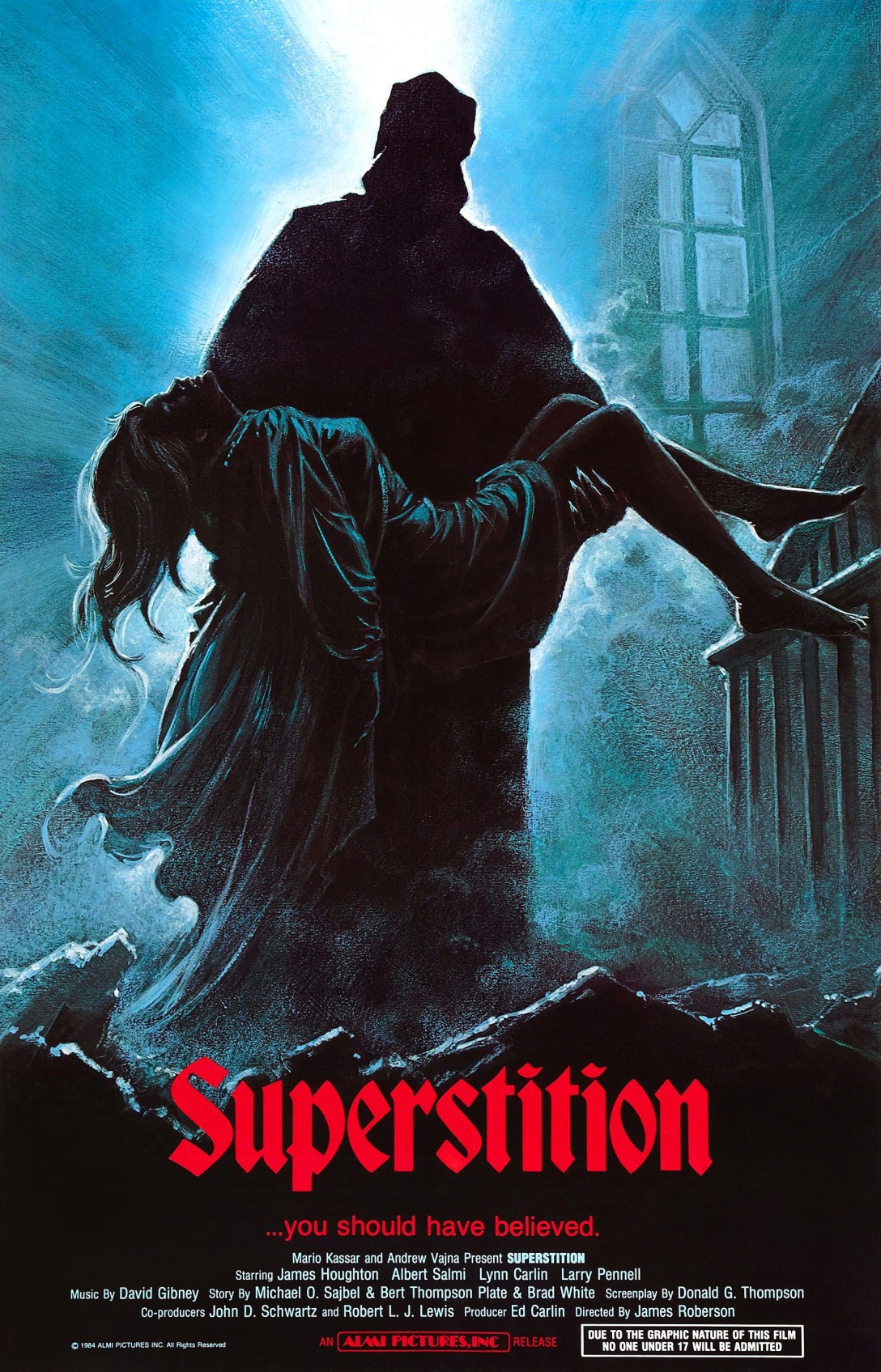 For years, Superstition was a movie that was impossible to find. The 2006 Anchor Bay release was out of print and you could only find bootlegs of the film at conventions. That’s just part of this movie’s troubled history, as even though it was finished in 1981, it wasn’t released in the U.S. until 1985.

That’s probably why when people bring up great 80’s horror, this is a film that rarely enters the conversation. That’s changing, thanks to Shout! Factory finally bringing this odd film out on blu ray.

Filmed under the title The Witch, Superstition is all about murder. Violent, slasher-like murders filled with brutal amounts of blood-spraying gore. This is a movie that does more than not care about its characters. It seems to outright despise them, reveling in their horrible destruction. That makes it stand out from the pack of Amityville Horror and Poltergeist films. Much like Umberto Lenzi’s Ghosthouse, it melds the world of the slasher with the supernatural.

It all starts when two boys play pranks on a couple parked on lover’s lane. As they hide inside an abandoned house, they’re soon dispatched, which brings Inspector Sturgess (Albert Salmi, Viva Knievel!) and Reverend David Thompson (James Houghton, TV’s Knot’s Landing) in to investigate. Sturgess believes that the house is a place where occult rituals are taking place, as more than one murder and several drowings have happened on the estate.

What follows is a brutal series of kills, such as Sturgess’ partner being dragged under the lake, an elderly priest (Stacy Keach Sr., father of Stacy and James) being killed by a table saw, a contractor being hung by a clawed hand, exploding shards of glass mutilating another priest and so much more. Don’t fall in love with a single character in this movie — man, woman or even child.

Everything can be traced way back to a witch trial that happened in 1692, during when Elondra Sharack was accused of murdering a nine-year-old girl named Mary. The witch was drowned and then the church nearby instantly burned down. So when young Mary’s ghost starts wandering thr grounds, nothing good can happen.   By the end, not even a crucifix can stop the witch from killing anyone and everyone that crosses her path.

Look for Larry Pennell — Dash Riprock from The Beverly Hillbillies — as doomed priest George Leahy, who somehow has a wife and three kids, one of whom is played by Billy Jayne, who is also Billy Jacoby, brother of actors Robert Jayne, Susan Jayne and Laura Jacoby, as well as the half-brother of Scott “Bad Ronald” Jacoby. Billy is also in Bloody Birthday, The Beastmaster and Cujo.

Director James W. Roberson has a great eye for setting up all this carnage. You’ve seen his work before, as he was the cinematographer for The Town That Dreaded Sundown, Encounter with the Unknown and Terror On Tour.

While not an official sequel, Alessandro Capone’s 1989 film Witch Story was also sold as Superstition 2. That makes sense, as thematically these movies are incredibly similar. However, in Germany, Witch Story was retitled Tanz der Hexen Teil 2 and sold as the sequel to Larry Cohen’s Wicked Stepmother, a movie that feels like a complete 180 from Capone’s attempt at making a haunted house film.