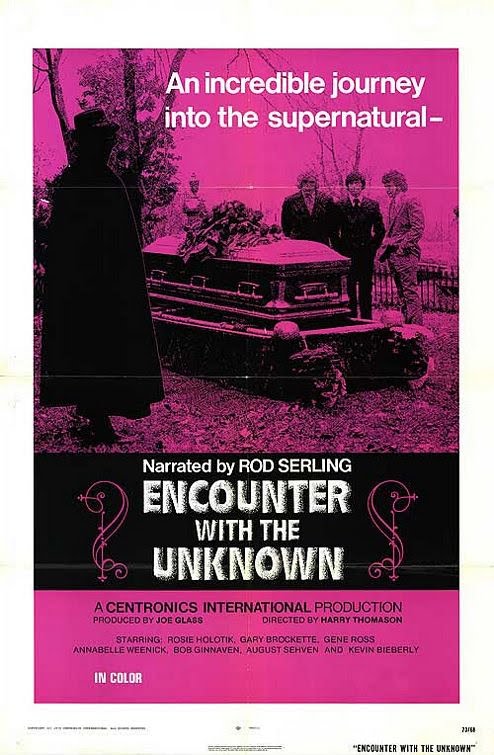 Harry Thomason and his wife, Linda Bloodworth-Thomason created TV’s Designing Women and were a 1990’s power couple, playing a major role in getting President Bill Clinton elected. But way before that, he wrote and directed this Rod Serling narrated film.

This movie presents its tales as true, set up by not one narrator, but two. Yes, Rod Serling was not enough. Let that sink in.

“The Heptagon” starts at the funeral of a college student. It turns out that three guys all played a prank that led to his death. A curse from his mother — the seventh daughter of a seventh son — leads to every one of them dying.

“The Darkness” is about a boy’s dog disappearing into a hole to hell and his father going insane after he tries to visit the hole. This feels like a retelling of the Shaver mysteries (see our review of Beyond Lemuria to learn more), although one possibly insane IMDB reviewer claims that they’ve been to the actual hole. There’s also an IMDB review of the film from the voice of the hole itself! Does this have something to do with the voices from Hell that have been proven to be audio from Baron Blood?

Finally, “The Girl on the Bridge” retells the urban legend “The Vanishing Hitchhiker,” which has variations all over the country (check out this North Carolina one). Rosie Holotik from Horror High and Don’t Look in the Basement plays the title character, which takes this movie up several letter grades.

The end of the film feels like it keeps wrapping everything up, only to take us back to the beginning and tell it all again. It’s a really strange narrative device that probably was the only way that this movie got to a long enough running time to play in drive-ins.

This film is an odd duck. It’s so awesome in parts and so bad in others. Serling’s voice is perfect, but you can tell he had nothing to do with the writing. And yet, it all feels like something you’d love to watch all fucked up at a drive-in around 3 AM. So, you know, this would be a definite recommendation.

Thomason would follow this up with The Great Lester Boggs, a motorcycle film featuring ex-football player Alex Karras as a cop, The Day It Came to Earth and Revenge of Bigfoot, which starred Motel Hell‘s Rory Calhoun. Then, after writing and producing for The Fall Guy, he started moving in much more powerful circles.

If you want to see this for yourself, Diabolik DVD has the Code Red blu-ray that combines this film with Sasquatch. Or you can watch it for free on Amazon Prime.