I always wondered: Could Dan Haggerty and Linda Blair be in the same film someday? Happily, I can report that 1989’s The Chilling — also known as Gamma 693 and The Thawing — exists.

Should you watch it? That depends. Have you seen Return of the Living Dead and always wanted someone to make a way worse version of it, but also confuse the plot with the moral dilemma as to whether freezing someone after death is right or wrong? Then good news! This one has you covered!

You have to love a movie that starts with this initial scroll: 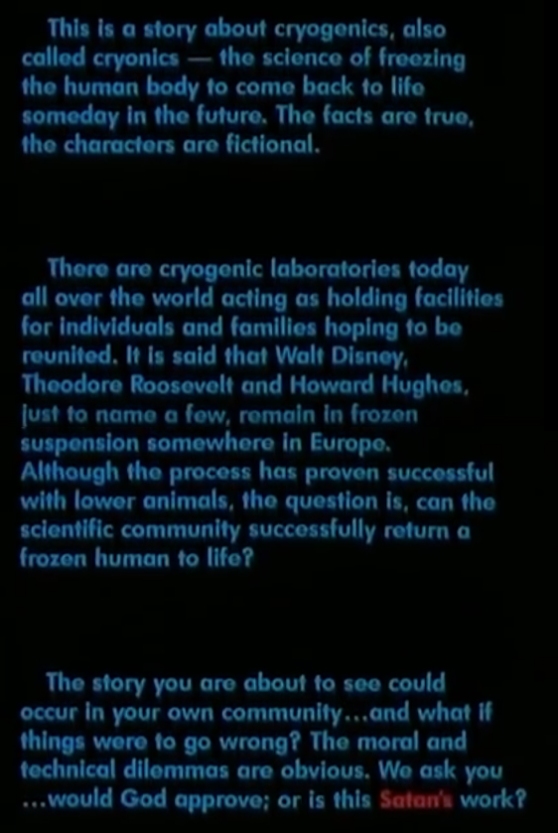 Universal Cryogenics is a successful business, freezing the recently dead until science can revive and cure them. The only problem is, once the power goes out in a storm, the frozen dead rise from their coolers and turn into zombies.

Who’s to blame? Dr. Miller (Troy Donahue, yes, the former 1950’s sex symbol who was also Hatchet’s dad from Cry-Baby), who has been harvesting organs and selling them Mexican clients.

Only his secretary (Linda Blair, who seems to play as many secretaries as she wears large thick belts) and client Joseph Davenport can save the day. Or maybe save themselves. Luckily, they have Sergeant Vince Marlow, played by Haggerty, backing them up.

Co-directors Deland Nuse (Return of the Boogeyman) and Jack A. Sunseri (who produced The Dead Pit) really have a lot to answer for. The effects are abysmal. And at the end, it just feels like everyone gives in and this becomes a comedy.

After all, in the closing credits, we learn that Joe Sr. and Blair’s character have gotten married and have a son named Joe Jr., while the thuggish Joe Jr. becomes the leader of the zombies — sorry, cynoids — that live in the Kansas City sewers. Dan Hagerty’s character Vince has a black and white flashback to the death, rebirth and second death of his best friend before moving to the mountains of Colorado with Luke the dog and his pet bear, who we assume is named Ben. And then there’s a shot of a zombie limo driver for no reason before five minutes of long credits.

That said, I never thought I’d see a movie where Troy Donahue uses a sword to cut a zombie’s head off. And there’s one dialogue scene where Haggerty has a conversation with Linda where he laments that he won’t be able to dress up like Freddy Kreuger.

Honestly, watch it for yourself. It’s still not the best movie Dan Haggerty has been in, however. But man, I could talk about Elves all day.