This movie is one crazy mix-up of a bunch of other movies that you may love, all in one easy to gulp down cocktail. Take some Hammer mood, squeeze in some modern gothic, a pinch of Psycho, rip off the motorcycle scene from The Great Escape, throw in some nukes and boom — you have It!

After a London museum warehouse burns down leaving behind the Golem of Judah Loew and the dead body of the museum’s curator. His assistant, Arthur Pimm (Roddy McDowall), takes a big interest in the golem, figuring out that it’s the key to getting what he wants out of life.

That Arthur — what a character. He keeps his mom’s dead body in his apartment and steals jewels from the museum for her to wear. And he learns how to use the golem for murder, when all it wants to do is defend its Jewish community.

After the catastrophic destruction of Hammersmith Bridge, which Pimm has already told his love interest, Ellen Grove, that he could do, he tries to destroy the golem. Guess he didn’t read any of the fine print inscribed into the clay monster that says that it can’t be destroyed by fire, water, force or anything man has created.

Ellen eventually falls for another man, Jim Perkins of the New York Museum, who also wants to take the golem away. He turns in Pimm to the police, who then commit him to a sanitarium. He breaks out with the help of the golem and kidnaps Ellen. Luckily, the hero saves the day just before a nuclear explosion wipes Pimm out of existence (let’s be fair, everybody within a few thousand miles is going to get radiation poisoning, but this was the 1960’s and horror movie science). The golem? He’s fine. He just walks into the sea to go away from awhile, Godzilla style.

Man, I love the way the golem looks in this movie. Pre-CGI monsters are always awesome. Just look at this guy! He looks scary as heck! 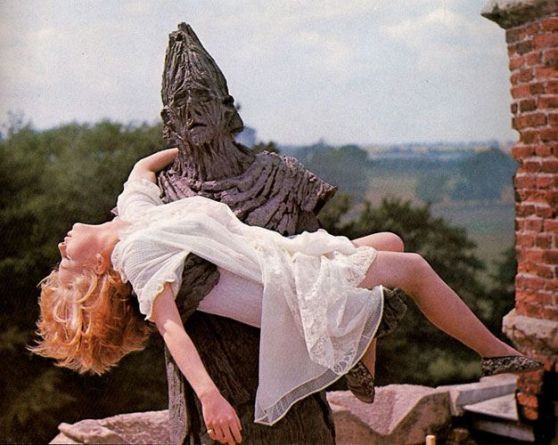 Even though it was shot in color, the U.S. version is in black and white! Say what? It’s also the screen debut of Ian McCulloch, who always pleases the couch audience in our house in films like Zombie and Contamination.

Want to watch this for yourself? The guys from New Castle After Dark posted it to YouTube!