Dr. Otto Frankenstein works in his lab all day and to the normal daytime world, he seems like an ordinary doctor. But at night, he works on perfecting his own form of life, Mosiac, putting together this inhuman human from several dead bodies. Then, once completed, Mosiac repays him by killing him and we still have an hour left.

Directed by Mario Mancini (who was the cinematographer for Frankenstein’s Castle of Freaks and The Girl in Room 2A), this is a film featuring real surgical footage, nonsensical dialogue and a total lack of plot. Suffice to say I loved it.

Mosiac spends the rest of the movie replacing his constantly failing organs, which means that he must murder and murder and murder some more. Have you ever wondered, “What if someone used a giant leg bone to kill someone?” this would be the movie that answers your inquest.

Also, in whatever nameless city in some unknown country that this is supposed to be set in, possibly Germany, the women in the night have no issues with a gigantic monster in a leather Nazi-esque outfit picking them up with merely a few grunts. No money discussion — he kills them way before they tell him how much a half and half costs.

This movie was inspired by Italian horror, sex and gore comics, like Oltretomba. If you’re offended by the blood and guts and books of this film, consider this a stern warning: avoid these comics at all costs. They take it even further. And then further. And then some.

There’s a new blu ray of this that’s been released — the film is in public domain — that finally fixes the rough prints that are out there right now. It’s nearly impossible to find, but that doesn’t mean I’m going to stop looking. For all the foibles of this film, it has a certain something.

As a bonus, here’s some artwork that I did of the film. 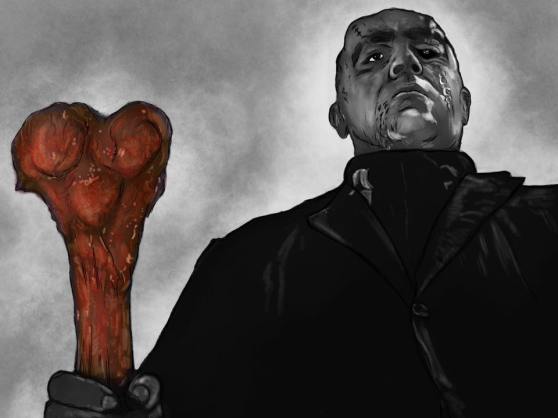