Also known as Stranger in Our House, Summer of Fear is based on Lois Duncan’s 1976 young adult novel. Duncan also wrote the books that the movies I Know What You Did Last Summer and Killing Mr. Griffin were based on.

Originally airing on October 31, 1978 on NBC, this Wes Craven-directed film is all about Julia (Lee Purcell, Necromancy), who has lost her parents and housekeeper to a car crash. Her aunt Leslie (Carol Lawrence, ex-wife of Robert Goulet), uncle Tom (Jeremy Slate, The Dead Pit) and their kids Peter (Jeff East, the teenage Superman in the 1977 film), Bobby and Rachel (Linda Blair!). Rachel and Julie quickly become friends, which helps Julie escape her shyness and even get a makeover.

You know who doesn’t like Julia? Rachel’s horse Sundance. But everyone else seems to love her. However, stuff just doesn’t add up. Like why does she have human teeth in her room? Why did she steal a photo of Rachel, who suddenly gets hives (poor Linda, always having to be in makeup)? Why doesn’t she have a reflection? And oh yeah, why does she get away with stealing Rachel’s boyfriend Mike (Jeff McCracken, who wrote his own Wikipedia page obviously)?

To say that Rachel’s life turns into shit is putting it mildly. She loses her boyfriend. She loses her best friend (a young Fran Drescher). She loses her horse, which flips out in competition and needs to be put to sleep. And she even nearly loses her one confidant, Professor Jarvis (the man once known as the King of the B’s, Macdonald Carey), who believes her when she says that Rachel is into black magic. Oh, it gets worse. Julia is planning on getting with her father and killing her mother!

Of course, everything works out well and it’s revealed that Julia was really Sarah, the housekeeper. But perhaps more frightening is the fact that she survives another accident and becomes a nanny in a new household. Her evil isn’t finished yet. 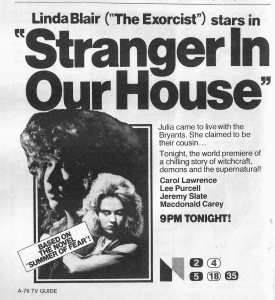 This is a slow burner, but once the occult madness kicks in, it gets pretty fun. Then again, I’m a sucker for Linda Blair. Made a year after The Hills Have Eyes, it fits well into the 1970’s TV movie milieu.

After playing on NBC and CBS, this film was sold theatrically to Europe, where it got the title Summer of Fear. It was re-released in 2017 by Doppelganger Releasing.

You can also watch the entire movie hosted by the guys from New Castle After Dark right here.

One thought on “GRANDSON OF MADE FOR TV MOVIE WEEK: Summer of Fear (1978)”