On March 7, 1983, ABC presented this slasher movie of sorts that’s packed with plenty of great talent and enough twists to get you from commercial break to commercial break. 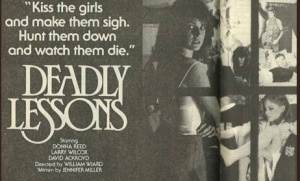 Stephanie Aggiston (Diane Franklin, Better Off Dead, Amityville II: The Possession) is spending the summer at Starkweather Hall, a rich girl’s boarding school. She’s a simple young lady, so she doesn’t fit in at first, but soon makes friends with Marita (Ally Sheedy), Calli and Shama, her Saudi princess roommate.

Everything seems to be going well until the murders start. Detective Russ Kemper comes to investigate and you know he’s a cop, because Larry Wilcox (Jon from CHiPs) plays him. Instead of waiting to learn who the killer is, Stephanie decides to play investigator with the help of stable boy Eddie Fox (Bill Paxton).

This movie is packed with red herrings, like the school janitor who thinks that Marita’s mother was his daughter. But the truth? It’s the cop! His mother, headmistress Miss Wade (Donna Reed!) abandoned him as a child. Therefore, he’s going to take away the lives of these girls that she loves and ruin her school.

Written by Jennifer Miller (who brought The Dark Secret of Harvest Home to TV) and directed by TV movie master William Wiard (This House Possessed, Fantasies), this is a fine way to pass some time and play spot the future star.

It’s not available on DVD, so visit YouTube or your favorite gray market source.