America. The late 70s. It was a very different time and place, to be sure. Fuel was scarce. Crime wasn’t. We weren’t yet in the grip of the 1980s Satanic Panic, but thanks to Manson, Son of Sam and Zodiac, we were darn close. And despite blockbusters taking over the cinema, there remained grimy little movies unafraid to broadcast their flirtations with the dark lord – The Devil’s Rain, The Omen, Mephisto Waltz and this largely forgotten little thriller — The Car.

I first saw this film in another way the 70s were different — we only had five channels. ABC, CBS, NBC, PBS and a new pay channel – HBO. And unlike the HBO that you know and love today, there were no original series or blockbuster films. Just around 15-20 movies a month that would play again and again and, well, again. Anyone that grew up in the halcyon days of nascent HBO can recite many of them by heart: Flash Gordon, Sharkey’s Machine, Superfuzz, Scavenger Hunt, They Call Me Bruce and The Car. I can personally claim to have seen this film over 280 times, perhaps because the summertime was all reruns when it originally aired and perhaps because it was my grandfather’s favorite movie (until Terminator 2 came out and that is a story for another article).

You’ll notice another difference about 70s movies right from the start of this film — kids aren’t just put in danger to scare the audience. No, in 1977, movies just outright killed kids two minutes into the movie and we sat there in mortal terror, watching jaws agape.

Let’s back up a bit. The hero of The Car is, quite literally, The Car. A George Barris customized 1971 Lincoln Continental Mark III (Barris also created the 60s Batmobile), the secret of The Car appears to have no driver at the wheel…unless you count Satan! It has a blaring horn noise that is based on the Morse code for the letter X and it shows up just blasting that horn when you least expect it.

Don’t take it from me. Take it from the two kids, a hitchhiker and the sheriff that it smooshes. After that nice little spot of multiple vehicular homicide, The Car goes after an entire marching band and their leader Lauren (played by Kathleen Lloyd, who you may remember from It Lives Again, a sequel to It’s Alive), chasing them the whole way to a cemetery. It turns out The Car can’t cross hallowed ground, so she stands and insults it and calls it names. That leads to her boyfriend Chief Deputy Wade Parent chasing the car, shooting at it and tries to get into The Car, only to discover that it has no doorhandles.

Oh — if you’re watching horror for beefcake, let me alert you. Amityville Horror star James Brolin stars as Wade and you all know that he’s going to smolderingly gaze at the camera. What I didn’t know is that Brolin was almost Bond for Octopussy (one could argue he played a Bond/Pee Wee Herman mashup in Pee Wee’s Big Adventure)! Or how deep my straight man Brolin-mance went! I kid!

To protect Lauren, the Chief Deputy puts roadblocks all around her house. But The Car will not be stopped. While she’s on the phone with Wade, it leaps through the air and into her house, killing her. Yep — the 70s again, when no one makes it out of movies alive, even the ones you think will.

A grief-stricken Wade lies in his hospital bed, where he concocts a plan — to lure The Car into a mine shaft and blow it up real good. But oh, the brains behind that automobile. It’s already waiting in Wade’s garage! A chase through the desert ensues, where The Car finally is lured — by Wade and his deputy, played by Robocop and Total Recall’s Ronny Cox — into driving off a cliff where it is detonated by case after case of dynamite. Why did Jazz and Amos and all the other cops have so much TNT? Again — it was the 1970s. And even more importantly, if it seems to you that this movie is only an hour long and not packed with story, you’d be right.

Then comes the most hotly debated moment of this film amongst my family, as a demonic face is glimpsed in the smoke. My grandfather held fast to his belief that The Car wasn’t Satanic and was quite moral, as he only killed people who swore at it or disrespected it. Even at a young age, I was all for The Car being an amoral Son of Baphomet. 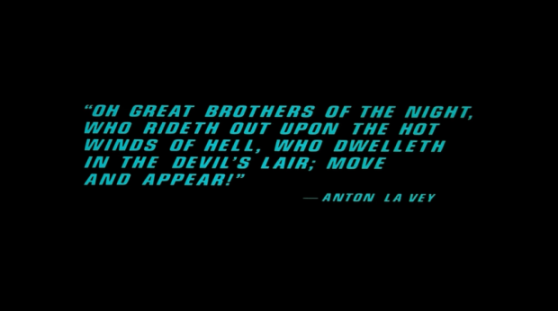 Of interest to the more occult minded readers out there, leader of the Church of Satan Anton LaVey was the technical consultant to this film, lending his quote “Oh great brothers of the night who rideth upon the hot winds of hell, who dwelleth in the Devil’s lair; move and appear,” to the opening. One wonders what exactly the self-styled Doctor did on this B-movie potboiler other than sit in a chair in the shade and opine on breasts, the inherent Satanism of “Yes, We Have No Bananas” and Cecil Nixon’s Isis automaton.

Some cuts of this film show The Car surviving, slowly gliding through the streets of LA. And best of all, Kenner nearly made a toy of The Car! Yes — this scare fest for adults, one that kept me up at night way into the early 80s — was almost a toy. That said, despite the cancellation (one imagines after Kenner got blasted for making Alien toys that whomever was behind these adult movies being made into toys was promoted to President or, more likely, fired) Ertl made a collector-friendly large-scale toy in the early 2000s.

Image above courtesy of PlaidStallions.com

One final family related post-script. For years, my grandpa had an El Camino and had altered the horn to sound EXACTLY like The Car. Upon arriving home from a long day in the steel mill, he would drive up the front yard, right up to the front window, ruining his grass, honking that ominous horn and screaming, “THE CAR IS HERE! RUN!” He did this at least five times that I can remember and surely, it was more than that. Ah, memories.