Samantha Connelly (Erica Tazel, Justified) is a single mom and a career woman who feels that she’s missing out on life. Then she meets Giselle Christophe (Natasha Marc), who is everything she isn’t: confident, outspoken and sexually up front. In just a few weeks, Sam has stopped hanging out with her old confidant Kiki (Tanya Chisholm) and is out every night and living it up, just as her firm gives her the opportunity to defend football star Jaden Turk (Blue Kimble) from a scandalous divorce. But then someone with a carnival mask starts showing up outside her door, Giselle starts getting scary and things get all Lifetime but on Tubi, which of course means that the sex gets amped up a bit. 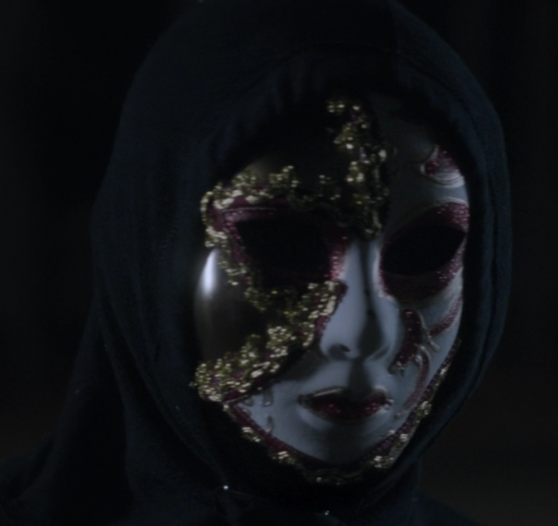 Do you like junk food? Well, this is a salty snack for your eyes and mushy brain. Seriously, this is a movie that starts in a legal office and ends with its main character holding a rifle on two women who want to be her best friend no matter what.

One night, Sam and Kiki go to a bar and that’s where Sam decides to stop being so chaste and hooks up with Clay Davis, who ends up assaulting her outside the bar. Giselle ends up saving her by beating the man unmercifully, leaving him bleeding in an alley. And that’s how friendships in Lifetime movies — and Tubi originals — get their start.

Things get so much better for Sam, as she gets a new man named Miles (Stephen Wesley Green). This causes her to distance herself from Giselle, who may be a wild hang, but is an exhausting full-time friend. Giselle responds by showing up at Sam’s house at odd hours, flirting with Sam’s son Tony (Zuri Soyinka) and even taking a job in Sam’s office as the assistant to her boss Monty (Douglas Dickerman).

The final straw in the friendship between the two women happens at an Eyes Wide Shut nightclub sponsored by Party City. Does Sam end up making out with her athlete client? Do the photos of their steamy dry humping end up being shown in the divorce deposition? Does Miles end up dead potentially at the hands of Giselle? Will Jaden get killed too and it looks like Sam did it? Which bad friend will be the worst one?

The Deadliest Lie was directed by Ruth Du and written by Mitchell Altieri, who made The Hamiltons, the remake of April Fool’s Day and The Nightwatchmen. This movie is exactly as trashy as you would hope that it would be, a film full of people acting badly and props being as cheap as possible, all building to a conclusion to can see coming. But come on, it’s like eating the best Chex Mix ever and having a bowl that keeps getting filled over and over again.