DAY 3. STOCKED UP: When you’re in it for the long haul, you’re gonna need supplies. Watch something with a supply run in it.

As we entered the dumbest and most boring apocalypse ever this year, I discovered that every plan, every zombie escape strategy I had, none of it mattered. Instead, I would sit in my living room and watch moronic leaders fight over whether or not we would wear a mask, people willing to die to eat at TGI Friday’s and actual liberty get booed by people who shouldn’t even be allowed to sit in the stands at a football game.

If George Romero was around, he wouldn’t be surprised, other than the fact that our end is so bloodless, so pointless, so vanilla.

I watched Dawn of the Dead so many times that I could recite it at will in high school. Obviously, my goal was not to get laid. It was to study this movie over and over.

While the rest of the world had to wait until now for the end times, Pittsburgh knew it was real long before, when our church of commerce was taken over in the middle of the night by a bunch of maniacs and filmed evidence would confirm every one of our greatest fears. Like Pogo told us we met the enemy and it was us. It still is.

Where Night of the Living Dead took place inside a cramped farmhouse, Dawn would take place in Monroeville Mall, a place that now has a bust of Romero and a photo of Dario Argento that refers to him as a “castmember.” The humor of this caption makes me overjoyed. 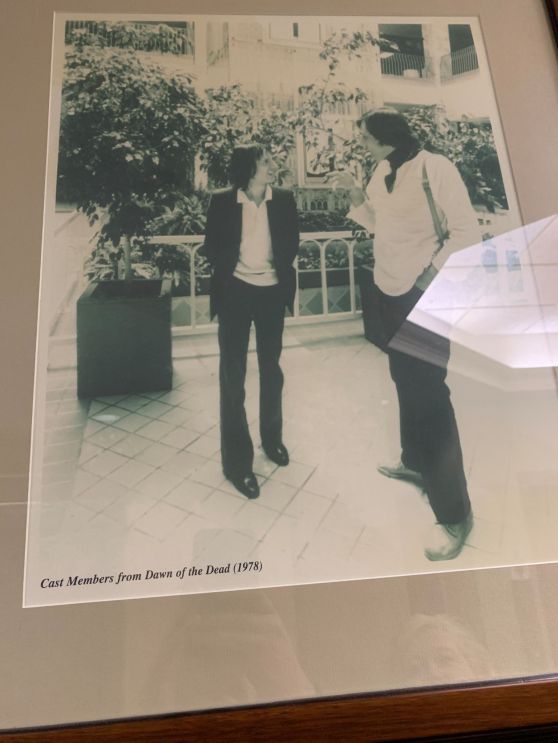 Romero knew one of the mall’s developers, who showed him the secret areas behind the mall, and told the director that people could survive a disaster inside the mall. He now had an idea for the movie, but he couldn’t find anyone in America to help make it. That’s how Dario Argento came in and made his way to Pittsburgh.

Shooting from 11 PM to 7 AM, when the holiday music would come on and couldn’t be stopped, the filmmakers — joined by a creative cast and crew, including special FX maniac Tom Savini*, made a movie that influenced the whole world and every horror film that would follow in its wake.

Stephen “Flyboy” Andrews (David Emge, Hellmaster) and Francine Parker (Gaylen Ross, Creepshow) are planning on stealing the traffic helicopter from the TV station they work at and escaping Philadelphia. They’re joined by SWAT officers Roger DiMarco (Scott Reiniger,  Knightriders) and Peter Washington (Ken Foree, who is in so many horror movies, but let’s go with Death Spa) and land in Monroeville, hiding inside the mall and clearing it of the undead.

All the consumerism is too much. The living dead want to get into the mall, remembering their past lives, which were simply consuming. Now that money doesn’t matter, nothing that was worthwhile in the mall does either. The foursome decides to leave, but Roger has grown too reckless and is bitten. And one night, a gang of motorcyclists break in and allow the zombies to crash through the barricades. Stephen, angry at his loss of home, flips out and kills several bikers before he is bit.

As he turns and follows his former friends into their hiding place, the urge to give up is too much. Originally, Peter would shoot himself and Francine would walk headfirst into the helicopter blades. But in the small window of happiness here, the pregnant heroine lives as the black cop decides to stay alive and save her. We see them fly away to an uncertain future.

While the American version of this film is 127 minutes and features a mix of library music and the Goblin soundtrack, Dario Argento’s Italian cut, known as Zombi, features more of Goblin and cuts out any of the film’s comic book humor, concentrating on providing more action. It would lead to a revolution in Italian horror, of course.

I’ve debated featuring this movie on our site for some time. It means so much to me, but I didn’t know what else I could say about it that hadn’t been said. Yet today, as I sit here and wonder just how bad the world is going to get by the end of this year, I see that the zombie apocalypse that I spent my life preparing for — influenced by this movie — is almost preferable to the Fourth Reich or Civil War that we seem to be heading toward. I can only hope that a few years from now, I’ll read this and laugh at all the hyperbole. Or maybe I’ll be fortifying the Exchange on Miracle Mile, surrounding my wife and myself with guns, DVDs and all the supplies we need to survive. Because after all, when there’s no more room in hell, the dead will walk the Earth.

*Nearly every stunt in this movie was done by Savini and Taso N. Stavrakis, including a dive over a rail that led to the effects master nearly breaking his legs when he missed his mark.